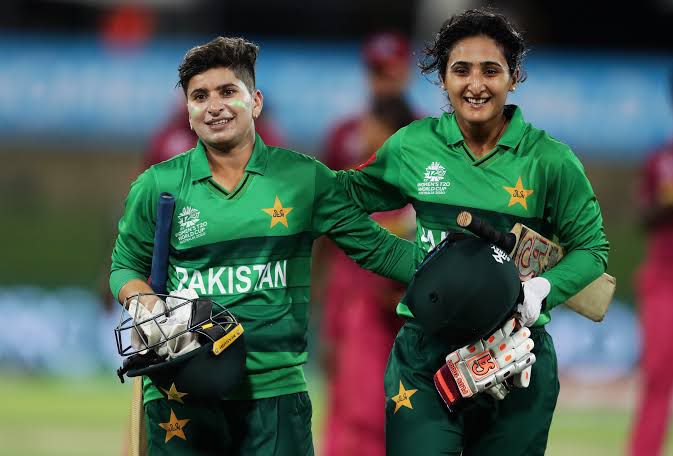 The Pakistani women’s cricket team has won its first world cup series in 13 years after 18 consecutive losses. Nida Dar stood out as the star of the show. She successfully secured the title of the Player of the Match and made us proud as a nation.

Following the news, internet users congratulated the women in green for their latest achievement. Pakistan secured their first victory of the 2022 ICC Women’s Cricket World Cup by beating the team West Indies by eight wickets in Hamilton, Ontario.

Nida Dar wrote in a tweet, “Alhamdulilah! So happy to contribute to the team’s win. This will remain one of the most memorable moments of my career as we registered a cricket world cup win after 13 years.”

Alhamdulillah! So happy to contribute to the team's win. This will remain one of the most memorable moments of my career as we registered a @cricketworldcup win after 13 years.

Captain Bismah Maroof wrote in a tweet, “Alhamdulillah! happy to get the much-needed win in the #CWC22 after two close games against SA & BAN”.

Alhamdulillah! happy to get the much needed win in the #CWC22 after two close games against SA & BAN.

While Nida Dar helmed our hearts with her performance, her victory Shahid Afridi pose was a winner, especially on Twitter

Here’s to hoping that the Pakistani team will give their best in the upcoming matches and raise our heads with pride. This victory will serve as a path for other women cricketers to follow.

Pakistan women’s cricket team pacer Fatima Sana became the International Cricket Council’s (ICC) “Women’s Emerging Cricketer of the Year for 2021”. She also became the first woman to win an ICC accolade by achieving the title. As per the statement issued by ICC,  Sana “impressed one and all with her all-around efforts in 2021. She became an integral part of Pakistan’s ODI and T20I side owing to her wicket-taking ability as a bowler and ability to …