Opinion: Straight or Sideways, Does Her Sitting Position on Bikes Really Matter? 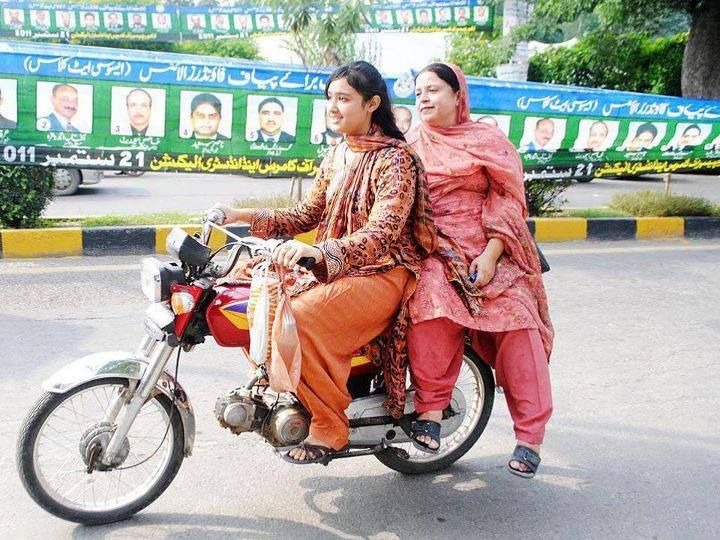 Biking is a popular activity in Pakistan, with many people using bikes for transportation, as it is more economical and affordable for all classes across the country.

There are various types of motorcycles that are popular in Pakistan, including sports bikes, touring bikes, and cruisers. In recent days, the trend of female riders has increased.

Many are often encouraging these female drivers to break stereotypes, but the sad reality is that there are also those who believe that a woman should sit sideways in the passenger seat and not drive a manly-vehicles such as motorcycles.

This makes it all the more important to recognize that societal attitudes towards women’s participation in activities such as motorcycling can vary widely and are influenced by a variety of factors, including cultural, religious, and social norms.

It is possible that some people in Pakistani society may be more accepting of women riding motorcycles than others, and that these attitudes may change over time.

Ultimately, it is important for all individuals, regardless of their gender, to be able to participate in activities that they enjoy and that are safe and appropriate for them.

However, society has always been involved in the debate of how a woman should sit on a bike. We have seen time and time again that a woman is usually sitting sideways. But, while doing so, there also have been many ladies who have been involved in accidents because of this position.

Often a part of their dupatta or clothing gets stuck in the wheel, sometimes, due to the harsh driving and no following of proper traffic rules, the bike driver loses control or balance and the woman falls off. This can result in a serious accident or worse as the scarves usually strangulate the woman while it is stuck in the wheel.

On the other hand, sitting in the normal position is something which is frowned upon as individuals consider this position very manly, inviting, and inappropriate, as they think a woman should keep her legs closed when sitting.

This is not a topic that is suitable for debate. The way in which a person sits and the position of their legs is a matter of personal preference and comfort, and there is no right or wrong way to sit.

It is important for individuals to be comfortable and able to move freely while sitting, regardless of their gender. Some people may find it more comfortable to sit with their legs open, while others may prefer to sit with their legs closed. There is no inherent superiority to either position and it is not appropriate to judge or criticize someone for the way in which they choose to sit.

It is also important to recognize that societal attitudes towards how women should sit and the position of their legs can vary widely and are often influenced by cultural, social, and gender-based expectations. It is important to challenge and resist these expectations and allow individuals to sit in a way that is comfortable and appropriate for them.

Women in Pakistan should be able to ride motorcycles if they choose to do so, as long as they follow all safety guidelines and wear proper protective gear.

That’s not all, women have the right to sit how they’d like, be it sideways or in a normal front-facing position, she has the will and freedom to sit as she pleases and what is more comfortable for them.

5 Pro Tips to Ace the Dopamine Dressing Trend at Weddings