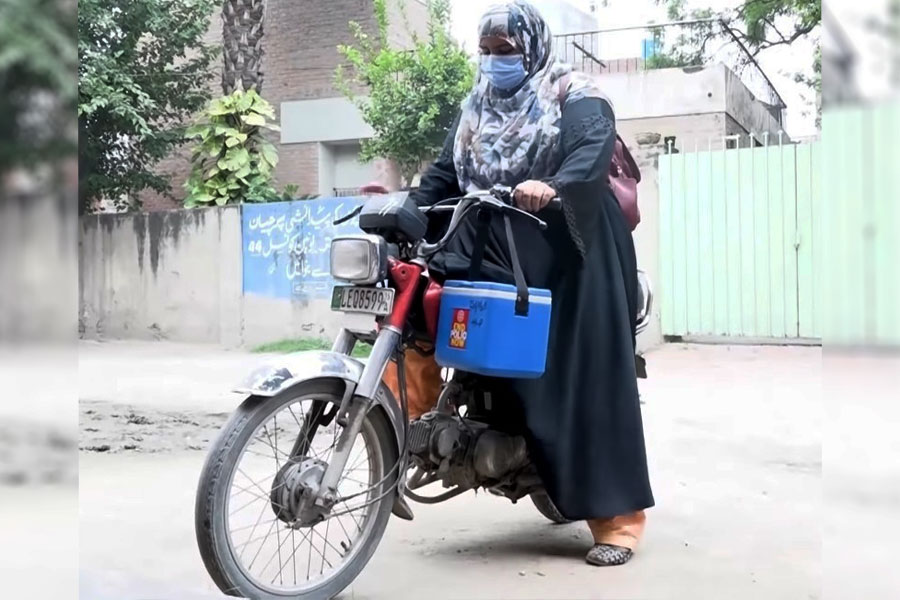 Ilyas is a Shiza Ilyas lady health worker from the Fateh Garh area of Lahore. While talking about the surge in cases, she shared, “It is our national duty to reach out to every child to vaccinate him against polio to save our future generations from the crippling disease.”

She is breaking stereotypes by driving door-to-door fulfilling her anti-polio drops mission on a bike in a society where bike riding isn’t considered suitable for women.

“The appearance of new cases in Lahore this year is a major concern for polio workers and health authorities,” she added.

While talking about the difficult nature of her job, she shared that polio workers are not welcomed by people. “Sometimes they shout at us for coming again and again. I know it’s just not a call of duty, it’s a national cause and the role of polio workers is pivotal to the dream of achieving a polio-free Pakistan.”

She shared that mothers often don’t answer the door, and sometimes elderly men and family members swear and yell at the workers, regardless of their gender, “We have to put up with insults often in the area but we know this is part of the work,” she said.

Shiza regrets that neither the contribution of polio workers gets recognised nor they get due acknowledgement. “Answering conspiracy theories and providing the counselling is the hard work,” she said.

Shazia’s service and bravery are commendable. Not only is she working towards a positive Pakistan but is also breaking stereotypes. She has taken up a difficult task and is giving her 100% hard work and commitment.

We’d like to appreciate her family for supporting her decision, as her nana was the one who taught her how to ride a bike.

This Clothing Brand is Giving Nikkahnama Awareness, Asking People to Read Before Signing It