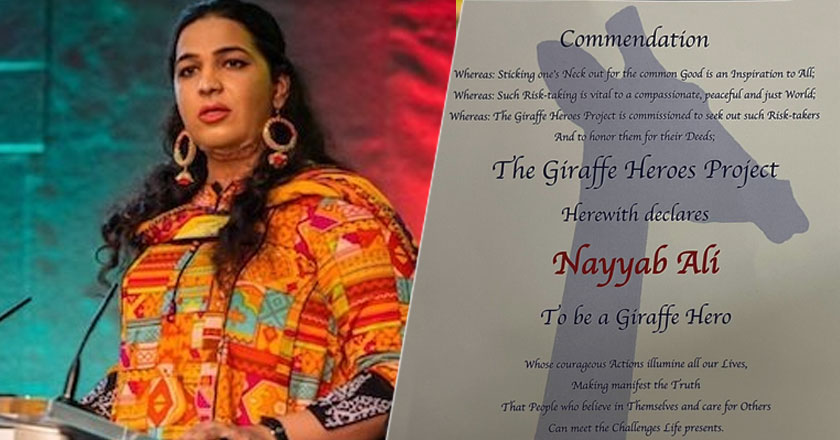 The nonprofit honours Giraffe Heroes—compassionate risk-takers who are largely unknown, people who have the courage to stick their necks out for the common good around the world.

Received global recognition “Giraffe Hero Commendation- awarded to people who stick their neck out for common good” by #TheGiraffeHeroesProject . I am feeling truly honoured upon receiving this award all the way from United Stated. A special thank to @ann_medlock , @SherkanMalik pic.twitter.com/2Lv8MXAQNM

They are men and women, young and old, from every ethnic and economic background, and they’re tackling every public problem you can think of, from environmental pollution to gang violence.

Nayyab Ali was chosen for her contributions as an unsung hero. The post on their Facebook page reads:

Nayyab Ali is a champion for her fellow trans Pakistanis, advocating for their rights in public talks, and managing a program she’s created to provide them with job training and a support system. Director of a Transgender Protection Unit of the Islamabad police, Ali has been threatened, sprayed with acid, and beaten up in a home invasion. She recently sued a colleague in the police department for pulling a gun on her saying, “if we cow down to these threats and these acts of violence, we will only allow people to oppress us even further.”

Nayyab Ali is a transgender rights defender and Chairperson of the All Pakistan Transgender Election Network. She also manages the ‘Khawaja Sira Community Centre’ in Okara, which offers a basic literacy and numeracy programme, vocational training, life skills education and driving classes for the transgender community.

In 2018, Nayyab was one of the four transgender candidates who ran for Pakistan’s general elections. Nayyab has also been leading the advocacy efforts for the approval of Pakistan’s National Transgender Rights Protection Policy.

Pakistan became one of the first countries to legally recognise a third sex on its national ID cards almost a decade ago and extended this to its passports in 2017. However, discrimination and violence persist. Nayyab herself has also faced numerous threats and physical attacks, and she survived an acid attack.

She has been recognized for her efforts in the past as well. She received the Franco-German Human Rights Prize in 2020, The Galas Award in 2020, and was featured in BBC in 2018 in an article titled ‘The Transgender Acid Attack Surviviour Running for Parliament’.

We’d like to salute Nayyab for her endless contributions towards the Khawajasira community and hope that one day her tremendous efforts will pay off.

Opinion: Straight or Sideways, Does Her Sitting Position on Bikes Really Matter?