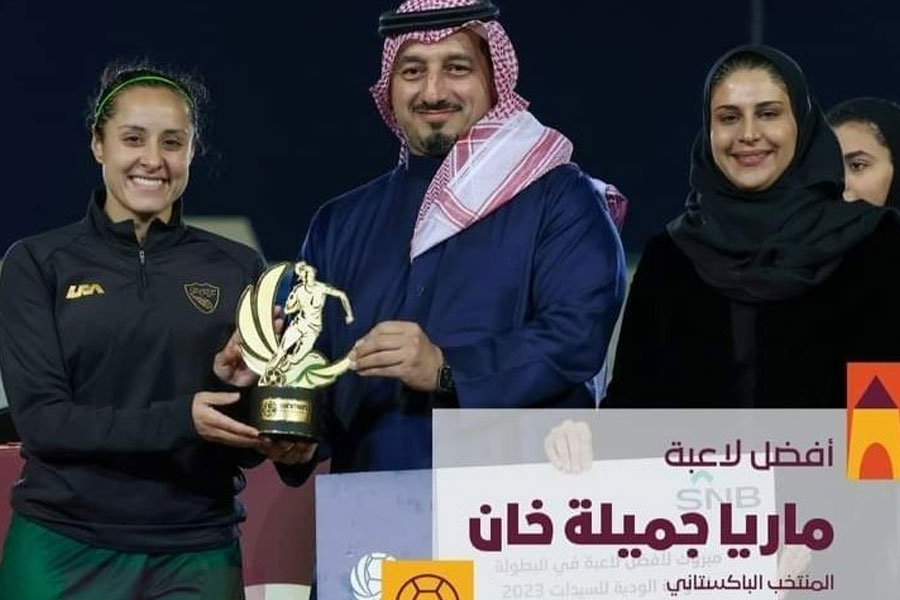 Pakistani footballer Maria Jamila Khan has taken over social media as her captivating goal against Saudi Arabia levelled the playing field for her team at the 4-Nation Women’s Football Tournament.

In the first half, Saudi Arabia took a 1-0 lead. The hosts won a free-kick inside their own half and it was put into Pakistan’s half, which was anticipated by Pakistan’s defender but Saudi number nine Albandari Mubarak was quick and sharp as she snatched a loose ball ran into the box to place the ball into the right corner.

However, Khan’s goal during the free kick in the 65th minute levelled the play for Pakistan giving them a chance to come back into the game and resulting in a draw.

Khan, also the skipper of Pakistan’s women’s football team gave an empowering speech at the end of the match that has also gone viral.

The Pakistan Football Federation (PFF) uploaded a video where the Pakistan skipper gives an emotional speech after the match,

“If this tournament doesn’t show you that we belong, I don’t know what else will. Every one of you stepped up when you needed to step up. Every single sub that came on made a difference in the game. This is the standard and we are only gonna get better. Now that we have seen that every single one of you can step up, guys, it’s only up from here. Upwards and onwards,” she said in the video.

Watch as captain Maria Jamila Khan delivers a speech that embodies the soul of women’s football in Pakistan!

Moreover, she was awarded the ‘Best Player’ award for her outstanding performance in all the games. Pakistan won their first match by 1-0 against opening team Comoros before they lost to Mauritius by 2-1.

Here’s how netizens reacted to the goal:

Grand daughter of Hashim Khan and wont do wonders? Maria Jamila Khan for you!!! 🇵🇰🇵🇰🇵🇰 pic.twitter.com/PBy6lmC6zP

The way to lead! Team play giving is credit to everyone in the team! #Maria_Jamila_Khan's oration symbolizes the essence of how an exemplary leader can take out the best in everyone. @mariajamilakhan well done. It is never about #me or #my_dream it is about the team! pic.twitter.com/MBurj6u40Q

Zameer Ahmed Malik took to Twitter to pen: So proud to see that Pakistan stands at a road leading towards progress.  Maria Jamila Khan and these all-girls are a symbol of progress for all of us.

So proud to see that Pakistan stands at a road leading towards progress. 🙌 Maria Jamila Khan and these all girls are a symbol of progress for all of us. https://t.co/6VEIiv86Yt

The American-born Pakistani professional footballer is also the granddaughter of squash champion Hashim Khan. Maria’s goal was something out of the blue that not many expected.

Khan’s passion is driven by her mother’s support as she was the one who took her kids to football practices and even flew out to Nepal to support her daughter’s captaincy and the team.

Maria Jamila Khan is a third-generation Pakistani hero who is an inspiration to many Pakistani women and girls.

Kudos to Khan and the entire team.