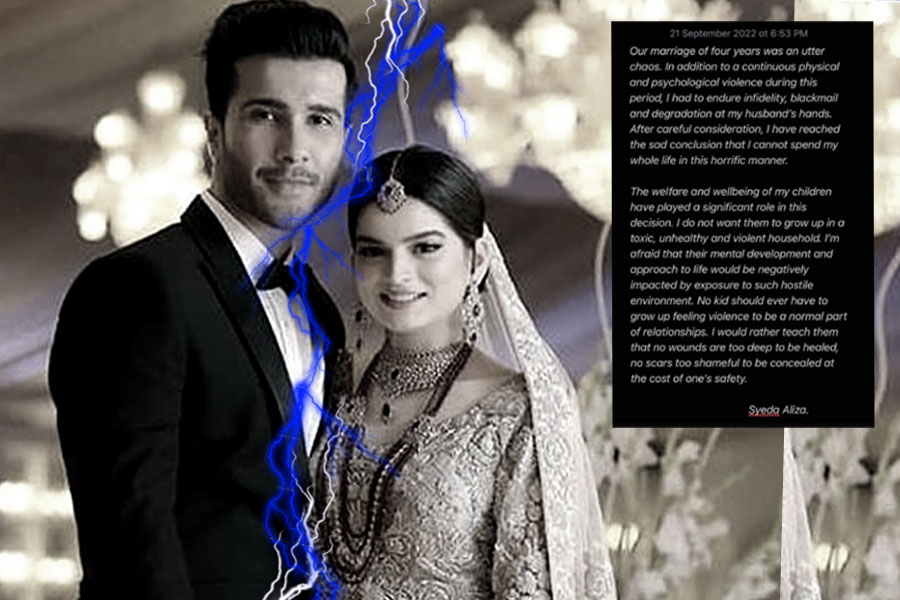 Feroze Khan has always been in the spotlight for his hit drama serials, stylish looks, need for speed, and so much more. However, Syeda Aliza first took the spotlight when Feroze was all set to marry her.

Since then, the couple has been in and out of the headlines. Parents of two beautiful children, the couple had their ups and downs but finally decided to part ways after 4 years.

However, after the news of the divorce, Syeza Aliza took to her Instagram to pen down an emotional note that mirrors her life for the past couple of years.

Our marriage of four years was an utter chaos. In addition to a continous physical and psychological violence during this period, I had to endure infidelity, blackmail, and degradation at my husband’s hands. After careful consideration, I have reached the sad conclusion that I cannot spend my whole life in this horrific manner.

The welfare and wellbeing of my children have played a significant role in this decision. I do not want them to grow up in a toxic, unhealthy and violent household. I’m afraid that their mental development and approach to life would be negatively impacted by exposure to such hostile enviornment.

No kid should ever have to grow up feeling violence to be a normal part of relationships. I would rather teach them that no wounds are too deep to be healed, no scars are too shameful to be concealed at the cost of one’s safety.

This not tells us that Syeda Aliza has been a victim of domestic abuse, moreover, she has had to face significant emotional trauma and damage along with physical torture.

Indeed as she has written, no child deserves to grow us in a toxic household, and no husband or wife deserves to be a victim of such tragedy.

On the other hand, Feroze Khan has also responded with a statement. He pens:

Our hearts go out to the family and pray that they find the courage and ray of hope to move forward.