Pakistani Feminist Comedians are Challenging Taboos & We Are Loving It! 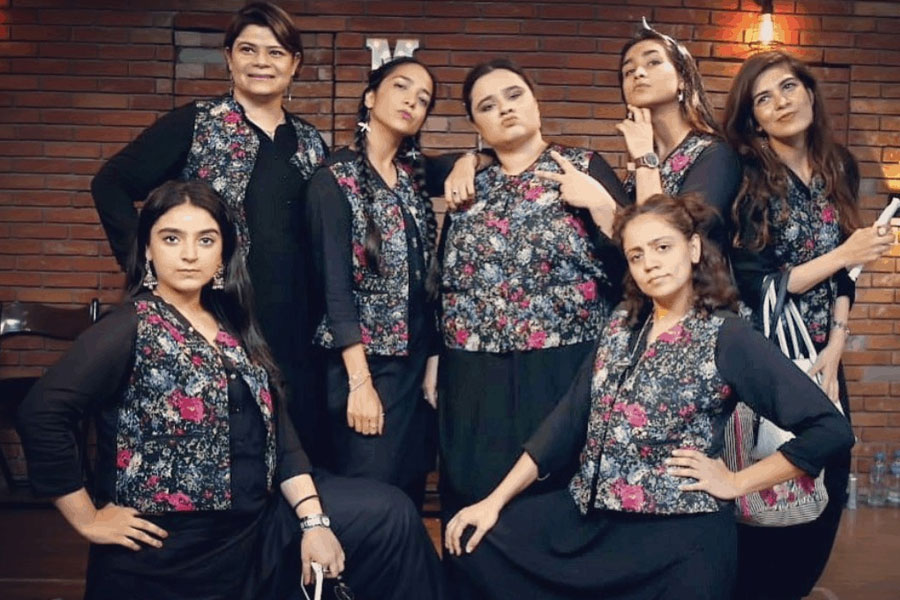 Imagine waking up one day, buying tickets to watch a group of female comedians, laughing with a few and relating almost all topics, from periods to sex, harassment, misogyny, body shaming, dating, honour killing, and more.

Until some time ago, it was impossible, however, The Khawatoons, Swineryy, and other female comedians are challenging this norm and breaking stereotypes by proving that women also have a damn good sense of humour.

Packaged as ‘comedy’ families and friends come from different areas and even cities to watch these daring women perform on the stage. Often, women are the subject of jokes and are kept away from the spotlight as male stand-up comedians have reigned this territory for a long time.

Amtul Baweja, 31, digital content creator and comedian, has been performing since 2011, she didn’t feel comfortable doing comedy despite having the talent until she joined an all-women comedian group called The Khawatoons, in 2016.

My confidence boosted performing with women. Before comedy felt very male-dominated, and automatically men would take the funnier roles or the audience would find the man funnier and make the woman feel like she was trying too hard. But with the troupe, we had to play all the roles, even the male roles and got so many laughs. –Baweja told DW

Faryal Mehmood to Star in Film Inspired by Qandeel Baloch

“Comedy for me is a sugar-coated pill that is bitter but easier to swallow. I mainly deal with issues related to women in my acts. Patriarchy, misogyny, taboos, emotional abuse, gender identity, and sexual preferences are some of the topics I usually raise in my sets,” Ahmed told DW.

“I speak about things I have experienced in life. I never ever talk about hypothetical things or situations. I think this makes my expression more genuine and convincing,” said Ahmed. As Baweja says: “We are reclaiming space. Even if one isn’t even talking about women’s issues, just being brave enough to stand up and speak is feminist. You are contributing to representation and equality.”

While women have been making waves in this industry, it is still hard for most of them to consider taking-up comedy as a full-time profession. “Over the past 10 years I’ve seen a lot of female comedians online, on social media, improv and stand-up, but we still have a long way to go. Many women don’t pursue it as a profession, as there is not enough scope for it, but I hope in the future, this will change,” said Saleem.

We hope that other women come out to support our friends with extra funny bones and break the norms that women and comedy don’t go hand-in-hand.

IYZIL: Female Safety App & Everything You Need to Know