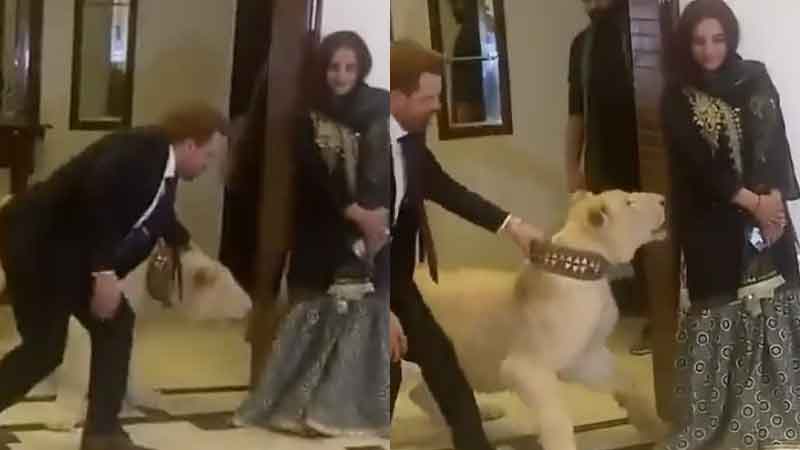 In a clip that is making rounds on social media, Shah is seen standing next to a lion. The wild animal isn’t let loose but handled by a man standing next to him who had him clenched by this collar which was strapped on its neck.

Using wild animals as props for photos is considered unethical. It has been done before for wedding shoots in Pakistan and condemned online. Shah doesn’t seem to be in Pakistan; regardless, no matter where you are, you need a lot of courage to be able to put yourself at such a significant risk.

Most organizations that home the wild animals for commercial activities often sedate them, so they don’t prove to be harmful to their guests. It is immoral to sedate an animal and illegal to do so. If a crime such as this is committed in many countries across the world, you can be punished with a hefty fine and even jail time.

Shah, who stood next to the animal, noticed his behavior towards her wasn’t normal. The lion was in a mood to attack her, but she stood in her place. Once it struck her leg, Shah started walking towards the other end of the room.

The men in charge were struggling to keep the animal in its place. It walked straight ahead from its initial spot and ended up stopping next to Shah, and after one last pause, it finally pushed itself towards Shah, almost devouring her as its next meal.   Lucky enough, the lion was controlled in time before Shah received any injuries.

A Sedated Lion was Used for a Wedding Photoshoot in Lahore & Netizens are Outraged. Read the full story here:

Desi weddings are crazy. They have been getting crazier and crazier every year; however, this time, a studio based in Lahore hit a new low after they deliberately sedated a lion cub to use it as a prop for a photo shoot. The pictures and videos surfaced online at the beginning of the week after someone recorded the snaps and pictures but have been removed now due to the severe backlash by the photographer.