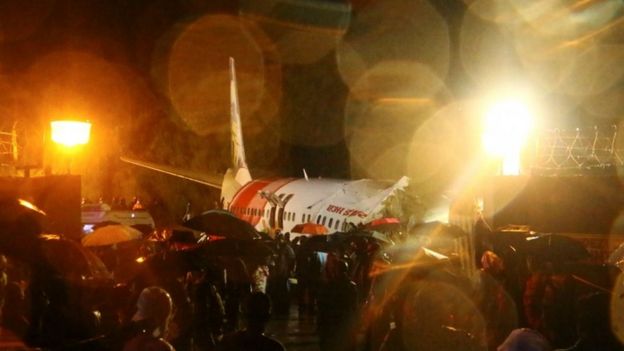 An Air India Plane has crashed at the Calicut airport- also known as Kozhikode; the southern state of Kerala, as it skidded off the runway during landing. The Dubai-Kerala flight had 191 people onboard; 16 have been reported dead so far, according to BBC news officials.

As the Indian Aviation authority reported, the plane ended up breaking into half as it skidded off and fell into a valley at the Calicut airport.

Emergency services have been deployed at the scene of the accident and rescue services are underway.

According to authority reports, majority of the people onboard the Boeing 737 flight have been evacuated and 35 of the injured have been shifted to hospitals. 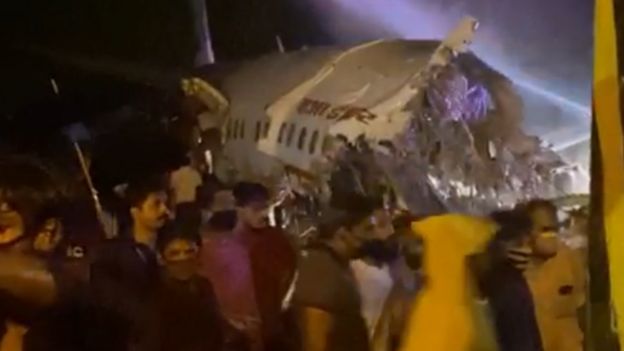 A politician from Calicut, MK Raghavan said that 16 people have died in the crash, according to BBC reports.  184 passengers boarded the ill-fated flight IX 1344, that comprised of 10 children and 7 crew members; 2 of them were pilots.

The flight was a government operation to bring back Indians who were stuck in Dubai during the COVID crisis. #Planecrash  and #Airindia have been trending on twitter ever since the tragic crash occurred:

Prime Minister Narendra Modi tweeted that he is “pained by the plane accident”.

Celebrities are sending heartfelt condolences after the incident:

My heart goes out to the passengers and crew members onboard the #AirIndia flight. Deepest condolences to the bereaved families who lost their loved ones. Thoughts and prayers…

#AirIndia Express flight incident in Kozhikode is disturbing.
My condolences to the families who lost their loved ones and prayers for the speedy recovery of the injured passengers.

Disturbed by the #AirIndia flight tragedy. My prayers are with all the passengers and crew members onboard and deepest condolences to those who lost their loved ones.

Praying for the safety of everyone onboard the #AirIndia Express Aircraft that’s overshot the runway at Kozhikode Airport, Kerala.
Deepest condolences to the families who have lost their near ones in this tragic accident.

Terrible news coming in that Captain Deepak Vasant Sathe, pilot of the #AirIndia flight, has died in today’s accident at Kozhikode. Deepest condolences to his family. 🙏🏽 Wing Commander DV Sathe was an experimental test pilot in the IAF before he joined #AirIndia. RIP, Sir.😖 pic.twitter.com/UcFp8qP45a

According to Directorate General of Civil Aviation (DGCA), the plane broke into two after falling into a valley when it skidded off the runway. The aviation regulator responded that there was ‘no fire’ reported at the time of landing. 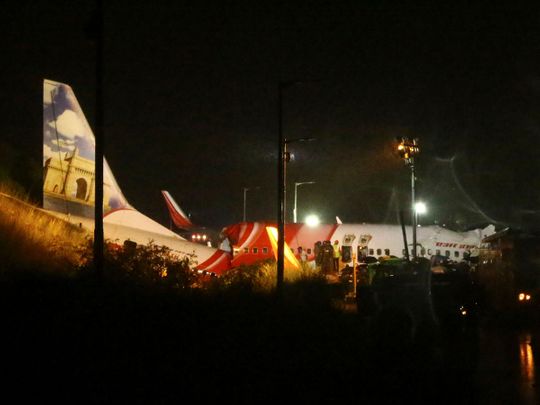 The incident occurred at approximately 19:00 local time; it was amid heavy rainfall that the flight landed, and the unfortunate accident occurred.

With over 500 mm rainfall in India, the nation has flooded, and landslides have occurred during the monsoon season.

“Distressed to learn about the tragic accident of Air India Express aircraft in Kozhikode, Kerala. Have instructed NDRF [National Disaster Response Force] to reach the site at the earliest and assist with the rescue operations,” Home Affairs Minister Amit Shah tweeted.

I remember the Mangalore #AirIndia crash as I lived in Karnataka in 2010, That time also the pilot had overshot the runway.
Why can't we make our airports safer? Why we shun the whistleblowers like @flyingbeast320 when they speak of the rot in the system. #planecrash

Less than a month ago Calicut airport got DGCA notice over safety concerns which included “excessive rubber deposits” – something that can be dangerous for safe landings in the heavy rains due to reduced friction.

Not sure if it was acted upon#planecrashhttps://t.co/0o7iaFt9h4

Several people were feared and reported dead in the Kerala region after severe monsoon triggered floods and landslide. Monsoon occurs annually during June to September in South Asia, wreaking mayhem every time.

A similar Air India crash occurred back in May 2010 when the plane shot Mangalore airport runway, killing 158 people. In July, a similar incident occurred and led to a detailed inquiry.

Stay tuned for more updates on the news!