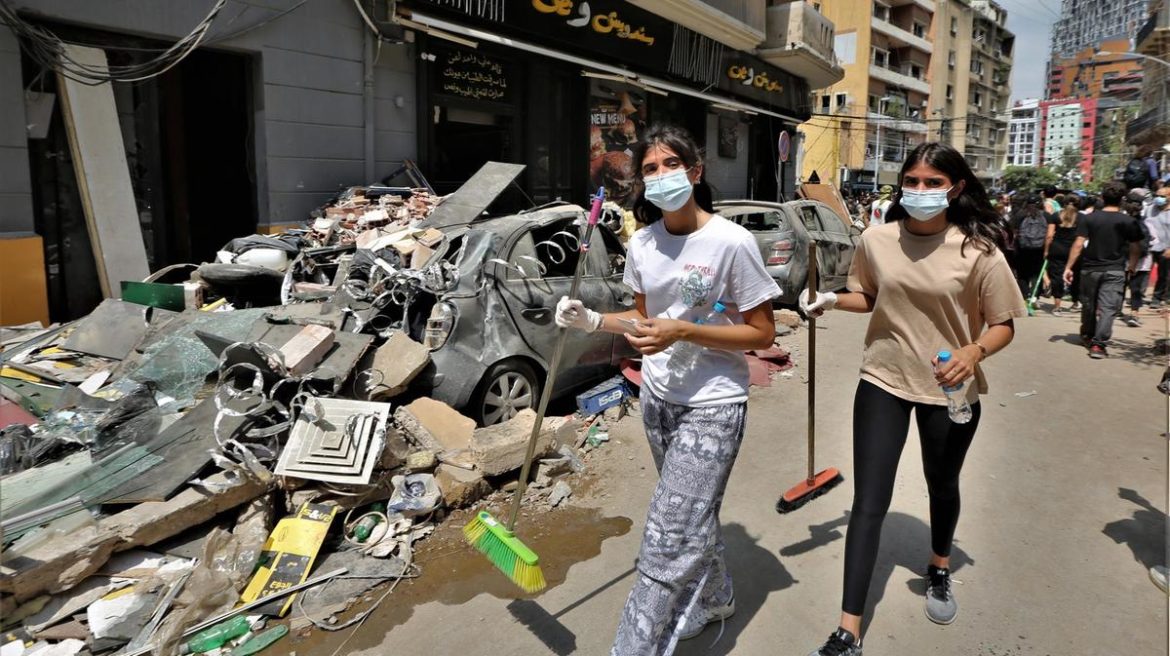 In the absence of a state sponsored clean-up operation, the youth of Beirut gathered to clean the city on their own, after a massive explosion rocked the capital of the Lebanon.

While being in mourning over the death of more than 100 people, the young volunteers took brooms, wore masks and gloves and joined hands to remove shattered glass from streets.

Wassim Kerbage, a 17 year old, from Chouf district in Mount Lebanon, who was coordinating the volunteer work at Gemmayze- the neighborhood that was once full of love, life and colorful people from all over the world, told Xinhua:

We are carrying our brooms to help the people affected by the explosions. We will go to their houses to clean up the rubble and broken glass

#Beirutblasts : Lebanese volunteers band together to clean up and give aid
A spontaneous cleanup operation was underway after the huge blast at Beirut's port#Beruit #RebuildingBeruit #Lebanon #Lebanese pic.twitter.com/O3Q3csGshQ

Thousands of volunteers from all over Lebanon have come to Beirut to help with the clean up. #lebanon pic.twitter.com/mFibUmbd8q

A high school student Mia who came with the 100 volunteers from all over Lebonan to clear the rubble and glass, said:

It breaks my heart to see these people who lost their homes.

“I feel that I have an obligation to help the capital of my city. I feel the pain they feel”, said Reem, another student volunteer.

These volunteers removed broken furniture and glass pieces from a flat situated on the first-floor, which was destroyed by Tuesday’s blast.

The windows of the flat were blown with immense force, breaking the bedroom doors of the flat, including a child’s room. The room had pink walls, and the toys and dolls were all strewn on the floor, staining the corridor and bathroom with blood.

Watch: In #Beirut's beloved bar districts, hundreds of young Lebanese ditched beers for brooms to sweep debris in the absence of a state-sponsored cleanup operation following the deadly blast.https://t.co/b0Q1Eogw5W pic.twitter.com/GOjZd8AWhE

Two major blasts shook Beirut Port on Tuesday at around 6:10 p.m. local time killing 154 people, injuring 5,000 and several still missing under the rubble. The tragically devastating blast shook buildings, leaving most of the residents in need of rehabilitation.

Watch: In #Beirut's beloved bar districts, hundreds of young Lebanese ditched beers for brooms to sweep debris in the absence of a state-sponsored cleanup operation following the deadly blast.https://t.co/b0Q1Eogw5W pic.twitter.com/GOjZd8AWhE

A member of the Union of Progressive Women, Rima Abou Khzam said that her organization is working with Beirut’s municipality to analyse the damage caused to houses and buildings in Gemmayze, which is the most affected neighborhood because of its proximity to the Port of Beirut.

When we finish statistics, we submit them to the municipality which would secure support for the people whose houses were partially or totally destroyed, Abou Khzam said.

Can't express the sadness i felt during the cleanup today!
This is so sad..🥀💔
I am so proud of the lebanese people that are helping eachother🙏 pic.twitter.com/Q1AFxhINCA

Governor of Beirut Marwan Abboud, earlier revealed that the damage cost the city between $3 billion to $5 billion in material losses. Moreover, as Beirut’s municipality reported, more than 300,000 have lost their houses in the explosions. The president of Lebanon, Michel Aoun said on Friday that reconstruction will start soon.

#UPDATE The blast in Beirut killed at least 137, left dozens missing and at least 5,000 injured.

A spontaneous cleanup operation is underway, a glimmer of solidarity after a devastating night. A few civil defence workers could be seen, but were vastly outnumbered by volunteers pic.twitter.com/OE5QHHTyYh

We don’t know much about government’s help, but the locals of Beirut have shown true solidarity in a tough time. The locals have been providing aid to the affected, while the neighboring towns have opened their homes to residents who have lost their houses.

Vid of @basmehzeitooneh crew cleaning up houses in #MarMikhael in #Beirut today – cleanup is part of what they are doing. They’ll be back at it tomorrow. Give if you can 🙏 pic.twitter.com/v98IEVxoJi

The spirit of Lebanon is the true reflection of humanity!

Beirut is in our thoughts and prayers; here is to wishing and praying they heal from this tragedy soon.