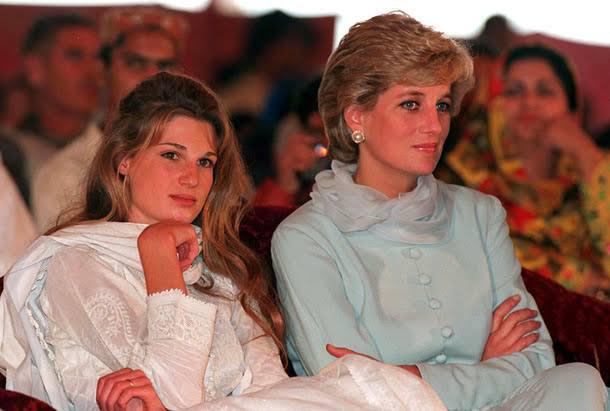 Premier’s ex-wife, Jemima Goldsmith, has called for the removal of all her contributions to Netflix Series the ‘The Crown’.

As Lady Diana‘s close friend back in the day, Jemima believes that the Netflix series, ‘The Crown,’ has not portrayed the Princess “respectfully or compassionately.” The streaming giant’s screenwriters failed to represent the People’s Princess as she had hoped.

The series has put forward a ‘disrespectful’ attitude towards Princess Diana’s legacy. For those of you who are not aware, Jemima, a former journalist, participated in making the show as an advisor to British screenwriter Peter Morgan. He wrote the fifth series on years leading up to Diana’s death in Paris car crash in 1997.

Jemima provided information about Princess Diana’s relationship with Hasnat Khan and Dodi Fayed,  the son of the billionaire owner of Harrods, Mohamed Al-Fayed.  Those years also include the infamous Panorama interview with journalist Martin Bashir.  Diana said during the interview while referring to Camilla Parker Bowles: “Well, there were three of us in this marriage, so it was a bit crowded.”

Jemima has “declined a credit” after working on the storyline from September 2020 to February 2021.

In her interview with Sunday Times, she confessed, “When our co-writing agreement was not honoured, and when I realised that particular storyline would not necessarily be told as respectfully or compassionately as I had hoped, I requested that all my contributions be removed from the series and I declined a credit.”

Later on, a spokesperson for Netflix gave a statement that said, “[Jemima Khan] has been part of a wide network of well-informed and varied sources who have provided extensive background information to our writers and research team.” As per the statement, Jemima was asked to provide context, “she has never been contracted as a writer on the series.”

Sajal Aly, Jemima Goldsmith, Shabana Azmi Spotted on the Sets of What’s Love Got To Do With It? Read the full story here:

Sajal Aly, Jemima Goldsmith, and Shabana Azmi have been spotted on the sets of Jemima Goldsmith’s upcoming romantic comedy ‘What’s Love Got To With It?’. Jemima and Sajal both took it to their Instagram to update fans with a sneak peek of the duo onset.  The former wife of PM also posted a picture with Indian actress Shabana Azmi on her insta stories later.