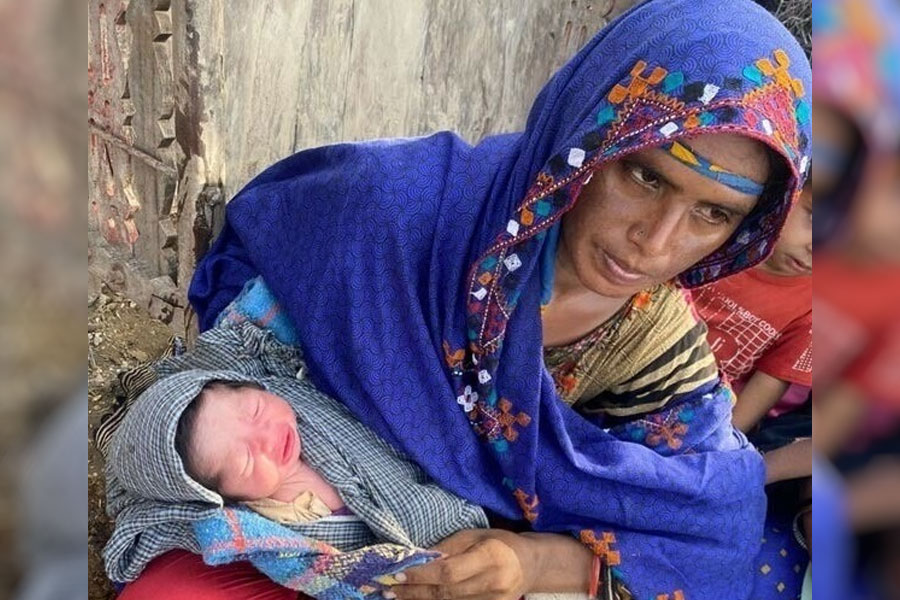 In one of the flood-affected areas of Sindh’s Qambar Shahdadkot District, a flood survivor gave birth to a baby boy beside a pile of rubble, which once used to be her house. The newborn spent his first day in a truck travelling with his mother and family in search of a safe place.

Hundreds of thousands of families have been displaced during the flooding leaving almost 1,000 dead nationwide.

Muridaan Bibi cannot afford the “luxury” of post-partum rest. She was preparing to travel in a truck in search of a safer place, a local tv channel’s reporter shared.

Named after his late grandfather, Khiarullah and his family have been trying to find a safe location to settle down. The woman’s family said they were leaving for Kotri, where Muridaan Bibi could likely see a doctor.

Unfortunately, the residents of Junan Village are facing a situation of shortage of food and clean water, as well as shelter.

Locals are in need of tents, medicine, and mosquito nets to survive floods and avoid falling sick as water-borne diseases are expected to cause more havoc in the upcoming weeks.

As per the latest statistics, Sindh has reported the most deaths and injuries – a total of 341 people, including 118 children and 49 women have died and at least 1,126 people have been injured in the province alone.

Khairpur reported the most number of deaths – 49, followed by Naushahro Feroze, which reported 36 deaths, Larkana with 31 deaths and 26 people lost their lives in Dadu and Shaheed Benazirabad.

Furthermore, it was reported that more than 85,000 houses have been damaged in Kashmore and 2.9mn acres of crops have been completely destroyed. Naushahro Feroze, which reported 36 deaths, Larkana with 31 deaths and 26 people lost their lives in Dadu and Shaheed Benazirabad each. On the other hand, almost 85,000 livestock were lost in Kashmore and 8,000 livestock in Khairpur.

Pregnant women such as Muridaan Bibi or new mothers are in stress as to how they will keep their children safe, moreover with little to no food and shelter, the children are at high risk of being exposed to infections and other fatal diseases.

We hope that they are safe and sound and that all of our fellow brothers and sisters also find shelter.