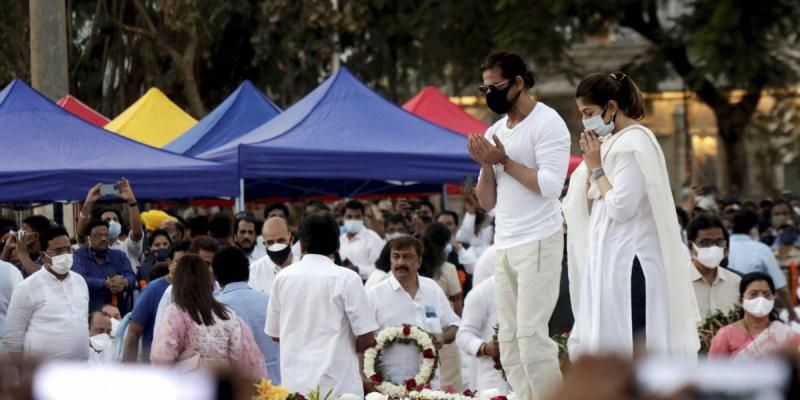 On the 6th of February, Legendary singer Lata Mangeshkar passed away. Shah Rukh Khan attended the funeral with his manager Pooja Dadlani. He was accused by BJP leader in his tweets of spitting on Lata Mangeshkar’s body.

India’s nightingale was hospitalized after she caught COVID-19, and after a long battle, departed from this mortal world.  As reported, she was given a state funeral, and her last rites were performed in Mumbai’s Shivaji Park, where she was cremated among Bollywood stars politicians, the chanting of Vedic hymns, and a special gun salute.

Indian Prime Minister Narendra Modi, Cricketer Sachin Tendulkar, and many other celebrities were present at the last rites to pay their respects.

Shah Rukh Khan stepped on the platform with his manager Pooja Dadlani on which Mangeshkar’s pyre was placed. He was photographed while he was laying a floral wreath on the star. He then aimed his palms towards the sky to make a dua while his manager held both his palms against each other and said prayers.

After SRK finished his prayer, he slid his mask down to blow air on Mangeshkar’s dead body, which Muslims often do after prayer.

What was Shahrukh Khan doing when he removed mask?? #LataMangeshkar pic.twitter.com/pYz4nkClAj

The anti-Muslim hate comments were all over social media following the clips of Shah Rukh Khan that went viral. While some posted hate comments for the star, others tried to clear how Muslims globally blow air after making a prayer.

Indians in comments section are saying shahrukh khan removed his mask and spitted on Lata Mangeshkar. Ye log aqal se paidal hain, O jahilon!! He recited a dua and blew on her for blessings and to give her respect. Idiots!! https://t.co/vfauf7qyaC

Idiots talk about spitting, anyone notice how he dint turn his back completely while getting off. Respectful https://t.co/aNy3ifjb13

Can any person having Islamic knowledge explain this ??? https://t.co/UrrVo5B5Bl

It was also reported that an RRS linked TV channel Sudharshan News was also one of the media outlets that led the propaganda. However, people quickly cleared out the matter on all social mediums.

On Sunday, the news of Shah Rukh Khan’s son Aryan Khan taken into the custody of India’s Narcotics Control Bureau (NCB) was making rounds on social media. SRK’s son was allegedly caught in possession of banned drugs while onboard a cruise ship. Additionally, the authorities also reported substance abuse. Since then, the media has been dragging Aryan’s parents, Shah Rukh Khan and Ghauri Khan, in the headlines.