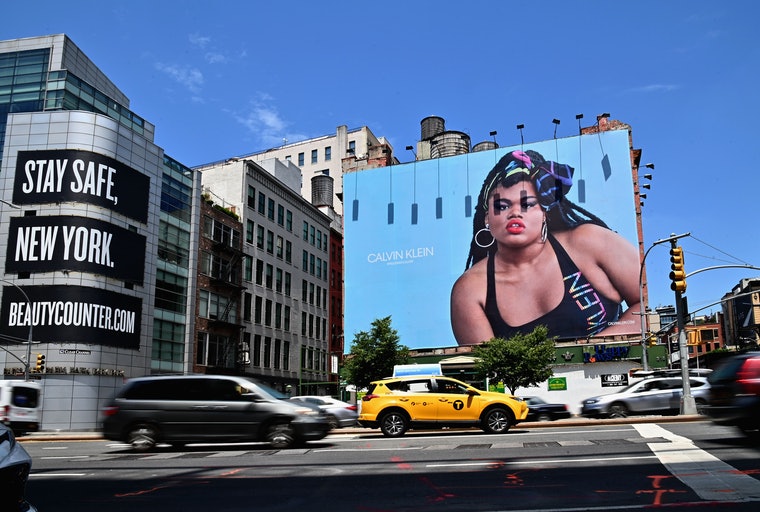 Jari Jones is a Black transgender model, actor, activist to front a Calvin Klein campaign and cover the iconic Manhattan billboard, or any fashion billboard yet. She popped a bottle of champagne and celebrated herself and the historic shift in the brand’s beauty standards.

“It has been such an honor and pleasure to sit in my most authentic self and present imagery of a body that far to often has been demonized, harassed, made to feel ugly and unworthy and even killed” she expressed on Instagram while sharing the iconic image of herself infront of her massive billboard.

There are moments that I heard about, that help you forget when the world told you “Never” !!! . . There are these moments I heard about about that help you heal when the society has tried to beat you down , over and over again. . . There are these very real moments that I heard about that help you feel affirmed even when you don’t see yourself. . . I’ve been searching my whole life for those moments, I got tired of looking for those moments. . . So I decided to create them. Not for me but for the next dreamer, outcast, queer, trans, disabled, fat, beautiful black, piece of starlight waiting for their moment to shine. . . It has been such an honor and pleasure to sit in my most authentic self and present imagery of a body that far to often has been demonized, harassed , made to feel ugly and unworthy and even killed. . . I present this image ,myself and all that my body stands for to my community and chosen family, in hope that they see themselves more clearly than ever and further realize that they are worthy of celebration , of compassion , of love and gratitude. . . – Thank you to @ryanmcginleystudios and the @calvinklein family for a collaboration that will hopefully be a symbol of hope and love during these moments. BLACK TRANS LIVES MATTER!! . . . . #calvinklein #blacklivesmatter #blacktranslivesmatter #transisbeautiful #queer #celebratemysize #actress #honormycurves #pride🌈 #bodydiversity #soho #effyourbeautystandards #curvygirl #curvemodel #influencer #billboard #plussize #plusmodel #influencer #plussizemodel #bodypositive #swimwear #campaign #newyork #melanin #model #ad #sponsored

With the #BlackLivesMatter movement shaking and transforming world views, it is unbelievable and exhilarating to see a Black trans woman represent one of the biggest fashion brands in the world; in a fight for equality and justice, Jones really knows she is playing a vital part in making history and laying down a legacy for the rest to follow.

“#Pride started for me when I decided to rebel against everything I was wrongly taught about myself.” – Jari Jones . . So excited to share with my community and the world the Calvin Klein Pride Campaign 2020 shot by the incomparable @ryanmcginleystudios , in support of @outrightintl !! Donation Link in IG Story !!! #proudinmycalvins @calvinklein . . . . #calvinklein #blacktranslivesmatter #transisbeautiful #queer #celebratemysize #actress #honormycurves #pride🌈 #bodydiversity #effyourbeautystandards #curvygirl #curvemodel #influencer #visiblyplussize #plussize #plusmodel #influencer #plussizemodel #bodypositive #swimwear #campaign #newyork #melanin #model #ad #sponsored

While speaking to Bustle.com Jones said;

“In that moment, so many flashes of history went through my brain. The fact that somebody like me — a trans woman, a Black woman, a plus-sized woman — is being celebrated at such a high caliber, it brings me back to the people who fought for me to get there. So often, when these accomplishments are made, people are like, ‘You did this all by yourself.’ No, I’m the result of a whole bunch of communities that have made it possible for me to continue the lineage of activism and representation.”

One of the nine LGBTQ+ faces being celebrated for their individuality in Calvin Klein’s 2020 Pride Campaign, Jari portrays the campaign theme of authenticity and unapologetic beauty. Being a transqueer icon, the multi- talented star has built her career all by herself: an activist, actor, model, and filmmaker, she became the first Black Trans woman who produced a film that competed in the Cannes Film Festival, reports CNN.

The other eight models in the Calvin Klein’s 2020 Pride campaign #PROUDINMYCALVINS include a trans genderqueer YouTube personality Chella Man, Brazilian drag queen Pabllo Vittar, 13 Reasons Why” gay actor Tommy Dorfman amongst others. The photoshoot and videos were taken by the American photographer Ryan McGinley. 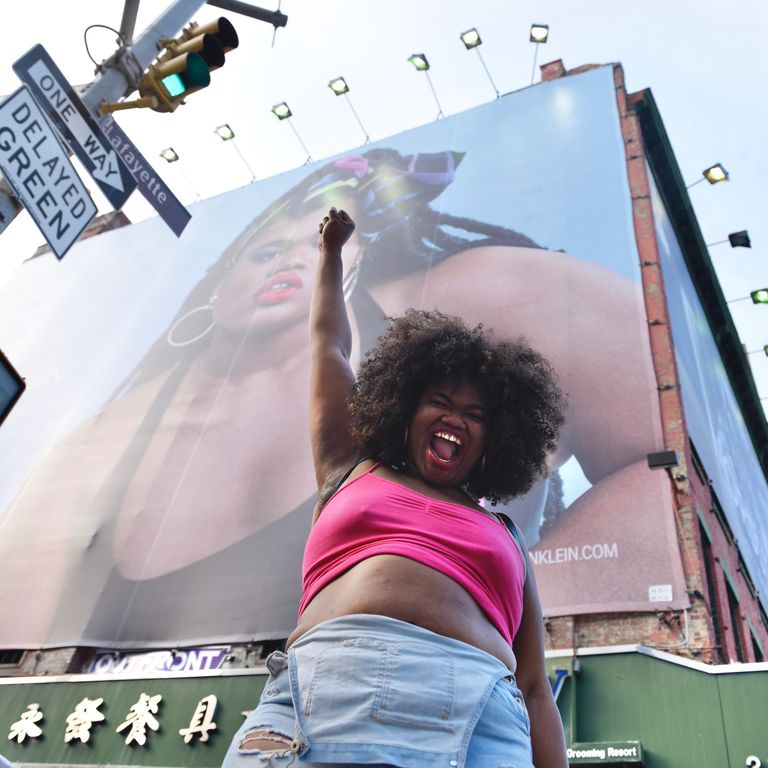 A campaign theme around the message of finding “connection through community,” Calvin Klein has outdone itself by portraying a compelling and relevant message beautifully; specially when times are vulnerable for the Black community.

This campaign has made Jones a pioneer in the community of Black trans gender people creating a historic shift for a brand that previously leaned toward a narrow beauty standard, like many others.

“I see it as a possibility model,” Jones explains while giving an interview to Harpers Bazaar;

“I almost think the billboard is like looking into the future. We’re in the streets, we’re fighting, we’re protesting, we’re demanding, and it’s like, ‘What is the next move? What are we working toward?’ I feel like you’re fighting so hard and sometimes people aren’t listening, so you need that light, that beacon of hope, or that imagery of the world we want. Through fashion and media, we get to see that.”

Moreover, for Jones it’s even more personal because her grandfather also made history in the world of modeling. Her grandfather became the first black model, back in the 1970s, when black models weren’t being hired; she is building up on that legacy now and feels so proud!