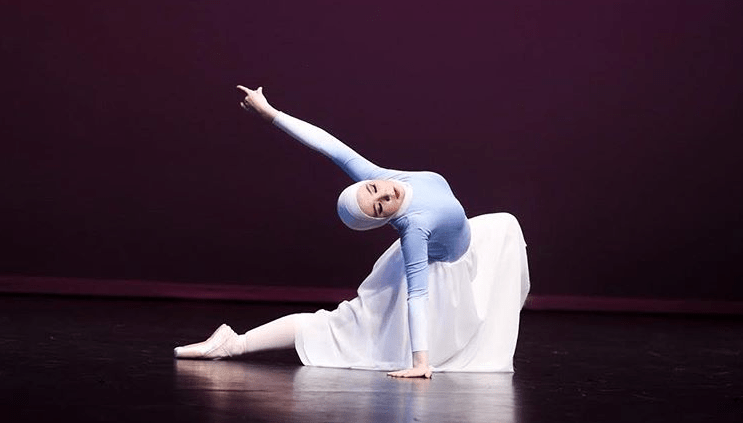 Meet the 18- year old Hijabi, Russian- Australian ballerina dancer, Stephanie Kurlow, changing the game of ballet, one step at a time. The aspiring professional dancer’s technique is clean and her joy while performing is infectious, but what makes her different than the other girls is her unwavering determination to follow her dreams while being devoted to her Islamic faith.

Her bold and daring step to beautiful adorn the Islamic headscarf and modest attire while performing ballet has turned heads worldwide.

She converted to Islam when her family embraced the religion in 2010; she was merely 9 years old back then. However, the talented and inspirational dancer has been learning ballet since the age of 2!

A beautiful day begins with a beautiful mindset 🦋

Changing the stereotypes attached to this profession, the artist is only a teenager, but her self-confidence and faith are stronger than steel. While talking to Pointe Magazine back in 2019 the artist revealed that it’s her faith and her humble and modest attire during ballet that makes her appreciate this dance form. She realized how it’s all connected and is an expression of her spirituality. “I love and thrive through the process of ballet”, she revealed.

happy international dance day!! ♥ here’s some rehearsal footage from before @ahaawards so much to work on but what a joy to have had the chance to perform on the opera house stage in wellington ✨ the variation is from the pas de trois in swan lake wearing my shiny new @gaynorminden pointe shoes! #internationaldanceday #gaynorminden #gaynorgirls

Stephanie hit a rough patch when she and her family embraced Islam. She was rejected from every ballet school for wearing a hijab while performing and training and she almost gave up. It was during this time that her mother decided to open a ballet academy herself for her daughter. Her mother saw how discouraged her daughter felt.

Even at such a young age, she was determined to wear the headscarf. While talking to Mashable Australia Kurlow said:

it is a gift to dance. it is a gift to live. we don’t appreciate life any where near enough, even when it’s gone. as an artist I’ve found that I live most honestly and freely through my art. but it is important to remember that we are living beings that need to live and breathe through absolutely everything that we come across. it is something rare and special to find something in life that you are so completely passionate about that you’re able to lose yourself in it. but don’t become lost without it. because you are so much more. you are here

Once determined to not give up, Kurlow made her own crowdfunding page for tuition funds to fulfill her dream. In 2016, at 14 years of age, her luck turned when she was noticed by the Swedish sports brand, Björn Borg, that offered her a scholarship. They were genuinely inspired by her story and wanted the world to know.

powerful. ambitious. magical. risk taker. let’s redefine what GIRL means on our terms ❥ what does being a girl mean to you? #LoveTheProgress #InMyConverse

While talking to Mashable Australia about her scholarship, she revealed;

“I plan on bringing the world together by becoming the very first hijab-wearing ballerina so that I can inspire so many other people to believe in themselves and pursue their dreams”.

She started wearing the headscarf at the age of 11 Stephane told Haute Hijab.

“Everything made sense for me in Islam. I like to be modest and I like to keep my dignity. I like to know the purpose of my life. I like to live a healthy lifestyle and avoid harmful things.”

Stephanie wants to build her own all-inclusive ballet studio some day! Once talking to Emirates Woman, she revealed:

“Once I am a professional, I would also like to open my own ballet company and performing arts school that caters towards people of different religions, races or backgrounds. We have come so far in diversity and inclusion, but we still have a long way to go”

She wants people to recognize her as a talented ballet dancer and not just for her hijab.