Sunday, June 26 2022
Top Posts
3 DIY Hotpot Recipes You Can Make at...
5 Tips to Keep Your Hair Sweat-Free During...
Fawad Khan to Make Debut in Ms Marvel...
“Women Can Accomplish Anything They Set Their Mind...
TikTok Releases First Album of Viral Hits
Mehwish Hayat Makes Her Debut as a Djinn...
‘Girls are No Less Than Boys’ Says Pakistani...
Punjab Government to Provide Scooties to All Female...
Is Akshay Kumar’s Upcoming Film ‘Raksha Bandhan’ a...
On This World Music Day, Spotify Celebrates K-Pop...
FeaturedNewsSuccess StoriesTrailblazer

A woman in Pakistan is breaking gender stereotypes by serving as the country’s first female fighter. A small-town girl, Shazia Parveen, who hails from Karampur, Punjab is a 30-year-old female fighter of the Rescue Unit 1122 located in Vehari Multan. She is the first ever woman firefighter of Pakistan, and perhaps first also in Asia, reports BBC News.

Shazia is a daughter of a retired army officer residing in Karampur with eight siblings. The brave girl has been fighting flames alongside men who are a lot older and stronger and has been saving lives since 2010.

In a conservative society like ours, where millions of women still struggle for rudimentary education and healthcare rights, this is an unusual and commendable achievement.

While speaking to BBC news during an interview Parveen said;

Ever since childhood I wanted to do something big and different. I had always wanted to achieve big and prove that females can too, work alongside men, regardless of how challenging the task or profession maybe”.

The road to accomplishing her vision was not an easy one! She had to undergo extensive and rigorous training, for over 7 months under Punjab Emergency Services, Lahore. In her grueling training sessions, she had to practice rescuing 300 ft above and below the ground. She had to swim, jump and climb roofs with ropes. As Express Tribune reports, some sessions were so hard that many of her male co-trainers left the program. 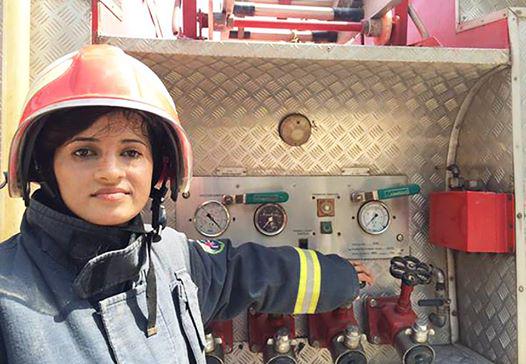 Shazia, however, with her consistent effort and determination, persevered, and went on and became the first ever professional female firefighter.

“Amongst the 600 people there, I was the only woman who completed the training,” she revealed while talking to Express Tribune.

She even went on to inspire some of her male colleagues to keep going!  Despite being a challenging and dangerous profession, Parveen had always dreamt of this kind of job.

Belonging to a small-town in Punjab, Shazia had a progressive mindset and the thought of working with male colleagues did not intimidate her. While speaking to Express Tribune she revealed;

“Some women avoid and hesitate to work with men. That is where I differ with them and think that we, women, can work shoulder-to-shoulder with men.”

When the Women’s Department at Rescue 1122 opened, she leaped at the opportunity immediately.

But what kept her going?

“I was told during the training that I would become the first lady firefighter of Asia, which made me extremely jubilant and it was like my dream had come true,” Perveen revealed.

She helps firefighters where women are trapped and has saved several lives and property in her decade of working as a firefighter.

“At the outset, people would laugh at me when they saw me working with male workers. But afterwards, when I saved their precious properties during fires, they started admiring me,” she narrates.

“It is believed that women are only able to start fires, whereas I have disproved this old adage and now I extinguish fires,” Parveen went on to say.

Shazia’s passion and hardwork has inspired several women from different fields, proving that women are capable of acquiring any goal. We wish her all the best for her future endeavors and admire her for her bravery. Way to go!

What do you think about this article? Let us know in the comments below.