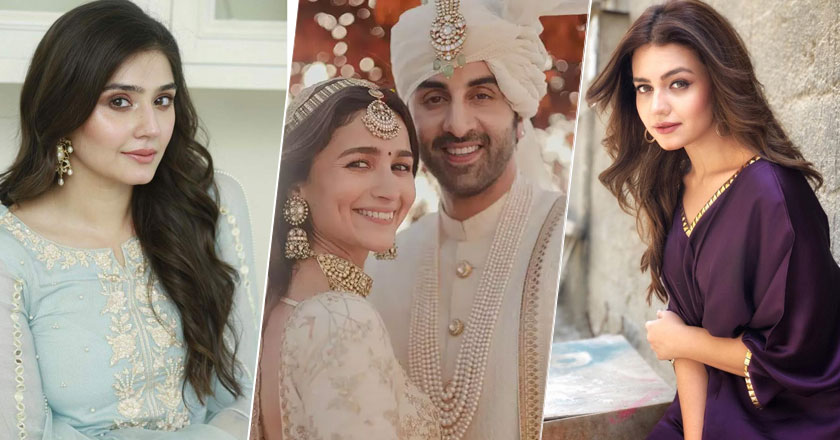 Shortly after Bollywood stars Alia Bhatt and Ranbir Kapoor tied the knot, the couple stole the limelight, as fans were astonished to hear that they were ready to move to the next step of their relationship so fast.

Following their marriage, Alia took it to Instagram to announce that Kapoor Jr was on the way. She wrote “our baby ….. coming soon” after which a heap of comments started to pour in.

But, this also provoked trolls to take an opportunity to take a dig at the newly married couple. It took mere minutes after the post went online for snarky and nasty remarks to pop up. However, Alia was extremely unhappy when India Today wrote that she will be taking a break from her shoots.

Moreover, the publication added that the actress planned the pregnancy so that it does not come in the way of commitments and that she will be wrapping up her shoots for ‘Heart of Stone’ and ‘Rocky and Rani Ki Prem Kahani’ before July.

Furious over this fake news, Alia took it to Instagram to respond by saying that ‘nothing has been delayed, no one needs to PICK anyone up, I am a woman, not a parcel, I do not need REST at all but good to know you’ll have a doctor’s certification as well. 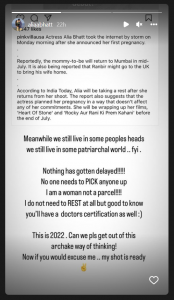 After this news went viral, Pakistani actress Zara Noor Abbas also took a stand in favour of the Indian actress. She wrote ‘And I thought only Pakistan thinks like this especially when brands wanted to drop me off when they got to know I was expecting – becoming pregnant and being an actress makes the society feel you are not GOOD for work anymore. Well, guess what, WOMEN are good enough for everything and anything and it’s time the DICTATORS realise so. And WE DON’T HAVE TO PROVE OUR MOTHERHOOD AND CRAFT to any patriarchy.’ 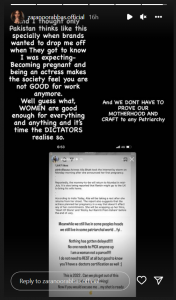 Durefishan Saleem also took it to social media to add her two cents. She writes ‘we can get married/make babies and still be kick-ass fab. Marriage is a part of life, not a halt. Stop telling WOMEN that their career goals don’t align with that.’ 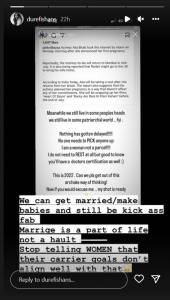