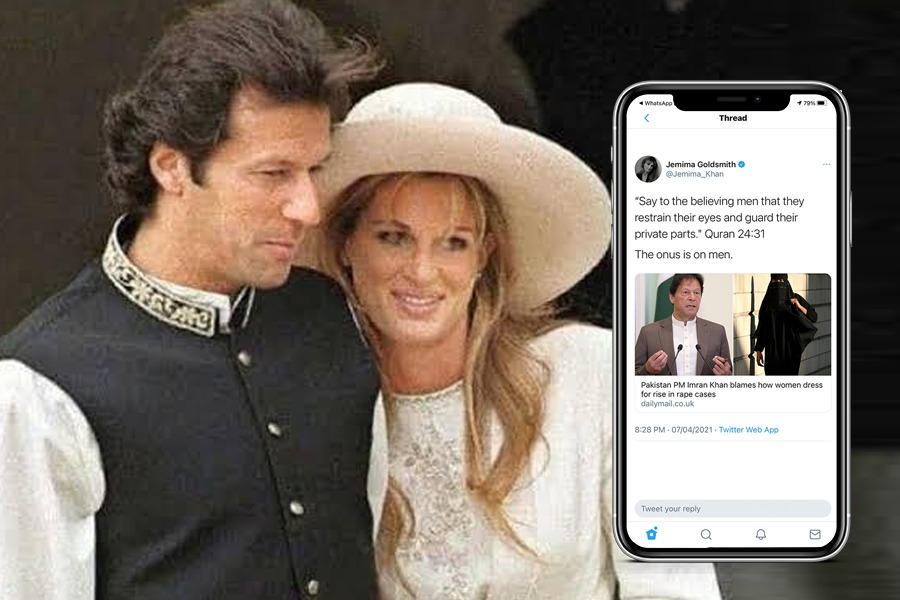 Prime Minister Imran Khan’s comments termed as “dangerous” and “insensitive” against sexual violence against women have sparked outrage internationally! UK’s MailOnline ran the news piece with the headline,  Pakistan PM Imran Khan blames how women dress for rising in rape cases and says ‘not everyone has the willpower to avoid it to which the premier’s ex-wife, Jemima tweeted:

“Say to the believing men that they restrain their eyes and guard their private parts.” Quran 24:31 The onus is on men.

She then tweeted again and said, I’m hoping this is a misquote/mistranslation. She recalled that the man who was once her husband use to say, “Put a veil on the man’s eyes, not on the woman.”

I'm hoping this is a misquote/ mistranslation. The Imran I knew used to say, "Put a veil on the man's eyes not on the woman." https://t.co/NekU0QklnL

She then recalled her time in Saudi Arabia where an older woman in an abaya & niqab had to show her face to young men harassing her. That was the only way she got rid of them.

I remember years ago being in Saudi Arabia and an elderly woman in an abaya & niqab was lamenting the fact that when she went out she was followed & harassed by young men. The only way to get rid of them was to take her face covering OFF.
The problem is not how women dress!

Earlier on, during a live interactive session, a caller specifically asked what measures Imran Khan’s government is taking to eradicate heinous crimes such as rape and sexual violence from our society.

Khan blamed obscenity as the root cause of rape cases and sexual violence in Pakistan. He said: “Aaj jis maashray mein aap fahashi barhatay jayen, toh koi tou us ka asar hoga na. (In any society where vulgarity is prevalent, there are consequences).

Since then, Khan has been called out for his hypocrisy and insensitive comments on many platforms by many people.  Have something to add? Let us know in the comment section below.

Imran Abbas Says Meera is Perfectly Fine, News of Her Being Unwell & Admitted to a Hospital is Fake