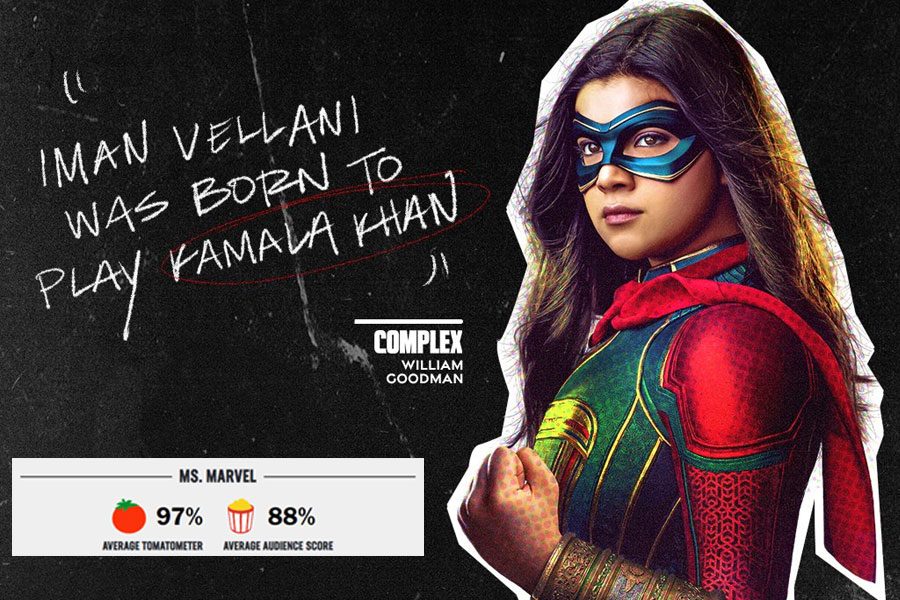 She came, she saw, she conquered! Kamala Khan aka Ms Marvel has managed to steal the hearts of fans all over the world with her energy, and of course, her representation of being a Pakistani superhero is the talk of the town.

Iman Vellani plays Marvel Comics’ Kamala Khan, a 16-year-old high school student and superhero fangirl who discovers she has powers like her idol – Captain Marvel. In real-life, Vellani is also a huge superhero fan, who made her own Ms. Marvel costume when she was 15, showing that if you want to reach for the stars, that’s exactly what you can accomplish.

The pilot episode is out and social media is buzzing like a bee about their thoughts. Moreover, calling it a ‘fresh edition’ to the MCU, Rotten Tomatoes has rated the series a whopping 97%, placing it on top of titles like Black Panther and Marvel’s Agents of S.H.E.I.L.D.

Furthermore, Malala Yousufzai also applauded Iman Vellani (Ms marvel) for a phenomenal job and thanked her for presenting the accurate lives of an immigrant family from Pakistan. Malala penned down a thoughtful note summarizing it is not every day you see a character on TV that you can relate to, who eats the same food or does the same dressing like you. Even though we didn’t see any Fawad Khan as we all wanted to we did manage to get an eyesome of Bollywood’s Farhan Akhtar.

“What a joy to see Ms. Marvel reflect the lives of a Pakistani immigrant family and reveal a young superhero whose powers connect to her heritage. Thank you, Marvel and Disney+, and most importantly, Ms. Marvel,” she wrote.

Here’s what social media has to say about Ms Marvel Episode 1:

I'm so unbelievably proud of this young woman. Welcome to the MCU #MsMarvel! People are going to be watching you for a long, long time. https://t.co/KxXN4NESwv

as a muslim marvel fan, the first episode of ms marvel made my day🥲 #MsMarvel pic.twitter.com/vUhrZJZqIr

#MsMarvel is so so so good. I love it. Fun and sweet and funny. Wish they dropped two episodes.

I was worried about #MsMarvel being very teen — and it is for sure — but they also did a commendable job of making it accessible to old fogies like me. I had fun watching that first episode for sure, much more than I thought I would. MCU keeps hitting homers. Kudos.

Have you watched Ms Marvel yet?

Share your thoughts about what you think about the episode.