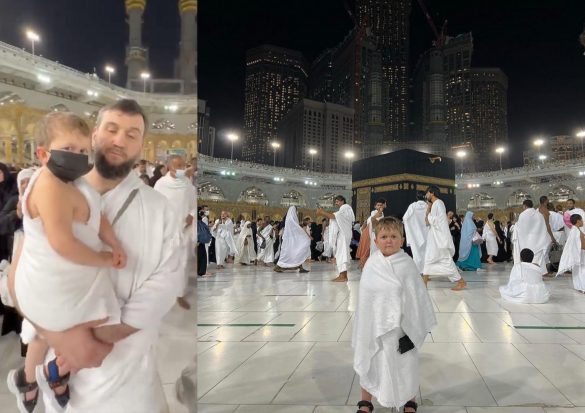 Hasbulla Magomedov, a Russian 19-year-old Russian star, has performed his first Umrah during the holy month of Ramadan.

The sensation shared glimpses of him performing Umrah at the Holy City on the micro-blogging site Twitter in the form of a photo and a clip. In the photo shared by Magomedov, he is in a traditional ihram at the Grand Mosque in Makkah. He performed Umrah in an acquaintance’s arms with his face covered with a face mask worn due to the COVID-19 pandemic.

Magomedov became famous in 2020 on Instagram after he went viral. He has one sister and was born with a genetic disease, most likely dwarfism.  He became an instant favourite of the Mixed Martial Arts (MMA) community. His claim to fame was announcing a fight against Abdu Rozik, which is yet to happen.

Twitter responded pleasantly to Magomedov’s photos from his pilgrimage

“My Man,” tweeted a user

“My favourite little man!” wrote another.

“King,” wrote someone else.

When asked what his first order of business was once he came into power, he responded, “I’ll slow down the speed limit within the city, but increase it on the highway,” adding, “All the speed cameras are coming down.”

The Kingdom of Saudi Arabia has eased its rules for women to travel for Umrah in the country without a mahram. Earlier on, women who didn’t have husbands or whose husbands couldn’t travel or had passed away were not allowed to travel for Hajj and Umrah by the authorities. As the Kingdom makes great changes and eases many restrictions in the country, another development has come forth that women can now travel to Saudi Arabia without an escort/male guardian.

Dua Zehra, Missing Teenager Girl States that She Left Karachi to Tie the Knot in Lahore