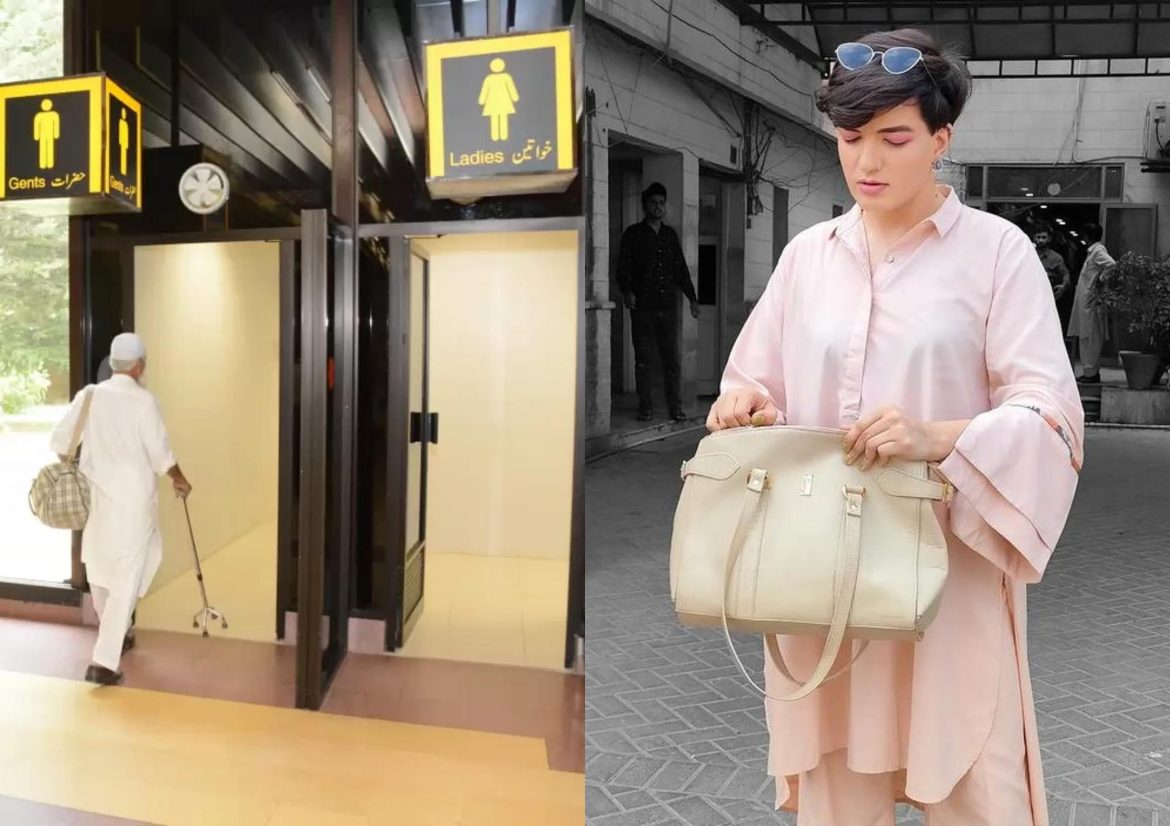 If you have traveled by air in Pakistan, you must have observed that the airports facilitate passengers at several checkpoints before getting on the plane; from checking in to screening to boarding, people stand in long queues eagerly waiting to get on the flight – one line dedicated to men while another for women.

Women enter a box-like room covered with a curtain at the screening checkpoint while men are screened out in the open. You can find restrooms on every floor with characters placed outside on the doors, and the only way to differentiate which one is for men or women is a frock outfit worn by one of them, indicating this one is for women. Nowhere in this entire experience will come across a line, a desk, a restroom, or even a screening point for transgender people – a part of our community that has been neglected for decades in our country.

In recent years, transgender people have finally started receiving due diligence from the state: ID cards are being issued, schemes are initiated, and similar efforts are made to uplift the community. However, public places in Pakistan are still not inclusive, such as the airports.

Transgender person Mehrub Moiz Awan took to Twitter to reveal what it was like for her to travel by air in Pakistan in a series of tweets.  Awan narrated how guards at the screening had to question whether she was a female or male – obviously due to the lack of facilities present at airports for transpersons – while he was travelling from KHI to Khotki.

I had to be in Lahore and then back to Karachi over this weekend. While flying out from KHI, I went in khotki (dressed in male clothes). As my transition is pretty obvious now, the guard at screening asks me "ap male hain ya female". "Transgender" I say…

She pointed at that while travelling from Lahore, the guards took a longer time to let her in.

Today, had to fly out of Lahore and I was in firka (dressed in feminine attire). Now LHE airport is rude, transphobic, weird, all of that but let's give it a try I think and here we go. The guard at the gate takes 3x longer to let me in. At screening, a female guard steps ahead..

At the Lahore airport, women chose to do the screening this time around, followed by the ticket officer taking long again.

Now I need my boarding pass and the PIA ticket officer takes 3x as long again – when I travel in khotki, it's usually much faster. They think of me as some high flying artist so everything is quick but today it's suspiciously longer, more inquisitive, etc.

Awan’s name was read aloud by one of the security guards to his staff. She said, ‘clearly, this was the highlight of their day’. Awan pointed out how her name’s privacy wasn’t as important as the staff’s amusement.

So one airport, one team, one shift, and I get to go through both the women's and men's security 🙂 where this screams ASF's absolute lack of training despite the Fed Act on Trans 2018, it also shows how we operate on an interesting paradigm of thirdness

When it came to restrooms, Awan chose to not use the restrooms for either men or women, so people don’t create a scene.

PS: super proud of myself for braving through one of the biggest transition anxieties I've had. I travel a lot for work and a big big limitation to my transitioning was travel – I've stalled it since 2015 because of the amount of travel involved. So these 3 hours were major.

Her journey reveals how transpeople travelling by air is still a new concept in Pakistan, and this may be one of the many issues that revolve around their lives today.

Pakistani transgender woman Saro Imran from Multan has completed her M.Phil degree in Commerce. This makes her the third trans person in Pakistan with 18 years of education and 1st in her region. Saro studied at the Bahauddin Zakaria University in her home city, Multan. The topic for her research paper for her M.Phil degree was ‘How to start a transgender business in Pakistan, business development objectives and challenges.’