On Sunday, the Pakistan Electronic Media Regulatory Authority (Pemra) prohibited all satellite TV channels from airing the CCTV footage of Noor Mukadam’s last moments after it was leaked and shown on air.  The footage that is now going viral on social media showed Noor’s unsuccessful attempt to escape Zahir’s home in Islamabad, where she was later murdered.

As per a notification issued by Pemra, telecast of leaked CCTV footage of Noor and Zahir has been prohibited by the authority under Section 27 of the Pemra Ordinance, 2002. 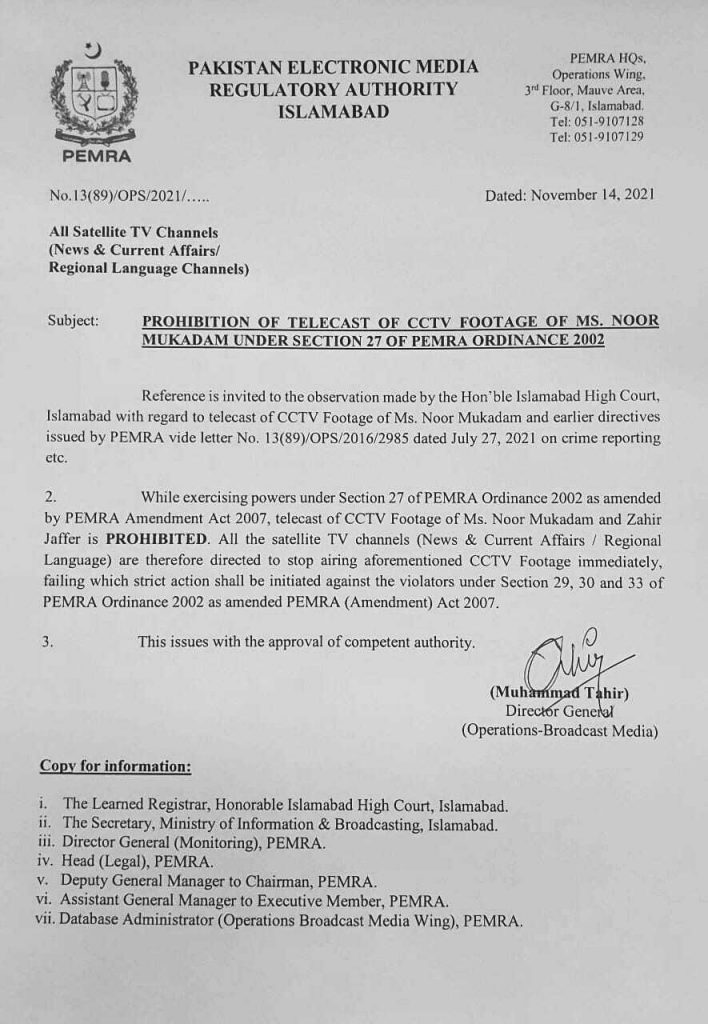 The CCTV footage was leaked after it was unsealed and provided to the defence.  In the footage, Noor Mukadam can be seen running towards the gate, trying to escape. She ran towards the main gate of the house barefoot. However, the gatekeeper prevented her from escaping and informed Zahir to keep her imprisoned.

We also see Noor jumping off from the terrace or balcony to save herself in the same footage.  After landing on the ground, Noor was seen running towards the main door but failed to escape. Noor was followed by Zahir and was dragged back inside the house while the gatekeeper witnessed everything happening but didn’t help the girl. He then took Noor inside and locked the door. Within three hours, she was murdered.

A knife, a pistol, and an iron mace from the suspect’s possession have been recovered, the public prosecutor, Sajid Cheema, told the court.

“Staff and servants are equally responsible for her murder.”

Extremely dreadful and disturbing video broke my heart.
No one helped her
ZahirJaffar Killed #NoorMukadam but all the staff and servants are equally responsible for her murder.

anybody who brings the leaked CCTV footage of noor to my timeline is getting a no questions asked block. do not share something meant to be private for likes and RTs under the guise of bringing her justice.

“Journalists must not share,, and channels must not air the visuals. This is very disturbing and traumatic for us,, so just imagine the feeling of her family!”

It is really painful to see the cctv footage of helpless #NoorMukadam in the clutches of a beast #ZahirJaffer.. Journalists must not share and channels must not air the visuals, this is very disturbing and traumatic for us so just imagine the feelings of her family! pic.twitter.com/hOH18cuieq

“No empathy, no concern for her family or loved ones. Absolutely sickening”

Every major news channel is running the CCTV footage of Noor’s last moments.
Nothing matters more than breaking the news first and pasting your logos all over the footage. Koi peechay na reh jaye bus. No empathy, no concern for her family or loved ones. Absolutely sickening.

Absolutely shocked & shattered. Its only been a day since the CCTV footage was given to the defense legal team.The Judge told them that it shouldn't be leaked at all. Now it's out there. No regard of what this would be like for Noor's loved ones. Havent they been through enough.

Whoever released Noor’s CCTV footage, I hope you rot in hell. Deepest pits of hell.

These news channels are the worst thing that happened to society, no conscience whatsoever. ary & geo both showed cctv footage of noor mukadam with zero regards to how triggering this can be specially for her family & friends.

A user wrote, “Can’t even imagine what the family of Noor must be going through. As if losing their beloved daughter wasn’t enough”.

Shame on everyone sharing #noormukaddam’s cctv footage on tv channels and Twitter or any other platform. This society is full of sick and apathetic individuals. Can’t even imagine what the family of Noor must be going through. As if losing their beloved daughter wasn’t enough.

National TV channels showing CCTV footage of late Noor Muqaddam & Zahir Jaffer should be ashamed of being disrespectful to not only her but insensitive to her family. Shame on you. Doesn’t PEMRA or PTA have some rules for this or this doesn’t tantamount to “objectionable”?

The investigation for Noor Mukadam’s brutal murder is taking place with officials already investigating alarming findings.
As for now, calls of Zahir’s mother, Asmat Jaffer, are being looked into. According to many people accustomed to the incident and investigations, the authorities are taking a keen interest in infrequent communications between Zahir and his mother and the head of a private Rawalpindi-based security firm on the day of the murder.