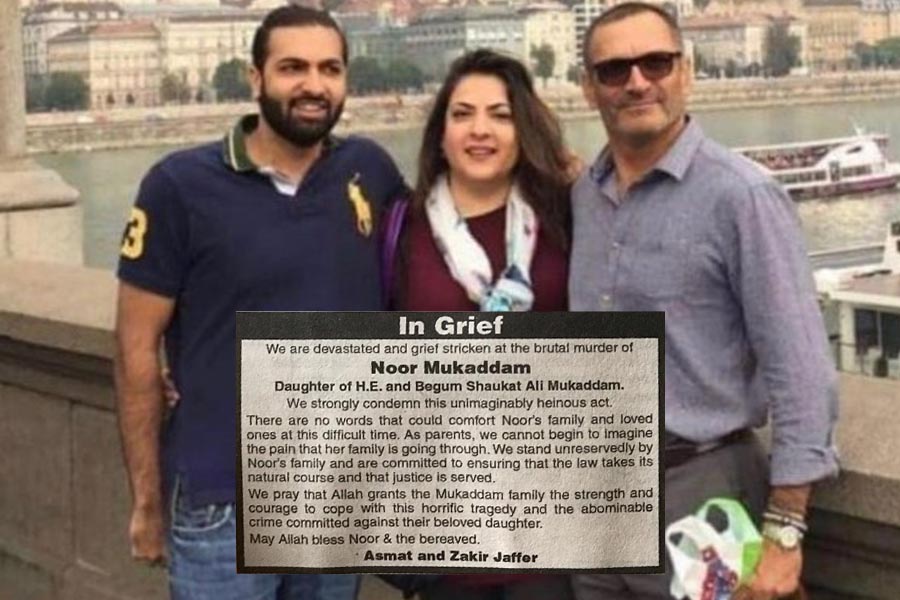 The parents of Zahir Jaffer, Asmat and Zakir Jaffer have issued a public notice to show their support to the bereaved family on the barbaric murder of Noor Mukadam by their son ‘Zahir Jaffer’. The notice appeared in a leading newspaper today. 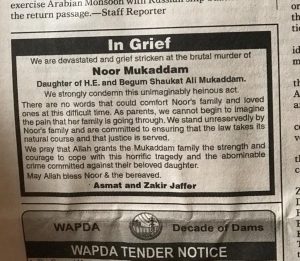 The notice states that they are “devastated and grief-stricken at the brutal murder of Noor Mukaddam” however there is no mention of the name of their son in this statement. They mention that

‘as parents we cannot begin to imagine the pain that her family is going through ” and have conveyed their condolences to the bereaved family and prayed for the departed soul.

While the investigation is under process, many shocking details have been found about the abominable incident that took life of 27 year old Noor Mukadam. Zahir and Noor were in regular contact since Zahir flew back from United States back in December 2019. Since then, he never went back and stayed in Pakistan. During the period of last three months, Zahir tried to reach Noor 68 times while it was intercepted that Noor also tried to reach him 47 times.

According to reports by GEO News, the killer was in constant touch with his family members during 2 pm and 7 pm on July 20th which is when the murder took place.

Before the incident took place on 20th July, Noor and Zahir connected on 18th July after a break of few weeks. Soon after they connected over phone, Noor left her house to meet Zahir. Some reports mentioned that she tried to contact her driver and asked her to arrange seven lacs from anywhere possible, and deliver it to Zahir’s house. The driver could only manage three lacs and handed over the money to Zahir’s servant. ( not yet verified)

Noor’s family was quite concerned by her absence, and they tried to contact her numerous times between 19 and 20 July, to which she could only respond that she is travelling to Lahore on. This was the last message by Noor to her mother on 20th July at 10:56 am after which Zahir took her phone away and started torturing her. From around 11 am till 7:30 pm, Zahir kept torturing Noor. She even tried to escape but she was brutally beaten and dragged back again in the house. The domestic staff of the house also witnessed the whole process which ended when Zahir finally beheaded her.

Zahir’s family was also in contact with him during this time. The family initially tried to play the US Citizen card but the US embassy kept safe distance from the case and issued a statement “In a foreign country, US citizens are subject to that country’s laws. When Americans are arrested abroad, the Embassy can check on their well-being and provide a list of lawyers, but cannot provide legal advice, participate in court proceedings or effect their release.

Pakistani Female Singers Who Are Ruling The Music Industry