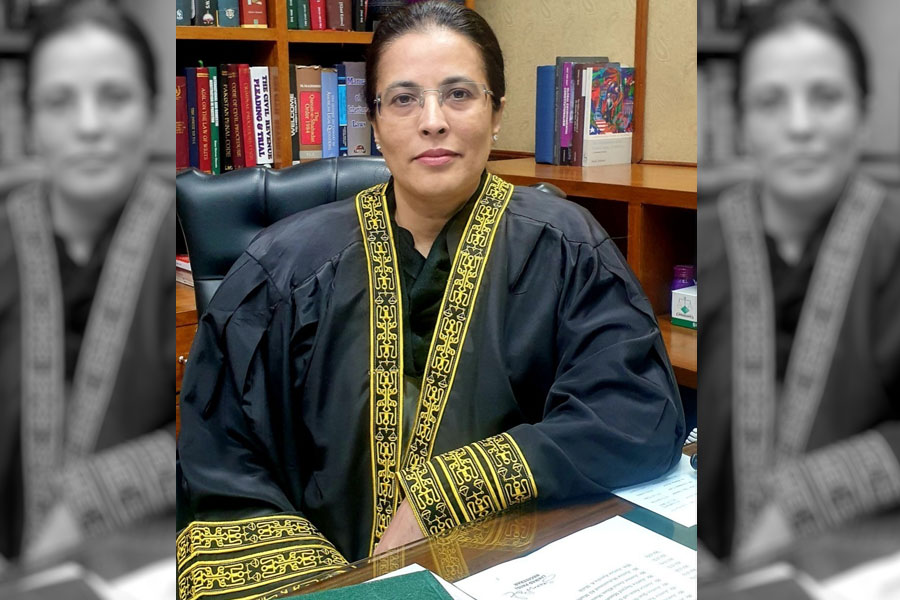 Pakistan’s first female Supreme Court Judge, Justice Ayesha Malik has once again made us proud. She has been featured as one of BBC’s ‘100 Most Influential Women’.

In her profile, BBC highlights that Justice Malik has authored judgements protecting the rights of women, including her “landmark judgement which banned the so-called two-finger test of rape victims” which was performed during the examination of sexual assault cases.

It further reads, “Alongside her role on the Supreme Court, Malik also conducts training for judges around the world and has inaugurated conferences for women judges in Pakistan, encouraging the debate around including the gender perspective in the justice system”.

Justice Ayesha Malik made headlines when she was sworn in January 2022. while talking to the media, former chief justice of Pakistan Gulzar Ahmed stated that “She deserved to be a judge of the Supreme Court,” and that he would not take credit for Justice Ayesha’s elevation as the apex court judge.

It’s wonderful to see this year’s list of 100 Women and to be celebrating its tenth season. The women on this year’s list are all remarkable in what they have achieved and contributed to their communities and society, and I am proud that the BBC continues to do vital work by shining a spotlight on them and sharing their stories around the world through our first-class journalism and storytelling. -BBC Director-General Tim Davie

For the first time this year, the BBC had asked some of the previous 100 Women to nominate women they feel deserve a place on the 2022 list. Pakistan’s own Malala Yousafzai nominated Alice Pataxó, a climate campaigner, journalist and influencer from Brazil.

In the tenth year of 100 Women, it is brilliant to see how the annual season has gone from strength to strength. I remember our launch and the very first intake of 100 Women – little did we know how much the project would grow. I’m delighted to see the women featured on this year’s list. They, like all the women before them, have contributed to our world in incredible ways, and we celebrate this. This is about increasing visibility and giving recognition where it’s due. -Senior Controller of BBC News International Services and Director of BBC World Service Liliane Landor

We’d like to give our hearty congratulations to Justice Ayesha Malik and wish her all the best in future endeavours.