Sunday, June 26 2022
Top Posts
3 DIY Hotpot Recipes You Can Make at...
5 Tips to Keep Your Hair Sweat-Free During...
Fawad Khan to Make Debut in Ms Marvel...
“Women Can Accomplish Anything They Set Their Mind...
TikTok Releases First Album of Viral Hits
Mehwish Hayat Makes Her Debut as a Djinn...
‘Girls are No Less Than Boys’ Says Pakistani...
Punjab Government to Provide Scooties to All Female...
Is Akshay Kumar’s Upcoming Film ‘Raksha Bandhan’ a...
On This World Music Day, Spotify Celebrates K-Pop...
FeaturedNewsTrailblazer 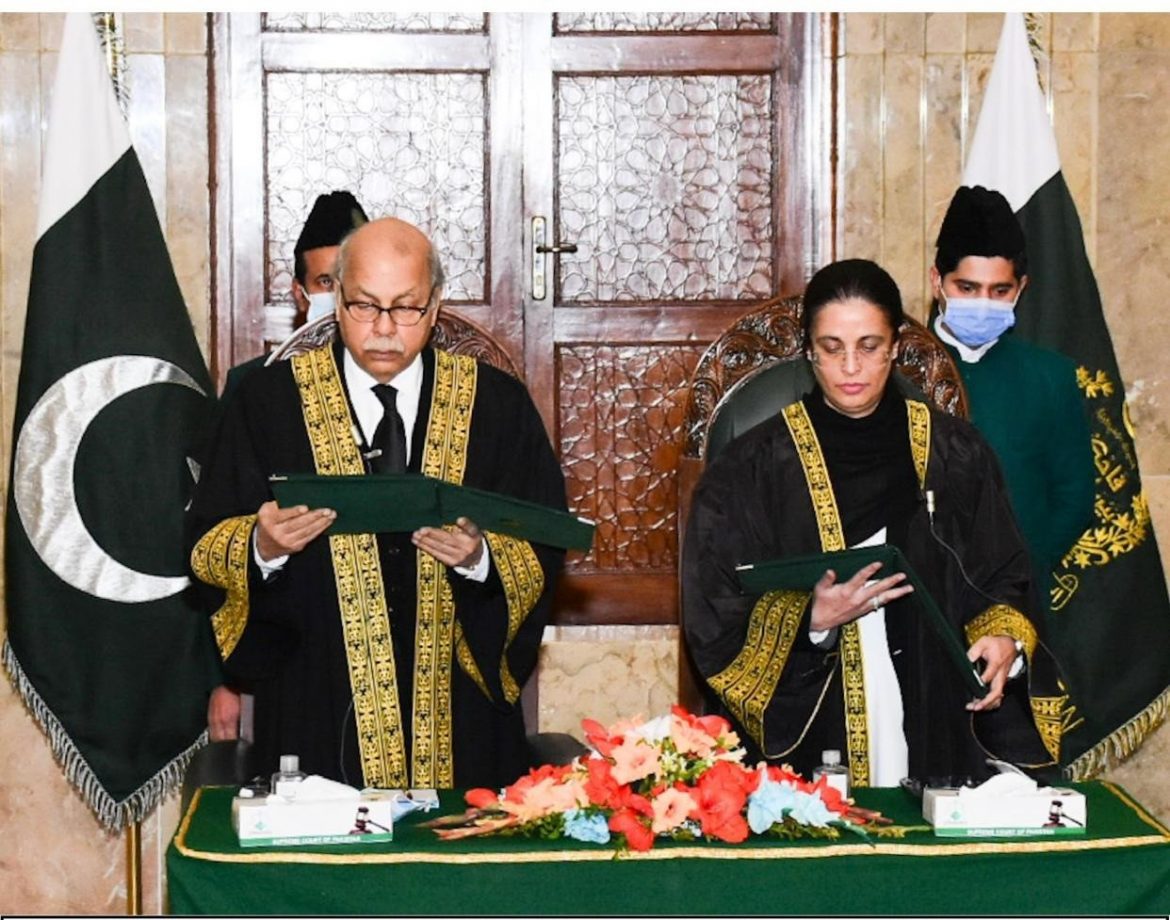 For the first time in the history of Pakistan, a woman, Justice Ayesha Malik has taken an oath as a supreme court judge.

Her nomination was intensely opposed by lawyers who had threatened the state to go on a strike. However, on the other side, it was hailed by lawyers, activists, journalists as a stepping stone to improve representation for women in the country.

She has now become the Supreme Court judge for the next 10 years (till 2031) and will become Chief Justice of Pakistan (CJP) after the retirement of Justice Yahya Afridi in January 2030.

On this auspicious occasion, many congratulated Justice Ayesha on becoming the first female supreme court judge:

Chaudhry Fawad Hussain said in a tweet, “A powerful picture symbolizes the women empowerment in Pakistan”. He added, “I hope she will be an asset to our judicial hierarchy.”

A powerful picture symbolises the women empowerment in Pakistan, I hope she will be an asset to our Judicial hierarchy… Congratulations #JusticeAyeshaMalik a land mark elevation pic.twitter.com/BZplrXquOK

Aliya Hamza Malik tweeted, “Hoping her presence in the highest judiciary would make a positive difference in our justice system and open doors for many more women in SC”.

A historic and empowering day for #Pakistan . Hoping Her presence in the highest judiciary would make a positive difference in our justice system and open doors for many more #women in SC.
Congratulations with best wishes #justiceayeshamalik pic.twitter.com/1tVyu64oV0

Muniba Mazari also tweeted regarding the landmark elevation of Justice Ayesha Malik. She wrote in a tweet, ” What a historic day. Here’s to the strong women. May we know them. May we raise them. May we be them!”.

What a historic day! 💫
Here’s to the strong women. May we know them. May we raise them. May we be them! #JusticeAyeshaMalik pic.twitter.com/3b7H2cN4RX

Journalist Saqib Ul Islam wrote, “History is not was, it is.”

History is not was, it is.
First female judge of the Supreme Court of Pakistan “Justice Ayesha Malik” takes oath of office #AyeshaMalik pic.twitter.com/vQ4OSK1O3Y

A very good and pleasant morning to all. #justiceayeshamalik pic.twitter.com/ZphYlkKfH3

Justice Ayesha Malik takes oath as the first female Supreme Court Judge of Pakistan. Chief Justice Gulzar Ahmed administered the oath. It is a historic day for Pakistan and for the women of this country.#ayeshamalik #justiceayeshamalik pic.twitter.com/TKV8boZDRE

This is really a good news of today. Positive side of Pakistan.Good Luck #JusticeAyeshaMalik, first woman judge in the Supreme Court of Pakistan. pic.twitter.com/xr6oCKa9KD

#JusticeAyeshaMalik takes oath as judge of the SC. She is the first female to be appointed to the SC since the country’s independence. This is a truly historic moment. pic.twitter.com/0Z2R7S1FkL

In March of 2012, she became the judge of the court. Justice Ayesha Malik has been working pro bono to counsel for NGOs that work for microfinance, poverty alleviation, and skills training programs in Pakistan. She also served as a reporter for Pakistan for the Oxford Reports, a publication of the Oxford University Press. on the International Law in the Domestic Courts.

Justice Ayesha completed her school in Paris and New York and moved to Karachi to do her senior Cambridge from Karachi Grammar School. In London, she completed her A-Levels from Francis Holland School for Girls. Moving on, in Lahore, she studied at Pakistan College of Law. She then did her LLB from Harvard Law School Cambridge, Massachusetts, USA.

Today, the nomination of Justice Ayesha Malik for her appointment as Supreme Court judge has been approved by the Judicial Commission of Pakistan (JCP) with a vote of five to four. This essentially means that she will become the first female Supreme Court judge in the judicial history of Pakistan. Seniority was presented as a reason not to elevate Justice Ayesha by the opposing legal community. She is number four on the Lahore High Court (LHC) judge seniority list.