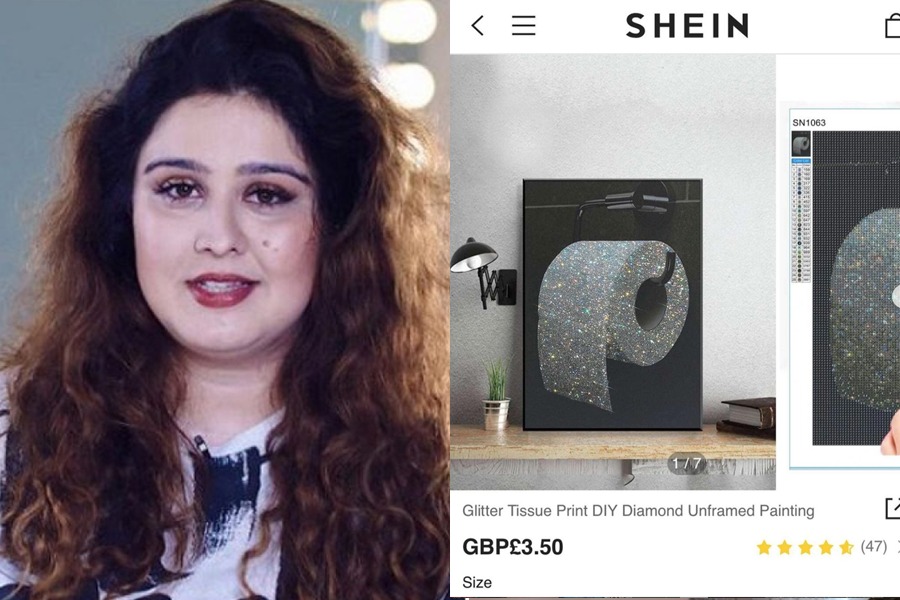 Pakistani crystal artist Sara Shakeel has accused fast fashion brand SHEIN of stealing her artwork and selling it on their website.

On October 8, the crystal artist posted a picture of her latest work, a tissue roll full of crystal diamonds. Shein quickly picked it up and was selling the artist’s work without her acknowledgment. One of the users alerted Sara after finding her painting sold for a couple of pounds on the site.

Following that, the artist posted a lengthy caption with evidence of SHEIN and other sites such as AliExpress, and Al Blue selling low-quality prints of her paintings without her acknowledgment. Making profits off someone’s work without their acknowledgment is firstly illegal and, secondly, downright embarrassing.

Sara said in her Instagram post that SHEIN would be receiving a letter from her shortly. However, she’s aware that unethical companies like Shein receive hundreds of similar letters. “So here’s an update of @sheinofficial @shein_gb STEALING MY ARTWORKS and selling them on their website! 🤦🏽‍♀️ A ceast and desist letter will be sent to them shortly! But that’s not the MAIN problem! Hundreds of letters are SENT to huge UNETHICAL companies like these!”

She added that such companies have the means to fix problems such as these but what really should happen is that there must be a complete boycott of their products. “Does that make a difference to them??? OFCOURSE not! They have all the money in the world to fix that! But you know what can really make a difference???? To ABSOLUTELY CANCEL/boycott a company working unethically so OPENLY and CONFIDENTLY, it’s kind of scary! And to call them out again and again so they never forget! Embarrass them to a point where the person sitting on the top feels the power of the people they are feeding on! The power to fix these unethical companies lies in our hands! Social media has that kind of power!”

She pointed out that the power of social media can do wonders in situations such as these. Internet users can call out companies such as SHEIN repeatedly and stop them from exploiting hard-working artists.

The artist narrated an old incident similar in nature. She said, “Back in the days, I was weak!  I didn’t have a lot going for me when a very famous photographer working for a very famous celebrity & magazine stole my image! The photographer apologized! I remember sharing it with all of you, and tho I was never compensated … but you know when you stand for the right things in life, GOD compensates in ways humans can’t even imagine or think of!! I never had to look back!”

She concluded her post by saying that “I hope they fix this! People running @sheinofficial have thick skins! It’s hard to get through! But I believe Goodness has its ways! I hope they fix this! Not for me alone! But for us artists! If you can share this as much as you can and call them out! It would mean the world to me! ✨🥺 🙏🏽 I would have never known about this if one of you hadn’t told me! Thank you @bls.x for sharing this with me!”

This is not the first time that SHEIN has been in hot waters for the same reason. The company has been called out many times for its unethical practices and fast-fashion clothing line that overproduces cheap quality clothes and has contributed to the climate crisis.