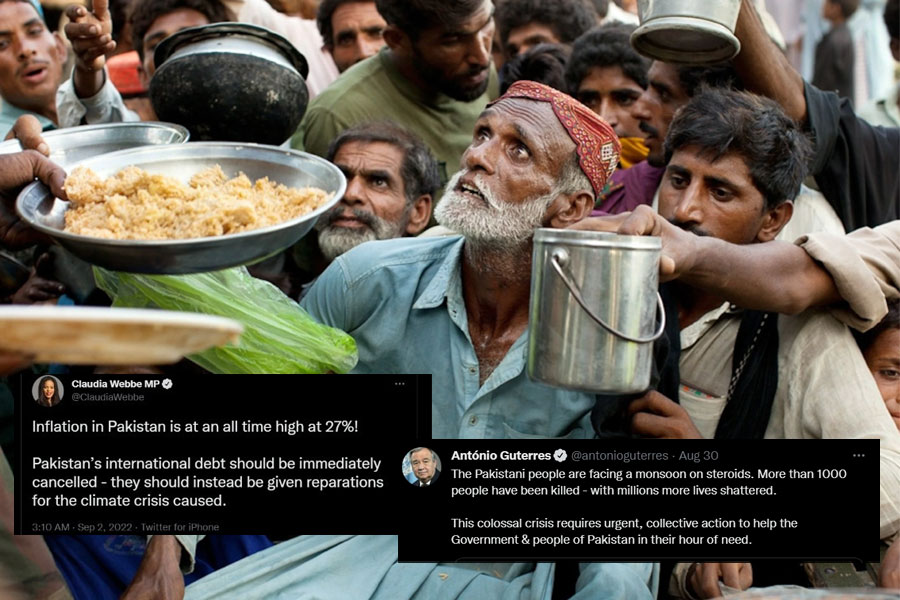 As Pakistan continues to find stability and a ray of hope in chaotic times, world leaders have raised their voices for the nation and its people.

They’ve boldly pointed out that Pakistan contributes less than 1% of carbon emissions, yet is one of the top 10 countries most affected by climate change.

These leaders have asked rich countries that are responsible to step up and help the 33 million flood victims who have been displaced.

Moreover, British MP Claudia Webbe has demanded of the international community immediately cancel Pakistan’s debt as Islamabad (the capital) is facing hazards of climate change due to wrongs done by rich countries.

In her tweet, Claudia Webbe said inflation in Pakistan has reached an all-time high at 27%. She writes:

“Pakistan’s international debt should be immediately cancelled – they should instead be given reparations for the climate crisis caused,”

She is not the only one, Fiji’s Prime Minister Frank Bainimarama has blamed the world’s top carbon-producing industrialized nations for the unprecedented flood disaster in Pakistan.

“Let’s be clear: the Pakistani people did not do this to Pakistan — we all did, and the high-emitting nations are most responsible,“ Bainimarama said in a tweet on Tuesday as he highlighted the dangers of global greenhouse gas emissions.

“Unless we end our species’ addiction to fossil fuels, every country in the world will remain in the crosshairs of the climate breakdown,“ he added.

Pakistan, like Fiji, is among the lowest contributors to global carbon emissions, yet remains highly vulnerable to climate change.

On the other hand, UN Secretary-General Antonio Guterres also urged the international community to come forward and help Pakistan.

“The Pakistani people are facing a monsoon on steroids. More than 1000 people have been killed – with millions more lives shattered. This colossal crisis requires urgent, collective action to help the Government & people of Pakistan in their hour of need,” the UN chief said in a video message.

The Pakistani people are facing a monsoon on steroids. More than 1000 people have been killed – with millions more lives shattered.

This colossal crisis requires urgent, collective action to help the Government & people of Pakistan in their hour of need. pic.twitter.com/aVFFy4Irwa

While some leaders and countries, as well as Pakistani and international NGOs and organizations, are doing whatever it takes to help, it is important to understand the numbers on the table.

Firstly, 33 million Pakistanis are now homeless, Australia has a total population of 25.69 million, this means that 1/3 of Pakistan (or a complete country like Australia) is now homeless, have no food or shelter, and lack basic necessities, not to forget are exposed to water-borne diseases.

Secondly, according to the UN Refugee website, the war between Ukraine and Russia has displaced at least 6.6 million individuals, which means that this flood is 5 times the number, equivalent to almost 90% of Canada’s total population (38 million) and 3 times the population of Portugal.

Thirdly, suppose you take into consideration the number of aid these foreign countries are giving, and also the damage they contribute in terms of carbon emission and other factors leading to climate change. In that case, Pakistan is still at a great loss and at this rate will have to face dire consequences. Canada’s $5 million aid is >50 cents per displaced individual.

Fourthly, England has also contributed its fair share to climate change and its consequences. Since 1750, the English have emitted more than 78 gigatons of carbon, their donation of 800,000 Pounds = 2 pence per person.

What are your thoughts about this? Share them with us in the comments below.