Sunday, June 26 2022
Top Posts
3 DIY Hotpot Recipes You Can Make at...
5 Tips to Keep Your Hair Sweat-Free During...
Fawad Khan to Make Debut in Ms Marvel...
“Women Can Accomplish Anything They Set Their Mind...
TikTok Releases First Album of Viral Hits
Mehwish Hayat Makes Her Debut as a Djinn...
‘Girls are No Less Than Boys’ Says Pakistani...
Punjab Government to Provide Scooties to All Female...
Is Akshay Kumar’s Upcoming Film ‘Raksha Bandhan’ a...
On This World Music Day, Spotify Celebrates K-Pop...
Health & BeautyNews 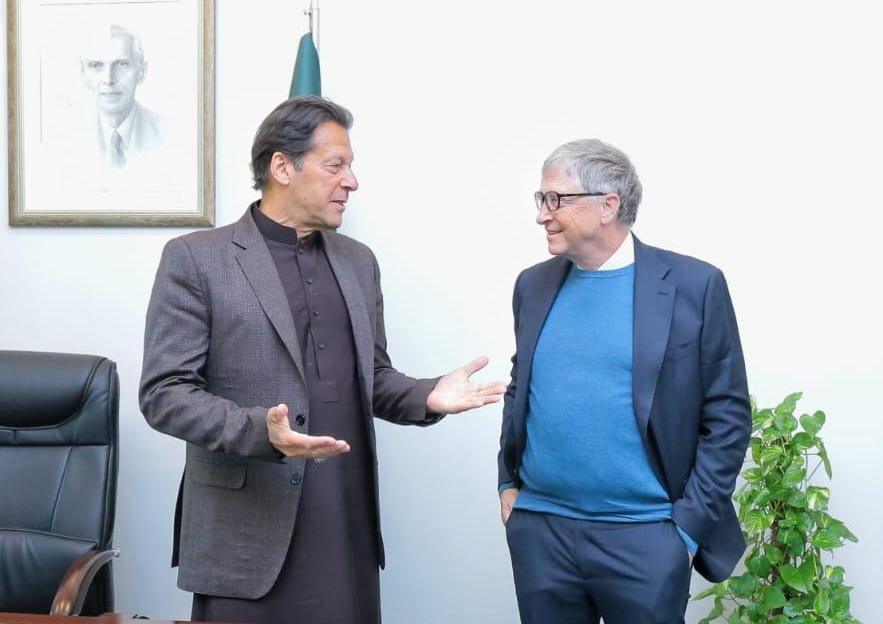 Microsoft Co-founder Bill Gates is visiting Pakistan for the first time. He has been invited by the Prime Minister of Pakistan, Imran Khan to the attend the meeting of National Task Force for Polio Eradication today.

While welcoming Mr. Gates on his first-ever visit to Pakistan, Prime Minister Imran Khan thanked the Bill & Melinda Gates Foundation for its continued support and partnership with the Government of Pakistan in Polio eradication. Mr. Bill Gates thanked the Prime Minister for inviting him and extending warm hospitality on his first-ever visit to Pakistan.

The Prime Minister underlined that the Government is fully committed and determined towards polio eradication.Mr. Gates highly appreciated the efforts of the leadership, health workers, and parents for working tirelessly to ensure that polio never paralyzes a child again.

Pakistan has an opportunity to make history by ending polio : Bill Gates

Mr. Gates said that despite COVID-19 restrictions, Pakistan has performed amazingly and has continued with polio vaccinations. The National Task Force on Polio Eradication paid tributes to the 36 frontline workers and 14 law enforcement personnel who lost their lives during polio vaccination to the children across the country.

Earlier, the Task Force was briefed that Pakistan has completed one year of zero polio incidence. However, the virus has been detected in environmental samples in the southern districts of Khyber Pakhtunkhwa and Balochistan province.

It was apprised that national-level Polio vaccination campaigns have been launched in December 2021 and January 2022 with the integration of routine immunizations for children. There is effective coordination among Federal and Provincial Governments with support from Law enforcement agencies for the provision of security in risk areas.
Provincial Governments apprised the meeting about resources allocated towards the polio campaign and expressed full commitment towards making Pakistan polio-free.

The Prime Minister said that Afghanistan being the primary source of Polio incidence in our two bordering provinces, requires urgent international support to avert humanitarian crises, including health emergencies. Pakistan is providing full support for the sake of 40 million Afghan people in need of basic amenities.

Co-founder of Microsoft, Bill Gates with his ex-wife Melinda Gates walked their oldest daughter, Jennifer Gates, down the aisle ahead of her wedding with Egyptian American professional equestrian Nayel Nassar in New York City. Various international publications reported that the couple first tied the knot on Friday at a Muslim ceremony, which means the couple signed nikkah papers to legitimize the wedding.