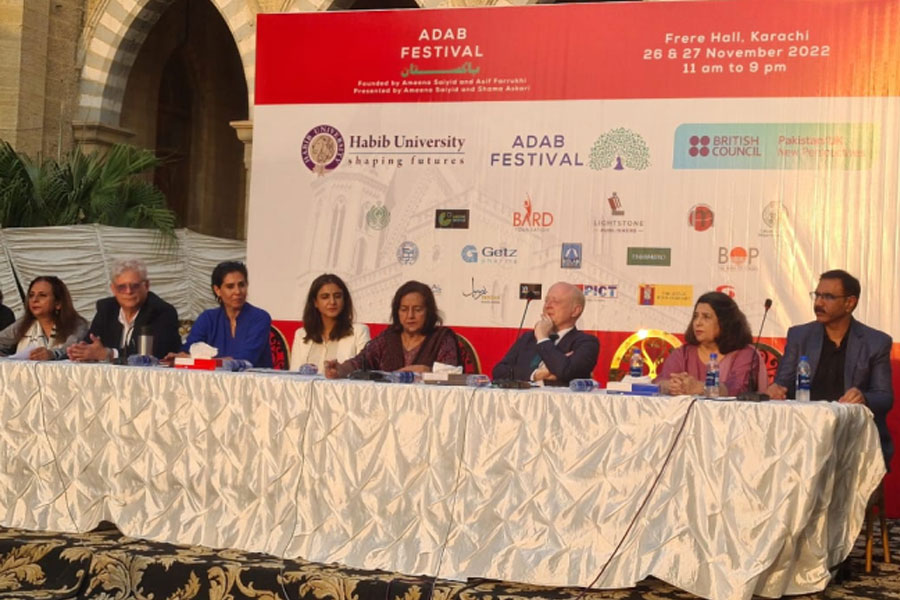 The first day of the two-day Fourth Adab Festival opened to a mammoth crowd here today. People of all ages could be seen jostling with one another as they rushed from one interesting session to the other so as not to miss out on their favourite speakers and authors.

Habib University students participated in sessions and there was a good representation of the youth at the Festival. The morning session began with the inauguration ceremony in which the national anthem and Adeb Festival Song was sung, followed by the welcome address by Ameena Saiyid Founder and Director and Shama Askari Director, Adab Festival.

Ameena Saiyid said, “The theme of the Adab Festival this year is the climate crisis. Adab Festival is a new Silk Route through which our traditions and culture, literature, the arts and their luscious fruits can travel and enter the hearts of people in every part of Pakistan and the world. Through Adab Festival, which is free and open for all, we want everyone in the community to love, experience and enjoy literature. The Adab Festival belongs to Karachi and our community which is why we are having it in an open public space.”

Marrya Rehman, Deputy Director of the British Council, said, “We know that Pakistan is at the very cusp of the climate crisis, and its large youth population must be part of the long-term solution for tackling this global challenge. At the British Council, we have brought under-represented voices – especially those most affected by climate change – into the conversation, for example, by ensuring women and marginalised groups can participate in climate research and grant opportunities. Through arts and culture, we can bring young people together to connect and collaborate on creative responses to the climate emergency. The Adab Festival aims to stimulate conversations around the climate emergency and
inspire transformational change.”

Wasif Rizvi, President Habib University, said, “Pakistan will soon be unliveable for humans. Extreme weather events – disastrous rains, lethal floods, devastating droughts and heatwaves – have made such unimaginable catastrophes a lived reality for the people of Pakistan. Change in Pakistan will likely have increasingly terrible impacts on food security and water scarcity. Despite this existential threat, Pakistan has done little to impact the mainstream climate change narrative. Habib University, being an intellectually vibrant institution, considers it our responsibility to initiate critical discourse highlighting the severity of such existential threats. Habib University’s intellectual programme is aimed at making society think beyond existing narratives and fostering alternative possibilities. The theme of the 4th Adab Festival – ‘Climate Change’ – is close to Habib University’s mission of working towards protecting our ecosystem, hence we are delighted to play our part by joining hands with Adab Festival.”

The opening ceremony was followed by the launch of Fauzia Minallah’s art exhibition comprising artworks and an installation of 100 feet made entirely of waste, and recycled materials.

Other attractions included Zambeel Dramatic Readings, ‘The Lost Lullaby of Mother Nature’ art show by Fauzia Minallah curated by Pomme Amina Gohar. There was also a separate section for children to draw them to reading through storytelling, music, performances, and art.

Highlights included Tariq Alexander Qaiser’s multi-media presentation and talk on Pakistan’s mangroves, a Tribute to the late Asif Farrukhi, co-founder of Adab Festival by Zehra Nigah, Ameena Saiyid, Inaam Nadeem and others, a launch of Moni Mohsin’s latest novel and a session on start-ups by Nadeem Hussain. Aitzaz Ahsan spoke with Dr Huma Baqai about The Indus Saga, Fauzia Saeed’s book on a history of women’s struggles, Tapestry was launched as were booked by Bina Shah, Naila Mahmood, Aysha Baqir and Yasser Latif Hamdani’s biography: Jinnah A Life.

The first day closed with a stand-up comedy by Natalia Gul, Sufi songs and ghazals by Nirmila Maghani from Thar and a concert by Saif Samejo of Sketches. The large pavilion for children was packed with the kids enjoying the storytelling, theatre, and music all day by Atif Badar, Rumana Husain and Fatema Hasan. The audience was riveted and enthralled by the day’s events at Adab Festival.