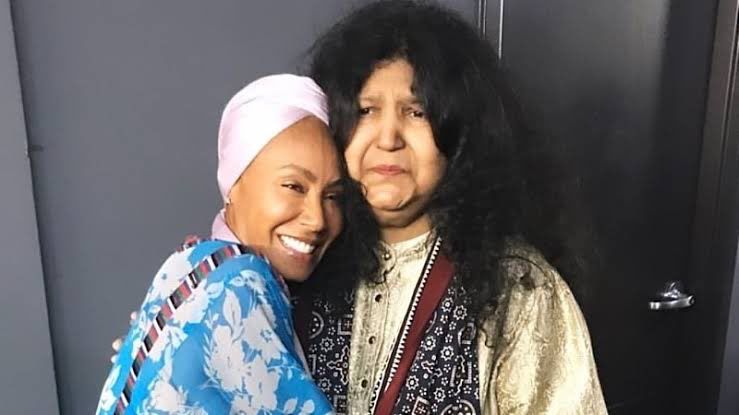 Abida Parveen is a highly esteemed personality in the music industry with fans worldwide. Even Jada is a fan – a photo of her hugging Abida after the concert has resurfaced online. The crossover sent internet users into a frenzy.

Given the present discourse taking place online after the release of the latest Marvel film, “Doctor Strange in the Multiverse of Madness,” an internet user picked the phrase from the movie’s title and captioned the photo of Jada and Abida Parveen on Twitter.

“My multiverse of madness,” wrote the user. The tweet blew up, and internet users marveled at the crossover.

My multiverse of madness pic.twitter.com/o8IkwhjBu4

Thousands quoted the tweet on the micro-blogging site Twitter. A user wrote, “LMFAOOOOO is that Jada with Abida Parveen FFS.”

“ayo????,” said another. It is unbelievable for people to see Abida Parveen and Jada in the same frame.

While some were amazed at the cross-over, others began interpreting Abida’s expressions. “Abida can sense her craziness already.”

“Same energy as Pharrell at the Holi party”

same energy as Pharrell at the Holi party https://t.co/aURAugNguD

Some felt the photos were relevant to them, “I’m Abida parveen. Extremely awkward with hugs or whatever this is”.

I'm abida parveen. Extremely awkward with hugs or whatever this is. https://t.co/E0PFVA1Ped

Someone compared their sister and them, “me getting clingy with my baby sister, who is not at all physically affectionate.”

me getting clingy with my baby sister who is not at all physically affectionate https://t.co/Ec1X8U31kD

Another relevancy is “Me with my extroverted friends.”

Me with my extroverted friends https://t.co/fc4Xe3c2Cv

In 2021, Jada Smith posted a picture of her praying how Muslims pray, covering her head with a headscarf and abaya. Many raised suspensions, including other stars from the fraternity that Jada might as well have converted to Islam, and left comments on her images on Instagram.

Dimple Kapadia is Inspired by the Lyrics of the Song “Aaqa’ sung by Abida Parveen on CokeStudio. Read the full story here:

The iconic Indian actress Dimple Kapadia recently starred in one of the biggest Hollywood blockbusters of the year – the film Tenet, a project of Warner Bros.Directed by Christopher Nolan, the movie starred other talented actors, including Kenneth Branagh and Robert Pattinson. In a recent interview with BBC regarding her experience of working in Hollywood, she talks about this role was a dream come true.