Has Jada Pinkett Smith Converted to Islam? Fans Speculate as She Posts Pictures in Hijab & in Prayer 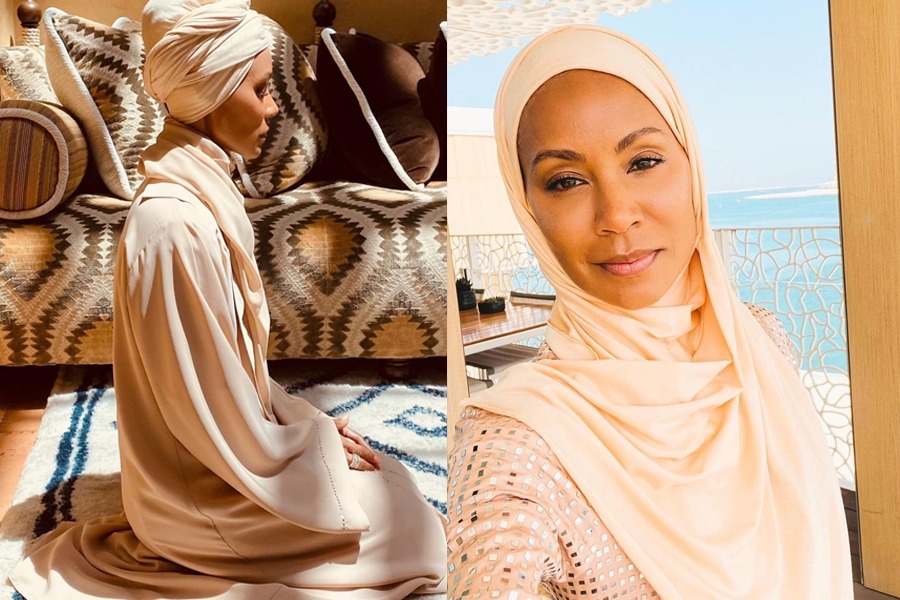 ‘Red Table Talk’ host and American actress Jada Pinkett Smith posted a picture of her praying similar to how Muslim women pray covered in a headscarf and abaya.

While Jada herself has not announced her conversion to Islam, fans speculate if she has, in fact, converted to Islam after her recent pictures of praying on her knees while her legs are folded behind. There were thousands of comments left on her recently uploaded images on Instagram, including other stars from the fraternity.

Earlier on, on the first of Ramadan (the holy month in Islam), Jada posted pictures of herself in the headscarf. She wrote, “I really think the color peach in the Middle East … suits me”.

It is not mandatory in the middle east to cover yourself with a headscarf and abaya like in Saudi Arabia, so the recent pictures raise the question if the actress has taken a life-changing decision and converted to Islam.

In the photo, the actress seems to be at a hotel, with water in the background. Our best bet is that she is in UAE; however, she has not tagged the location, so nobody can confirm the news as to where she is.

Under the photo, Indian actress Priyanka Chopra left a comment describing the actress as “beautiful.”

Just before that, she also posted an image of her wearing an orange flowery skirt with a white top and a denim jacket accompanied by an orange headscarf captioned: “When you are in the Middle East watching @willsmith on his sunrise run in my non-glamour glory, and the talented @jas wants to capture it.”

It is hard to say that the actress fell in love with the culture and, of course, the attire and decided to pose for a few pictures since a recent picture of her praying says otherwise.

Many actors worldwide have chosen to convert to Islam. Snoop Dogg, Ice Cube, Janet Jackson are among many more.