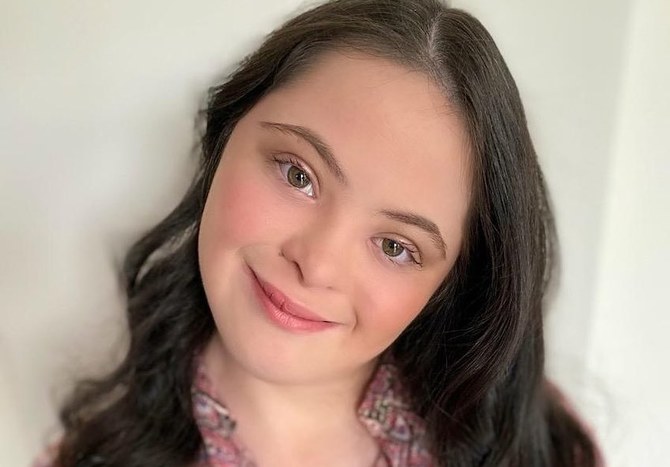 Gucci’s latest beauty campaign has won hearts worldwide by roping in an 18-year-old model with Down Syndrome, named Ellie Goldstien, who hails from Essex. The adorable 18-year-old has modelled for Gucci’s L’Obscur mascara brand, while the shoot’s done by the famous London-based photographer David PD Hyde.

Zebedee Management, which is Ellie’s talent agency, was created to increase the representation of people who have been excluded from the media until now.

One such group that has long been underrepresented in the fashion industry is people with Down Syndrome. Gucci has decided to break the stereotype of going for ‘tall and slender’ models and taken a positive step towards inclusion to overcome the old stigma against models with disabilities.

Goldstien has been modeling for a color cosmetic’s range of an Italian fashion house and was hunted by Gucci Beauty in partnership with Vogue Italia via a social media program.

The latest exclusive series of images reveals the new face beautifully representing her people and shining like a star!  She looks truly happy and ecstatic.

“I love this. Thank you for this amazing opportunity and a fabulous day shooting,” commented Goldstien.

In occasion of the #PhotoVogueFestival held in November 2019, @guccibeauty and @vogueitalia launched an Instagram scouting project. As a result, photographer @davidpdhyde captures Ellie @elliejg16_zebedeemodel and Kadri Vahersalu @kadri_vahersalu for a special editorial featuring the buildable Gucci Mascara L’Obscur. The portfolio is inspired by Creative Director @alessandro_michele’s words: “I designed L’Obscur mascara for an authentic person who uses makeup to tell their story of freedom, in their way.” #AlessandroMichele #GucciBeauty

Ellie always had a flair for theatre and performing on stage. With presently attending a performing arts course at her college, she has always had the passion for modeling. Her success in the fashion world is a major milestone for people with special needs.

The creative director of Gucci, Alessandro Michele while speaking to an online publication revealed;

“I designed L’Obscur mascara for an authentic person who uses make-up to tell their story of freedom, in their way.”

“We called it L’Obscur because this word balances charm and mystery,” he went on.

Gucci is not the only brand in today’s fashion world that has taken praiseworthy steps to increase reach and widen inclusivity. However, Ellie is the first 18-year-old teen with down syndrome to represent such big names!

Filming for ITV News. Watch me tonight at 6pm! 🎬💕

Upon a friend’s suggestion back in 2017, Elli signed a contract with her current talent agency, Zebedee Management and ever since then she has been modeling for brands like Nike and others. Her Nike campaign was aired in Women’s World Cup in 2019.

A big break for other models who are aspiring to get into the fashion scene, for Ellie this is a big step towards inclusivity and diversity.

“I really enjoyed the modeling and loved wearing the Gucci dress. I’m really proud of the photoshoot and would love to be famous. I’m looking forward to modeling for other brands,” she said.

As soon as the campaign clicks came out, she gained immense praise and became the public’s favorite in an instant! Her personal Instagram and Gucci’s official account where her picture was shared, was filled with so much love and positivity.

“We’re all incredibly proud of Ellie and all the lovely comments she has had on Gucci’s Instagram,” said Yvonne. “She has always loved being in the limelight and in front of the camera, she’s very confident and good at taking direction.”

Spokesperson of Zebedee Laura Johnson, addressed the positive response by people and said:

“Inclusion of all people in the industry is so important, not only because it is the right thing to do ethically, but also makes good business sense.”

“Ellie is such a wonderful person inside and out. She lights up the room when she walks in and is such a professional. She is incredibly skilled and such natural beauty. This means the world to her, her family and the wider community. We really hope that all brands take note and including disabled models now becomes the norm.”

Isn’t this amazing news? What do you think?Let us know in the comments below.