Sunday, June 26 2022
Top Posts
3 DIY Hotpot Recipes You Can Make at...
5 Tips to Keep Your Hair Sweat-Free During...
Fawad Khan to Make Debut in Ms Marvel...
“Women Can Accomplish Anything They Set Their Mind...
TikTok Releases First Album of Viral Hits
Mehwish Hayat Makes Her Debut as a Djinn...
‘Girls are No Less Than Boys’ Says Pakistani...
Punjab Government to Provide Scooties to All Female...
Is Akshay Kumar’s Upcoming Film ‘Raksha Bandhan’ a...
On This World Music Day, Spotify Celebrates K-Pop...
CultureSuccess StoriesTrailblazer 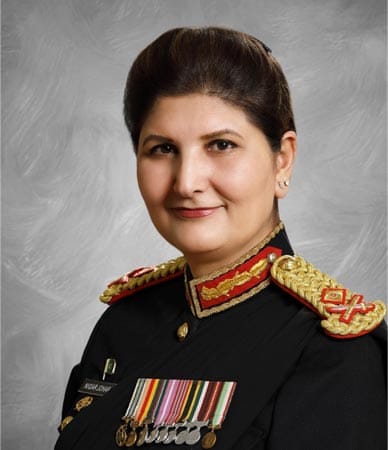 Last year, General Nigar Johar made headlines around the country when it was announced that she became the third woman in Pakistan’s history to hold the rank of a major general in the Pakistan Army. Today, she has become a role model of empowerment for women yet again after being appointed as the first female Surgeon General of the Pakistan Army.

The news was announced by the official social media pages of ISPR in which they wrote:

She also shared the news and wrote:

Alhamdulillah.I will do my best to Serve my Beloved Country.

Alhamdulillah.
I will do my best to Serve my Beloved Country. https://t.co/Iw3vRIB9MD

Lieutenant General Nigar Johar hails from Panjpit, Swabi district and has been serving in the Pakistan Army as Commandant Military Hospital Rawalpindi.

She has done her matriculation from Presentation Convent Girls High School in Rawalpindi and then  graduated from Army Medical College. She received her Master’s degree in Advanced Medical Administration from Armed Forces Postgraduate Medical Institute (AFPGMI).

With her outstanding educational background, we are convinced that she will fulfill her duties and responsibilities exceptionally.

Her Strategy Towards Her Responsibilities

Last year, when she was promoted as  Major General and said that each new rank came as a challenge to her. While talking to Hilal Magazine, she shared:

Allah has been very kind to me all my life and especially through this journey. My work has always given me happiness. The drive to assist people in any way I possibly could has always thrived in me. My passion to help others remained my motivation.

As I grew through age and ranks, each new rank was a challenge and was of utmost importance to me. I am grateful to Allah and then to Pakistan Army for granting me all this success. Army works on merit and I am a testimony to the fact that you need only hard work to excel in the Army.

When she was asked about the gender inequality in the Pakistan Army, she shared:

“Gender discrimination is a social problem not only in Pakistan but also globally. Although the Army, as an institution, is open to the idea of women working shoulder to shoulder with men, as is evident by the considerable number of women serving not just in the Medical Corps but in other departments as well, one does come across minor issues at times.

As soon as the news was shared, a number of netizens appreciated her dedication and efforts for the betterment of the country.

Have a look at what people have to say!

Major General Nigar Johar, belonged to swabi, has promoted as Lieutenant General. She is the first female officer who received this promotion. More power to our women, thriving and making their own identity. Congratulations ma’am. pic.twitter.com/ercOPbOJEk

Maj Gen Nigar Johar from Swabi has been promoted Lt Gen.
She is a proud Pashtun daughter of 🇵🇰. pic.twitter.com/tt8t4c0leT

"Pakistan is my country & I was born here. I was raised here & I think there is no match to Pakistan to anywhere in the World." – NJK pic.twitter.com/z9UFak2VWY

She received a warm welcome on her new appointment.

Hania Aamir To Release Her Own Music Video