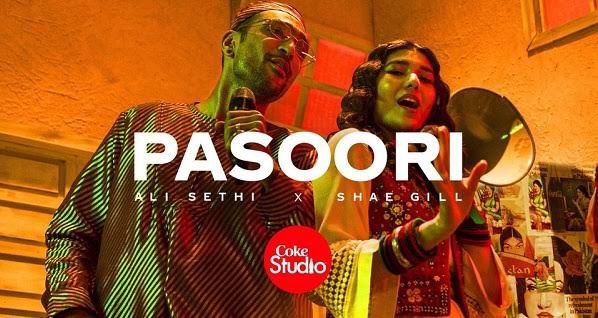 Coke Studio 14 has released its sixth song called ‘Pasoori,’ on the 7th of February featuring the talented Ali Sethi and Shae Gill, which translates to ‘Trouble’. The song transcends boundaries and bridges distance through compassion, love, and identity.

While the song is fresh, the music video is full of aesthetic compositions, designed by Hashim Ali. You can’t ignore but watch repeatedly. In its essence, the song is joyful and is about spirituality, identity, and emotions. The look and feel of the song are very bohemian and spellbinding. It is a treat you wouldn’t want to miss.

Fans of Coke Studio across Pakistan have praised the song for this very reason. Pasoori is fusion at its finest, this might be our favorite from all the songs released up until now.

Watch the Music Video of the Song Pasoori Featuring Ali Sethi and Shae Gill Below:

After its release, #Pasoori was trending #1 on Twitter. Following hashtags were #AliSethi and, of course, #ShaeGill.

Ali Sethi’s fans have increased after the release of this song.

My all time favourite Ali sethi ♥️
I was expecting something High but…That's enough.#Pasoori pic.twitter.com/OPwgvnmSm1

The music video for the song is a winner!

YAAR I CAN DIE FOR ALI SETHI FR. HE'S SUCH A BABYYYY I LOVE HIM SO MUCH kskssk <3 and shae gill is my queen this song was on loop on Spotify but now after watching video im obsessed with #Pasoori 😩💘
✨ shae gill x ali sethi ✨pic.twitter.com/5Mx3FRqscv

“This song is nothing but pure joy; Ali Sethi has such a soothing voice. The set and the whole video are just so fantastic,” wrote a Twitter user in a tweet.

this song is nothing but pure joy, Ali Sethi have such a soothing voice. the set and the whole music video is just. so. fantastic. #Pasoori #CokeStudioSeason14 pic.twitter.com/P5Uw66faeV

Watching two hot people sing together was good enough for me. #Pasoori

Shae Gill’s reaction to her music video is the best, let alone our reaction. Wholesome indeed!

Cuteness ✨ her vibing to the song just like me and all of us lifts my heart ♡ #CokeStudio #Pasoori https://t.co/ARzuZ3zXD5 pic.twitter.com/l9chmbgU2l

“Madness, serenity, and love in the air.”

Other than the singers, the video’s highlight is the iconic Sheema Kirmani dancing and along with Seraiki jhoomar-style dancers, it generates just the right feels

Enjoyed listening to #Pasoori for the few glimpses of this lovely lady. I don't remember exactly, but I think she acted in some PTV dramas way back in time. Very graceful. pic.twitter.com/PrwsQ51oro

#Pasoori keeps running through my mind and my playlist 😅 #CokeStudio14 absolutely nailed it pic.twitter.com/cUm5U0xt2E

Shae Gill is truly an icon.

Shae Gill has me hooked since yesterday, she's an icon 😭❤️✨#Pasoori pic.twitter.com/MkSB2mk1kU

Coke studio season 14 is really doing real magic with everything.
This frame.. the setting.. the classical dance.. the song..ooofff.. #Pasoori is just transcendental in every way possible. pic.twitter.com/Sicw8NFBCF

Someone wrote on Twitter, “It’s that time of year to repost sth like this. “PSL and Ali Sethi are the two best productions of Najam Sethi.”

This composition will be remembered by generations, beyond this world. Such a revolutionary true art. #Pasoori pic.twitter.com/NLdsTFJVxO

And this part is just a master piece. uper se Ali sethi ka 0.5 sec ka wo bangra💞. On loop#Pasoori pic.twitter.com/u956e109QI

THE BEST JOURNEY VIDEO. so so entertaining. & Ali sethi's charm, uff. i've been playing both the song AND the behind the scenes/journey video on loop! just for this man & his antics. WHAT A GUY. WHAT A GUY! [#AliSethi • #Pasoori] pic.twitter.com/icKSWNOyiB

The vocals. The visuals. Ali Sethi and Shae Gill. Everything so perfect. #Pasoori