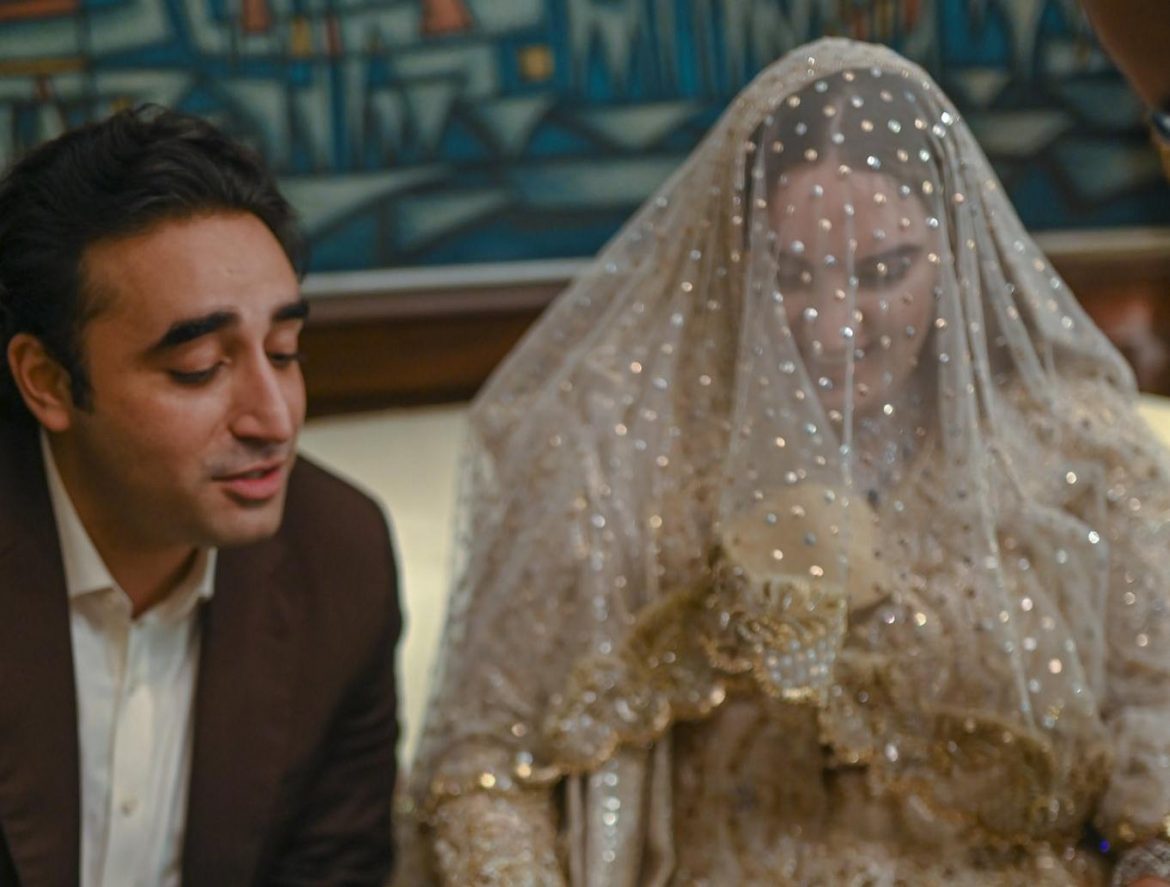 Update: The moment we were all waiting for is finally here! Everyone has been trying their best to get a glimpse of what Bakhtawar Bhutto’s wedding looks like. Last night, chairmen of PPP, brother of the bride, shared pictures from the nikkah ceremony where Bakhtawar tied the knot with Mehmood Chaudhry.

He wrote a heartfelt caption on social media saying, the Happiest moment in many years to see my sister  @BakhtawarBZ getting married. Felt like our mother was watching over us in this moment of joy. Wishing them both all the best for their new life together. Masha’Allah!

Happiest moment in many years to see my sister @BakhtawarBZ getting married. Felt like our mother was watching over us in this moment of joy. Wishing them both all the best of for their new life together . Masha'Allah! ❤️ pic.twitter.com/MAn9wHvp2T

The bride, Bakhtawr, is seen donning a gold-dotted ensemble by designer Wardha Saleem while the groom wore a cream coloured sherwani.

Aseefa B Zardari, the youngest sister of the three, congratulated her sister on this auspicious occasion. She wrote on Twitter: Wishing you a lifetime of happiness and joy. Mubarak Mubarak @bakhtawarbz@mahmoodchoudhryMubarak! I love you, my dear sister. I wish you a happy married life.

Wishing you a lifetime of happiness and joy . Mubarak Mubarak @bakhtawarbz @mahmoodchoudhry Mubarak !

I love you, my dear sister. I wish you a happy married life ❤️

According to a local publication, “A brief statement issued by Bilawal House said that some 300 guests are expected at the main function due to the standard operating procedures related to Covid-19.”

For more news from Bakhtawar’s wedding, watch this space!

Update: Bakhtawar Bhutto-Zardari has been seen showing off her Sindhi Style Heena with her Heena artist – all thanks to PPP’s politician, Sharmila Farooqi who earlier updated us with Bakhtawar’s Shadi Milad pictures that took place on the 24th of Jan. 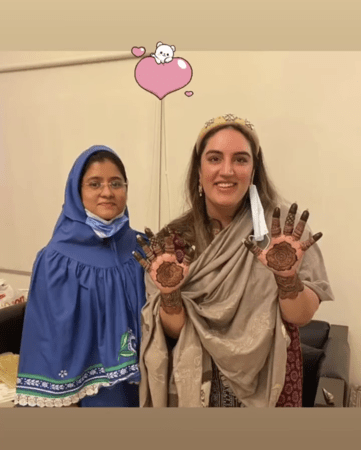 First Pakistani female prime ministers daughter, Bakhtawar Bhutto, is all set to tie the knot with Mahmood Choudhary. The duo got engaged just 2 months ago in November last year in an intimate ceremony.

Bakhtawar shared the following picture on her Instagram stories and also tagged her Mehndi artist. By the looks of it, the mehndi is inspired by Sindhi Ajrak. 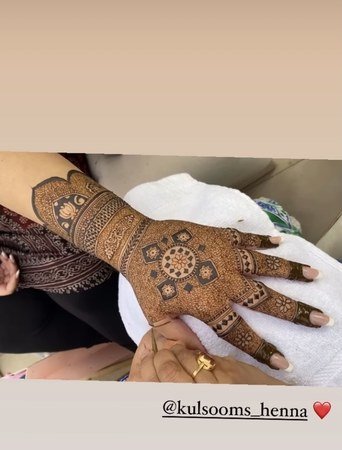 For more news from Bakhtawar’s wedding, watch this space!

As reported by Geo News, PPP leaders have revealed the wedding date of the first female prime minister, Benazir Bhutto’s daughter, Bakhtawar Bhutto-Zardari with her fiancé, Mahmood Choudhary. Disclosed on Thursday, the wedding festivities of Bakhtawar Bhutto will kickstart on 27th January 2021.

The Case of Anonymous Reporters

The news comes from party leaders anonymously as no official announcements have been made by the party, currently chaired by Bilawal Bhutto-Zardari. The Nikkah Ceremony of Bakhtawar and Mahmood will be held on the 29th of January and Valima ceremony on the 30th of January. While the dates are out, no other details have been disclosed, such as the venue, guest list, etc.

According to Geo News, the invitation has not been extended to Ghinwa Bhutto, widow of slain Murtaza Bhutto, which means daughter, Fatima Bhutto, who is also NY Times Best Selling Author and other family members have not been extended an invitation either. Even at an occasion such as this, the political differences can’t be put aside between the two families.

The news from the party leaders looks credible as Bakhtawar Bhutto’s fiancé Choudhary arrived in Karachi a day ago from UAE via Emirates flight EK600. The duo got engaged just 2 months ago in November last year in an intimate ceremony where only bigwigs were invited. The buzz around the engagement ceremony was surreal, and even the invitations card went viral on social media. 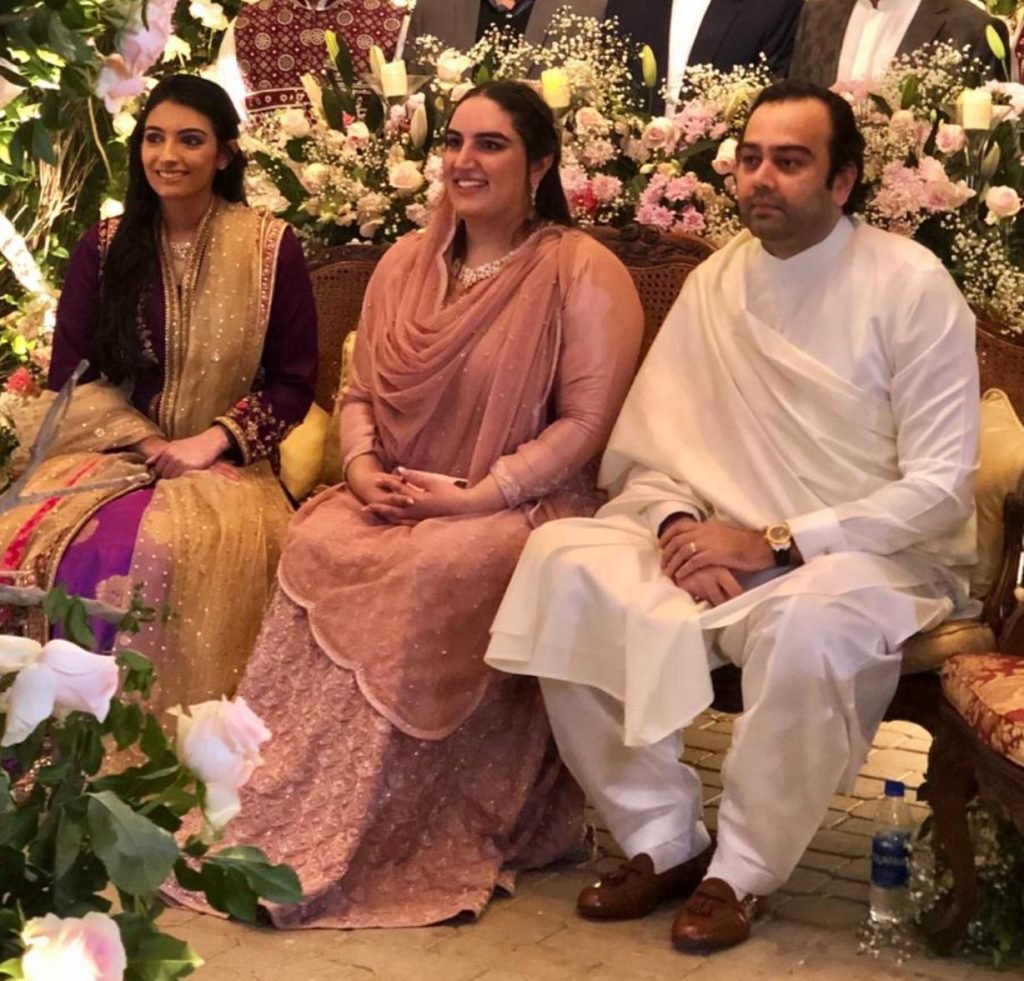 Chairperson, Bilawal Bhutto wasn’t able to attend the engagement ceremony, as he contracted COVID-19. The younger sister, Aseefa, had to fill in Bilawal’s shoes at the engagement and later at PDM’s rally in Multan as he quarantined himself. Read the full story here:

Are you excited as we are? Have something to add? Let us know in the comment section below.

To find out the latest details of Bakhtawar Bhutto’s wedding, stay tuned to Wow 360.

How to Make Prawn Karahi: Weekend on Wow