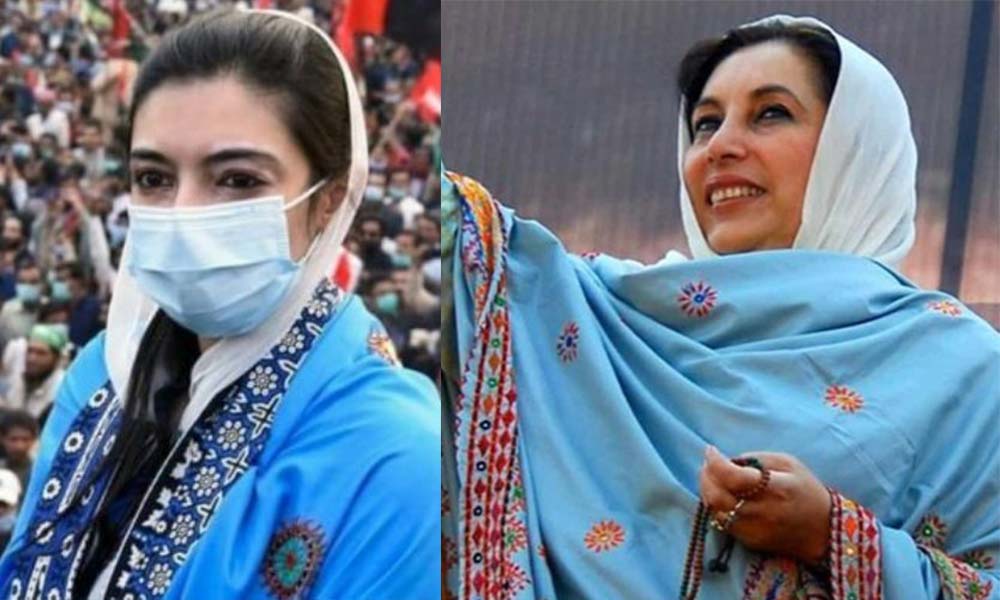 Aseefa Bhutto-Zardari, youngest daughter of twice elected prime minister, late Benazir Bhutto, has successfully inaugurated her political career at Pakistan Democratic Movement’s (PDM) Multan power show. At the age of 27, her debut has people talking about her uncanny resemblance with her mother.  Aseefa has received her education from Oxford Brookes University, The University of Edinburgh, and University College London.

The possibility arrived when Bilawal, chairperson of the Pakistan Peoples Party (PPP), was unwell to attend the gathering. He quarantined himself after testing positive for coronavirus, and Aseefa had to fill in his shoes. Just last week, Bakhtawar Bhutto made headlines after she got engaged with Mahmood Chaudry.

Aseefa delivered her first powerful speech at the PDM power show clad in her mother’s blue chaddar. She said, “I pay tribute to all the party workers and activists that despite all hurdles created by the ‘selected government,’ people have gathered in large number here.”

She added, “If our workers are arrested, then our women leaders are ready to face all challenges.”

Following her debut, people have praised the young Bhutto on social media for her first public appearance

All eyes were on Aseefa! Jahangir Khan Tareen’s son, Ali Khan Tareen, also commented on her first appearance. He said in a tweet, “Aseefa is pretty cool”.

Senator Sherry Rehman also commented on the youngest Bhutto’s debut. She said, “Aseefa shining on stage, making us all proud.”

Spitting Image of her Mother

I see the Reflection of Benazir Bhutto in Aseefa bhutto..

Reflection of my bb-shaheed 💕💕
Benazir is still alive 😍💙❤
Aseefa Bhutto zardari
when I see them, I suddenly remember BIBI 💕💕@AseefaBZ @BBhuttoZardari pic.twitter.com/R0He5xmtXR

People are glad she took the stage.

It is so good to see @AseefaBZ in the practical politics. They took away Benazir Bhutto from us, hopefully her son @BBhuttoZardari and daughter Aseefa will continue to fill the void left by her death.

What do you think about Aseefa’s entrance into the political scene? Let us know in the comment section below.