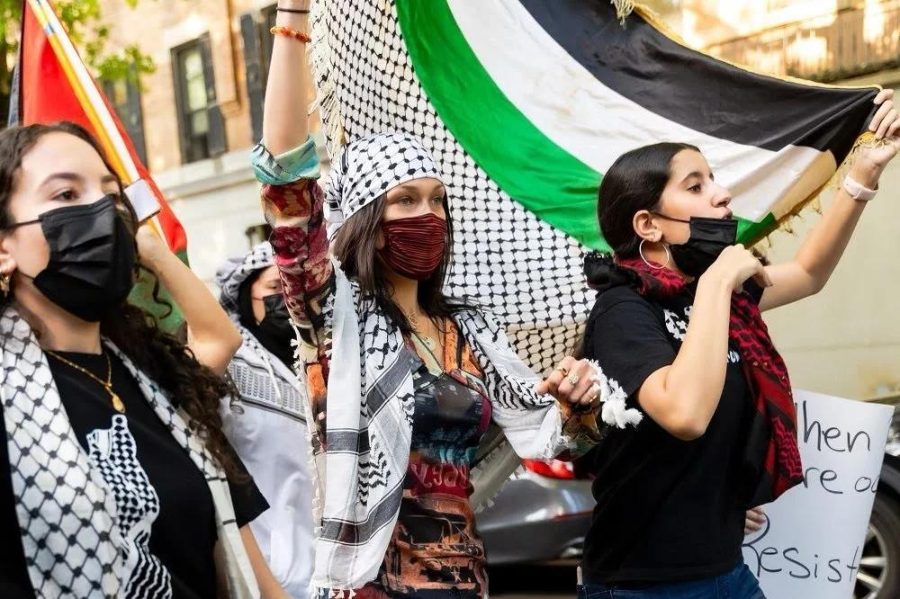 On Saturday, thousands of people worldwide took to the streets to protest the Israeli airstrike attacks on Palestinians living in Gaza.

Protests took place in the US, Australia, Canada, Europe, and the Middle East, with protestors marching with pro-Palestine signs. Celebrities and influencers such as Bella Hadid also took part in the protests.

the world stands in solidarity with Palestine 🤍🤍🤍 pic.twitter.com/m3tA0Ec38Z

The model captioned her pictures from the protest where she is seen wearing a keffiyeh — a scarf with the traditional Palestinian print: “The way my heart feels. To be around this many beautiful, smart, respectful, loving, kind and generous Palestinians all in one place… it feels whole! We are a rare breed!!
It’s free Palestine till Palestine is free!!!
P.s. The Palestinian drip is real
#FreePalestine”

As a model and an influencer with a massive following of over a 42million on Instagram, Hadid can likely lose the millions worth of endorsements after openly showing support for her ancestral country, Palestine. This can jeopardize her career, which she is aware of, but, regardless of the fact, she chooses to support her people.

Knowing that she has millions at stake, and her career, Bella Hadid has been out in NYC protesting for Palestinian freedom. This is true loyalty to mankind and to her Palestinian roots. Cannot imagine our own celebrities ever being this brave and fair. pic.twitter.com/CoMlumDeI9

Not only is Bella protesting out on the streets of NYC, but she’s also educating people about Israeli atrocities by using her 42 million followers strong Instagram account. It surely is the true loyalty to mankind and her Palestinian roots.

GiGi Hadid’s sister Bella Hadid, the most important American model of Palestinian origin, stood today in Brooklyn with Kofi and the flag of the clay in solidarity with Jerusalem and Gaza 🇵🇸#Ghazaunderattack pic.twitter.com/EmnseFIDCl

She uses her platform to expose unbiased coverage and censorship on social media, which is also a massive contribution to the cause.  Many celebrities wouldn’t choose the same path as her because of the fallout they can face in their careers after raising their voice against the country that homes some of the biggest brands in the world.

Bella’s father, Anwar Hadid, wrote in a post:  “No one should be allowed to erase a race .. you can’t close your eyes … the Pope did in WW1 and WW11, and the rest of the world stood by silently.. while my parents took two Immigrant families from the port of Haifa to our home is Safad. On a ship that went to Cuba, then NYC, and ended up on the Palestinian shores of Haifa .. we welcomed them into the Sabagh, the Al Khouri family in the same area of Safad .. that my story. And there 1000 other stories like that. “

Gigi Hadid and Bella Hadid have raised their voices against the atrocities of Israel against Palestinians. The supermodels’ father, Mohamed Anwar Hadid, is a Palestinian born to a Muslim family. So naturally, the current suffering of the people of Palestine hits home for the two stars.