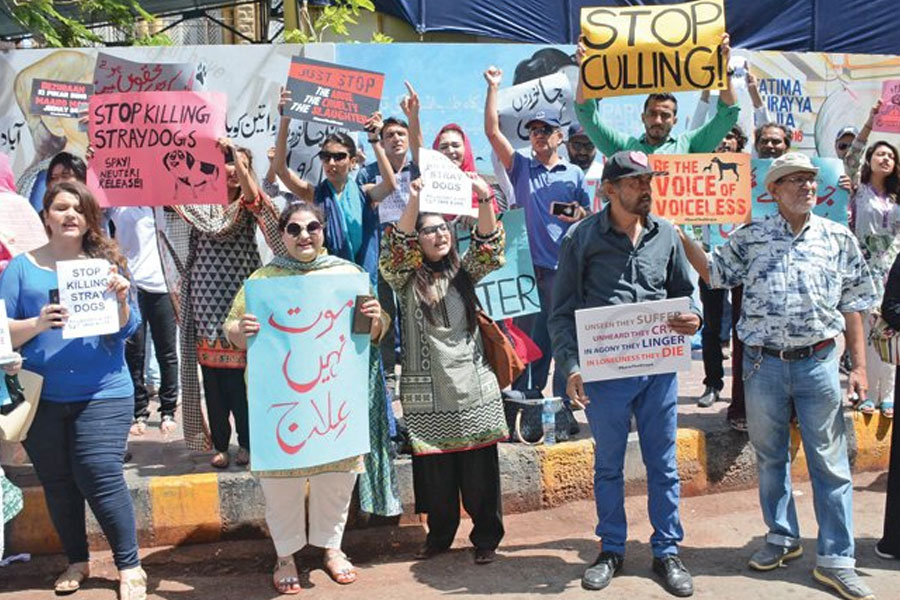 Animal activists are furious over the recent dog culling incident in an animal shelter in Lahore.

Reportedly, a group of individuals attacked Noori Butt’s shelter house and killed almost 90% of the animals.

“At least 90% of dogs have been murdered mercilessly in an attack by unidentified people at the animal shelter of Noori Butt in Lahore,” the team said in a social media post.

The group even killed young pups along with their mothers, some with bricks, while some were strangled. Moreover, the group also destroyed the shelter in the process.

Videos of the shelter showing the chaos and dead bodies of the dogs are now making rounds on social media with people calling for action to be taken against those who have carried out this disgusting act.

Watch at your own risk:

The team also mentions that Noori Butt had gone to Hunjer Waal Chonki Niazbaig police station to register a first information report (FIR). However,  the police did not agree to take any action against the attackers.

‘For those asking if she tried to file an FIR. Yes, she tried doing that for the past 24 hours with no help from them ( Thana Hunjer Waal Chowki Niazbaig). Imagine you get a call saying some people came to your shelter and killed all these innocent beings and destroyed the place you spent so much time building. Would you be able to function seeing the tortured bodies of your lovely little friends?’ read the post caption.

This act comes as a surprise as just recently in July the government announced a series of welfare actions for animals including the introduction of an Rs15,000 fine and jail term for those found guilty of cruelty.

Just a couple of days ago, animal rights activists and welfare organisations organized a protest in Islamabad, Lahore, and Faislabad. The peaceful protest was conducted to demand the protection of animal rights and the prevention of unlawful culling.

The agenda of the protests included the following:

1. The Government of Pakistan has clear laws against animal cruelty and dog culling but they have not been implemented properly.

2. Incidents of dog poisoning culling on the orders of government-related departments and housing societies in several cities are rising.

3. The voiceless (animals) are not alone in their plight as several humane and compassionate activists want these malpractices to end.

4. Creating awareness among the general public and highlighting these issues through the media