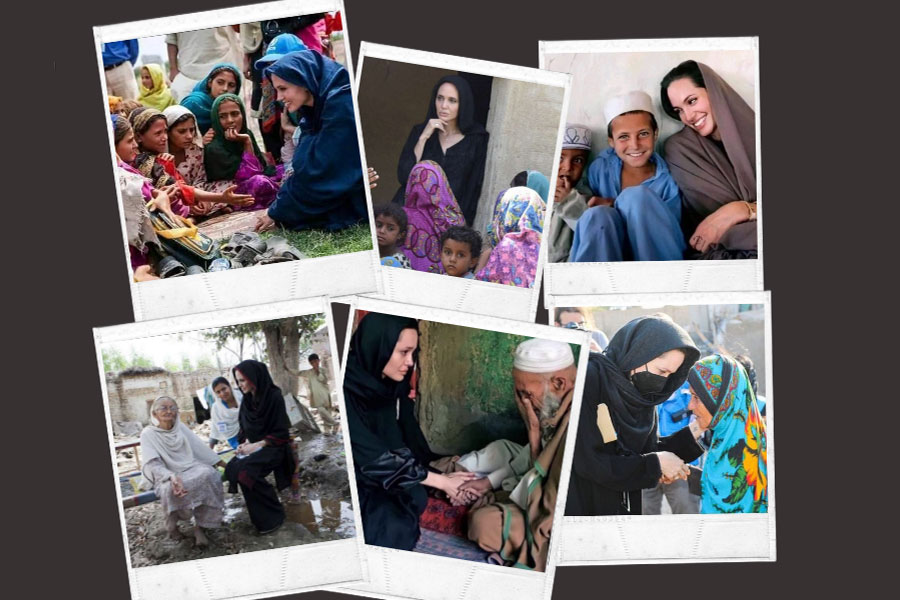 While some Pakistani celebrities are in Canada for HUM Awards 2022, other celebrities like Hadiqa Kiani are working on the ground to help flood-hit survivors. One such international celebrity in the country is humanitarian and famed actress Angelina Jolie.

Jolie visited Pakistan in 2010 and 2005 prior to this visit during the devastating floods and earthquakes. She again visited this year with a team of United Nations members. After she visited the affected areas and met with the families, pictures of her showing utmost empathy towards them started to surface.

Social media was full of praise, appreciation, and emotions. Angelina Jolie also spoke to the media about her own on-ground experience while visiting the flood-hit areas. In her statement, she revealed that the views that she saw and the scenario were something that she had never seen before.

She added that Pakistan is in need of aid and urged countries to step up and help the millions of people who are now homeless and in despair. She stated:

I’ve never seen anything like this and I have as you mentioned been to Pakistan many times. I came first for the generosity of the Pakistani people have shown to people of Afghanistan over the years as a host country. It’s often the countries that don’t have as much they give more than so many other countries and now at this time we see the countries that cause less damage to the enviornment that are now bearing the burnt of the disaster and the pain and the death.

And I am absolutely with you in pushing the international community to do more. I feel like we say that often, we speak of aid appeals, reliefs, and support, but this is something very very different. I this this is a real wakeup call to the world about where we are at.

Climate change is not only real and is not only coming, its very much here and even as somebody who spent a part of humanitarian aid for years, we often look at a crisis and we think of how to solve it, what we can do, what to rebuild, or how to help the children or food, and now we are in a situation like this where the needs are so great, and truly every effort is either a life or death for so many people.

Every current effort that I’ve seen, I’ve seen the army, I’ve been with the army and with my colleagues, and I have seen those lives who were saved, but I’ve also seen those who are speaking to people, thinking that if enough aid doesn’t come, they won’t be here in the next few weeks, they won’t make it, too many children, soo malnourished, and even if they make it through these next months, with the winter coming, and the destruction of crops , and the hard reality… I am overwhelmed but I don’t feel, its fair to say, because I am not living this, so I just simply try to speak out and help. I really can’t imagine what it feels like to be there.

"they won't be here in the next few weeks, they won't make it. Too many children so malnourished.. I'm overwhelmed but i feel it's not fair to say that bec I'm not living this but I'll try to speak out and help." – #AngelinaJolie visits NFRCC after assessing the damages yesterday pic.twitter.com/5tGbaNkRz4

Asides from Angelina Jolie, Mufti Menk is also in Pakistan and has visited the flood-affected areas. “DEVASTATION! Pakistan needs us! Unimaginable situation! DONATE A TENT! Give comfort to a family! £100 per tent!” he wrote in one of his posts.

‘To my beloved friends and followers in Pakistan. I visited parts of Sindh with just one intention. To reach out by delivering some aid and creating further awareness about the plight of the millions who’ve been affected by the devastating floods. Please forgive me for not being able to entertain any unrelated meetings, visits or invitations. I made no exceptions. I love you all!’ – he continued.

Ertugal famed actor Celal Al was also seen carrying out relief work and helping the flood survivors. Last year he visited Pakistan with friends and had a great time. This year again, he has come to Pakistan, soon after hearing about the disastrous floods.