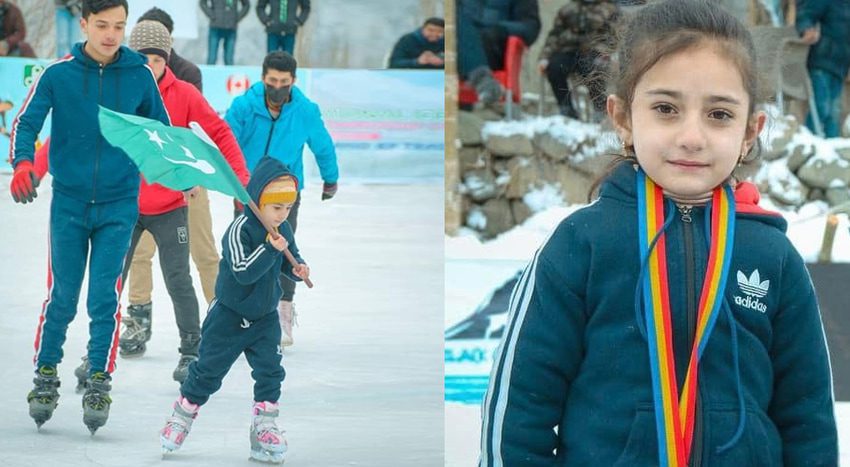 A 4-year-old girl named Mahnoor from Nagar district in Gilgit-Baltistan has won a silver medal in an ice speed skating competition held in Hunza.

From the 17th of January to the 23rd of January, winter sports competitions were held in Gilgit-Baltistan near Nagar. Mahnoor, a 4 -year-old alongside a large number of athletes, participated. Many won the competition and stood on top ranks and took gold and silver medals home, and of course, made their parents proud.

Mahnoor, a Preschooler from the Hooper Valley based in Nagar district, participated in one of the competitions called the ice speed skating competition. Much to everyone’s surprise, the little girl stunned her parents and the people of her district by winning a silver medal. Her victory truly brought the people of Nagar and Gilgit-Baltistan a sense of pride.

In areas up north, girls were refrained from participating in outdoor activities, including sports. With time, girls’ sports have received ample support from the locals regardless of their cultural norms.

Residents of Gilgit-Baltistan, including Nagar, have expressed contentment over the outstanding performance of Mahnoor. While speaking to the media, her father said that his daughter, at such a young age, is obsessed with sports. His father then added, “girls from remote areas should leave their homes and participate in sports. Like the moonlight, they will succeed”.

From Gilgit, the Gilgit-Baltistan Girls Football League is another one of the initiatives in the region that is taking a step further to promote sports in the region for women.

Malak Faisal is Pakistan’s first-ever figure skating champion born in Libya and raised in Dubai who has achieved plenty at the tender age of 12. A video of Faisal ice skating in Hunza went viral in the latest advancements. Known famously as the “Pakistan’s ice princess,” Malak sat down and revealed some facts and details about her journey as an ice skater in an exclusive interview.