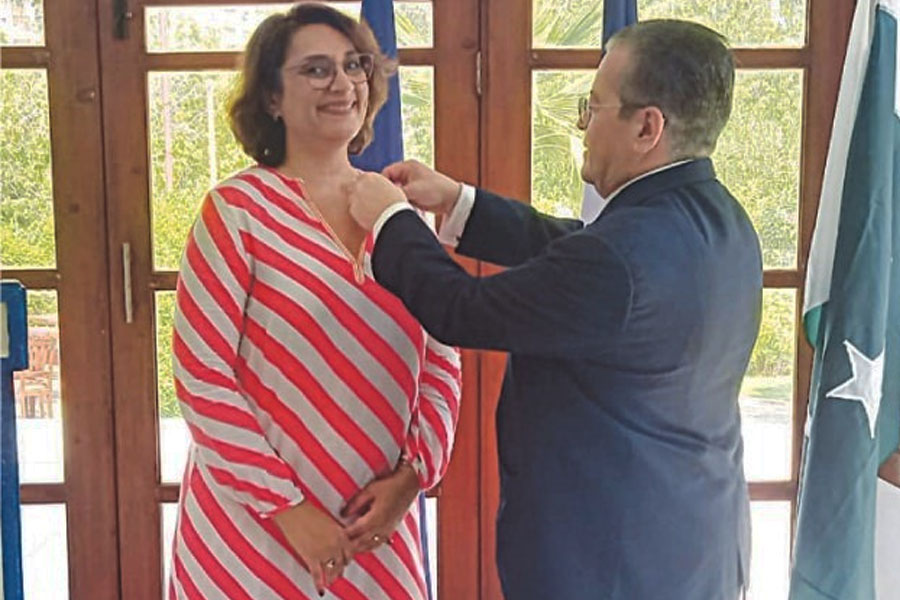 While speaking at the occasion, Mr Galey highlighted note-worthy compliments of Shah and shared that she returned to Pakistan after acquiring her higher education in the US. Since then, she has contributed a tremendous amount because of her passion for literature.

She has published no less than two collections of short stories and five novels, among which there’s the bestseller Slum Child published in 2011 and A Season for Martyrs in 2014.

Moreover, he added that Shah’s feminist commitment and roots in the city of Karachi described so well in her books, her internationally recognised literary career and her dedication to the French language and culture were some of the reasons for honouring her.

Her written work on major social issues has highlighted not only the need for improvement but also highlighted the beauty of the country on its own. Bina Shah is an advocate for girl education and women’s rights as well. She has spoken out loud for the support for the millions of women and their families that have been displaced by the recent floods as well.

Shah thanked the ambassador for his kind words and shared that she started learning French at the age of 12, went to the US for studies and carried on learning. She returned in 1995 and ever since the Alliance Francaise has been home to her. Her love for the French language continues – a language that very few speak because we have no historical ties to France “except for its beauty, except for the principles and values that France represents.”

I was inspired by her (Anne Ernaux) when she said it’s not only an honour but a responsibility. That’s how I feel. I promise that I will carry it [insignia] with the respect that it deserves, I promise to work to bring the two cultures [French and Pakistani] together. I’ve always felt that cultural diplomacy is the way that countries build bridges. -Bina Shah

We congratulate Shah for receiving this great honour and hope she continues to break the glass ceiling.