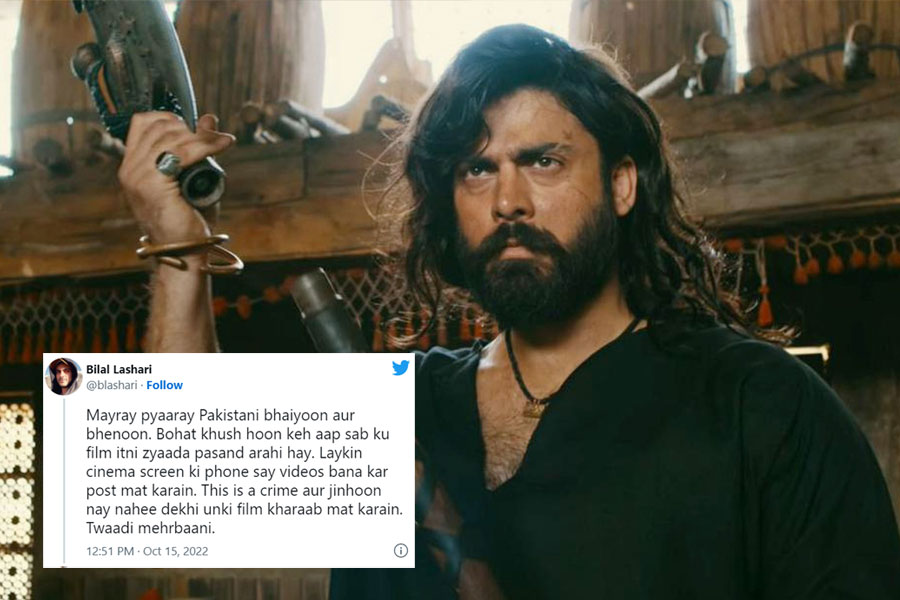 Bilal Lashari and Ammara Hikmat’s much-awaited movie ‘The Legend of Maula Jatt’ has received praise and the audience cannot stop raving. With a stellar A-List cast and incredible supporting actors, the movie has captivated hearts.

Social media users are excited as they share their experiences after watching the movie. But at the same time, Lashari and Hikmat reached out to the public requesting them to understand that sharing images and clips from inside the cinema is an actual crime.

Piracy has been a challenge to the entertainment industry for a while now. Due to pirated versions being available online without any costs, the industry faces a loss of millions at a time.

Taking to their own social media, both Bilal Lashari and Ammara Hikmat have requested the public to understand the dire consequences it holds.

“Laykin cinema screen ki phone say videos bana kar post mat karain. This is a crime aur jinhoon nay nahee dekhi unki film kharaab mat karain (But please refrain from sharing videos of the film of the cinema screen from your phones. This is a crime and ones who haven’t watched the film, you are ruining their experience).” Lashari added. “Twaadi mehrbaani (thank you).”

“Please DO NOT post any clips of the movie on social media or YouTube. You are not only ruining the movie experience for others but also hurting the film’s potential business,” Ammara Hikmat shared on Twitter.

Pls DO NOT post any clips of the movie on social media or YouTube. You are not only ruining the movie experience for others but also hurting the film’s potential business. #TheLegendOfMaulaJatt

Strict legal action will be taken against those posting movie recordings, videos on their social media accounts or channels. #TheLegendofMaulaJatt#MaulaJatt2022 pic.twitter.com/P0oHSmQTcB

"The Legend of Maula Jatt" lives true to its expectations. It is a huge contribution to our cinema.
The cinematography and background music is exceptional.
Fawad and Hamza have done total justice to their roles. Mahira was average. #MaulaJatt#TheLegendOfMaulaJatt pic.twitter.com/I8mdM682dH

Above all, #MaulaJatt is A proper Movie and Not a Drama-numa-Film.
As a Paki cinema-goer ,One actually feel proud watching it.Acting, direction,sound,action,dialogues. Everything is Phenomenal.Huge.#HamzaAliAbbasi Uff what a Performance!His character at times overshadowed FK. https://t.co/sAY9vslQmU

Gruesome in keeping with the legend and flawless in its attire. Cinematography,sound,action and acting has taken a leap with this single movie.Hope there is no turning back. Bahraini audience is mesmerized. Standing ovation@AmmaraHikmat #MaulaJatt @TheMahiraKhan @mahwashajaz_ pic.twitter.com/7A7FUzPXU3

Not too long ago Nadeem Baig also declared to take action against Pakistani e-commerce platform Daraz as his film ‘Quaid-e-Azam Zindabad’s pirated version was being sold on the platform for Rs. 20’.

We have served a legal notice to Daraz.pk for selling our film #quaideazamzindabad pirated version on their website illegally and damaging the film business while it’s playing in Cinemas across Pakistan & abroad, #boycottdaraz we believe in our justice system – he tweeted.

Do you think the government needs to take strict action against piracy for the sake of the industry? Share your thoughts with us in the comments below.

Mahira Khan Opens Up About Her Own Mental Health Challenges