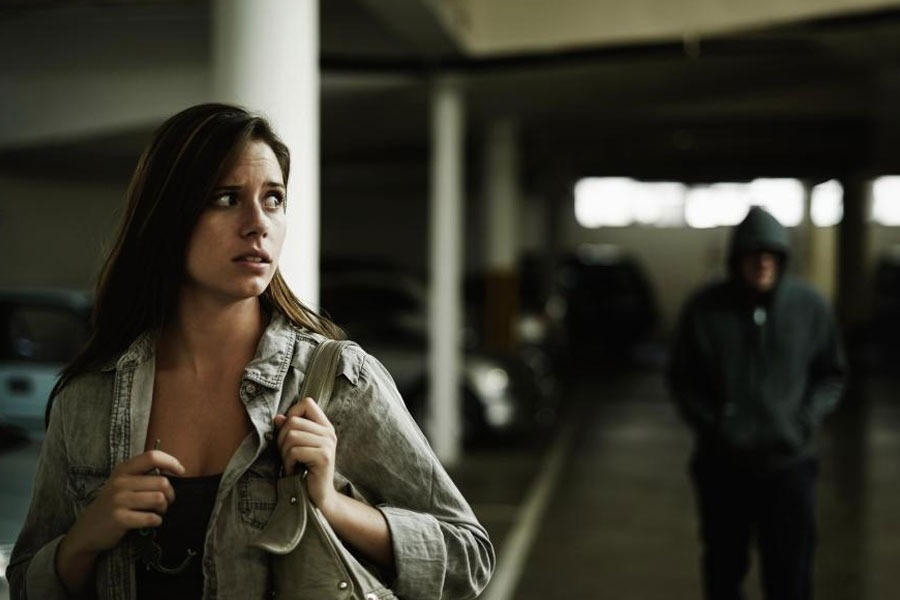 Recently a Reddit user posted a question to which the thread went viral with over 2.1k reactions.

User u/SmegFrog asked ‘how common is it for you to feel unsafe due to the potential threat of a man whilst walking in the street?’

The thread received many answers from women around the world. While some reactions were generally common, some answers left us in utter shock.

Here’s what these women had to say:

Reddit Users React to ‘How Common it is for Them to Feel Unsafe in the Streets?’

When I go on my regular walks, just around the block in my neighbourhood, when I see men(a man) walking towards/behind me, I cross the street or just tense up. So it’s pretty common lol. I didn’t even realise I was holding in a breathe until I walk passed them’

User samentha_gracilis second the comment saying ‘Me too. pretty much anytime I go outside.

On the other hand, a male user toxicfeelings shared that his fiance is terrified of walking outside due to her past, moreover, he asks if there is anything men can do to help women feel more comfortable especially at night, such as maintaining a distance so that they won’t think the person means any harm.

User downtownflipped writes ‘BPM at 158 the other day when a man blasting music sped past me, then parked up the road, got out, and just stood there. I did a 180 and walked two blocks around to avoid him. Scared the shit out of me.’

Other users shared their experiences as well. 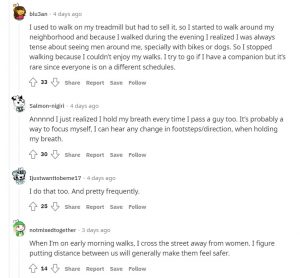 However, there were some who had never encountered feeling unsafe. User ssssejin writes:

‘I might, sadly, be in the minority, but I’ve never felt unsafe walking the streets, not even alone in the middle of the night when I’m heading home from the pub. I don’t get male attention, which includes the unwanted kind, and so I’ve genuinely never had a reason to see a man as a threat. My only fear while passing strangers is being laughed at (anxiety is a blast!), but violence isn’t something I’ve ever had a single worry about.

Though in most larger cities, there are absolutely districts I won’t visit, especially at night. I doubt I’d be a target for anything else than maybe a robbery that’d lose me my phone, but it’s still just an unnecessary risk I don’t need to take. And that still isn’t because of a man specifically; In a shady neighbourhood I’d be varied of everyone.’ 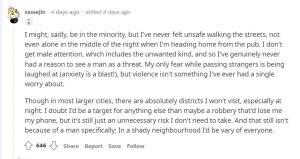 I remember walking home drunk on several occasions, across town, at like 2 or 3 in the morning by myself. Sometimes it would take me an hour or more to get home. I’d be going from the club so wasn’t wearing the most protective clothing but somehow I always made it home without any trouble. Looking back now that terrifies me and I can’t believe how stupid/lucky I was.

Took the words right out of my mouth. I could walk downtown in the dark and feel very safe where I live, partly because I’ve never once received a threatening/sexual comment from a man, and partly because where I live crime rates are extremely low. I might worry about being robbed carrying a stack of cash downtown at midnight, but I honestly wouldn’t even do too much even then.

Do you feel safe at night walking amongst men in your area? Share your thoughts with us in the comments below.