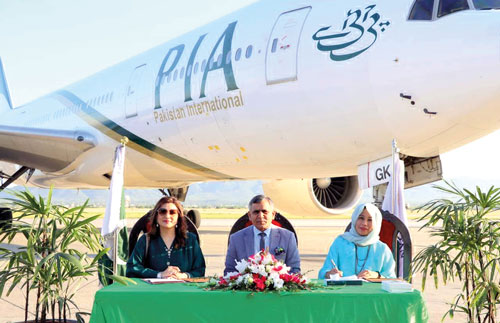 The United Nations (UN) termed Pakistan International Airline (PIA) as a ‘harassment-free carrier. At an event in Islamabad, the national airline will receive harassment-free airline honour.

Sources confirm that the event was attended by PIA CEO Arshad Malik, Federal Ombudsperson for Women’s Protection Kashmala Tariq, and UN representative.  The CEO, Air Marshal Arshad Malik, said that the airline aims to promote a safer environment for women to travel.

Pakistan International Airlines (PIA), United Nations (UN) Women Pakistan, and the federal ombudsperson for protection against harassment (FOSPAH) in Islamabad signed a memorandum of understanding (MoU) to promote safe mobility for women. They also pledged to prevent harassment of women in public and workplaces.

According to a press release, “There are perceived and real risks that limit women’s mobility and capacity to contribute to the country’s social and economic success. It is every woman and girl’s right to be able to move freely and without fear of being harassed,” it stated.

Pakistan International Airlines (PIA) has gained fame and earned appreciation from international organizations in the past month. This also includes the United Nations (UN) for uplifting foreign nationals and journalists from Afghanistan’s capital, Kabul, in August—the same day the Taliban took over Kabul. Additionally, continuing its compassionate flights carrying food aid to Afghanis.

The United Nations have recognized Mr Touheed Daudpota for his act of kindness. He has been declared a He for She champion by the organization. The PIA crew member was seen in photos and clips on social media soothing a baby crying on a flight from Karachi to Islamabad. These clips went viral, and people applauded the crew member for displaying empathy and gender sensitivity.