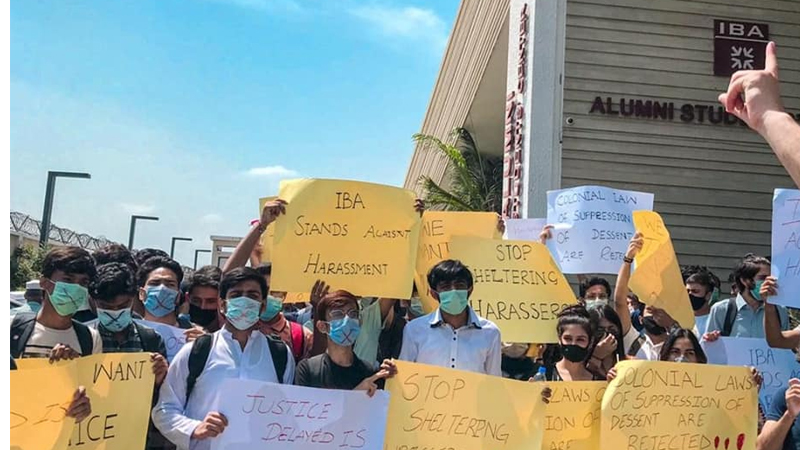 Institute of Business Administration (IBA) Karachi has expelled a student, Mohammad Jibrail from BS Economics, who was about to graduate in 2 months, for publicly speaking up about the incident of alleged harassment on campus.

Jibrail had witnessed a female employee in the finance department being allegedly harassed by a male employee in a supervisory position. He shared what he had witnessed on social media for which he was expelled for not using the “right channels that are expected to be followed” by the institute.

Activitst Jibran Nasir also shared what had happened with the BS Economics student. He said in an Instagram post that Jibrail comes from Lakki Marwat. He was studying at IBA on scholarship. His crime was talking about the incident on Facebook.

Nasir said Gibreal did “email concerned authorities at IBA about the incident internally but clearly IBA appears more concerned about its public image as opposed to addressing the incident of harassment.”

In response, IBA wrote a lengthy post on Facebook reminding students of correct channels to report such cases. There are “several platforms to the students where concerns can be taken forward including the Grievance Committee, Anti-Harassment Committee, Disciplinary Committee, Office of the Registrar, and the Executive Director’s Office,” says IBA’s Facebook post.

A student of executive director, Dr. Akbar Zaidi who chooses to stay anonymous spoke to Wow 360 exclusively to shed light on the matter.

“Dr. Akbar Zaidi was my professor for pak history. He would always talk about women’s rights/ freedom of speech. His lectures included him saying multiple times how important students and their security is. He even told us, if you have any concerns, anything at all related to harassment or any kind of misconduct, his office is in xyz building and we can just walk in anytime. That same person signed the notice of expulsion of Jibrail. He was about to graduate in 2 months, I believe. This is, simply put, a violation of freedom of speech. It was restricted in the worst possible way. And it basically tells the student body that if harassment ever takes place, our institution, even our best professors will not care about us but the reputation of the institute.”

Another student who chooses to stay anonymous believes that it was the student’s fault who took it to social media and did not report through the correct channels.

To be honest, I remember exactly how concerned our IBA student body is about harassment which was evident from the 12-15 members (300+ capacity auditorium) present in the official 3-hour session arranged by IBA when they outlined their harassment policy. In that session, we asked various questions and were given guidelines to submit any modifications we would like in the process. Dr Akbar Zaidi was also present. In that session all the channels of reporting harassment were explicitly communicated to us, the entire procedure and the rules related were well explained. But only 12-15 people attended (it was embarrassing, I along with a friend went around campus begging people to attend!) What I am trying to say is, there is a process of doing things in any institute under whose authority you are by the virtue of the acceptance letter. If you do not follow the rules you will be expelled. I support IBAs decision, raising voice is our right but going against the rules we agreed to when we got enrolled, only serves to ruin the purpose than support it.

Politician Sharmila Faruqui also didn’t agree with IBA’s decision to expel student. She took it to social media and said, “Disgusted and appalled by this action by IBAKarachi.”

Jibrael from Lakki marwat expelled from @ibakarachi for exposing a male staff harassing a female staff. His crime was to speak against injustice & women’s right. Disgusted & appalled by this action by #IBAKarachi pic.twitter.com/B1YSHMBIiW

Even actors are calling out IBA for expelling a student who chooses to practice his right to freedom of speech. Pakistani actress Mahira Khan said the decision by IBA was ‘shameful’.

More power to Jibrail who stood against the harrasment he saw take place at #IBAKarachi. He was asked to accept that he commited a mistake by reporting the incident on social media, to apologize for damaging IBA's reputation, and to drop the charges against the accused. (1/2) pic.twitter.com/Rl9A379MSL

This is Akbar Zaidi. As a speaker, academic & author he advocates Student Unions at conferences encouraging students to have an opinion but as Executive Director of @ibakarachi he just expelled a student for reporting harassment on campus & encouraging other students to speak up https://t.co/rBgRvk3ozT pic.twitter.com/Q9sPqgsXCE

This is a terrible & outrageous decision by @ibakarachi – people who speak up@about harassment & abuse should be celebrated & awarded, not punished.

Take this ridiculous decision back, & all IBA alumni must raise their voice against this fascism by an education institute. https://t.co/OubBTjXWa6

Journalist Zarrar Khuhro said, “This is a gross overreaction from IBA which must be set right. Such measures can and will only backfire.”

This is a gross overreaction from IBA which must be set right. Such measures can and will only backfire. https://t.co/Ig888hvn8m

You know your "disciplinary decision" lacks merit when it needs to be "explained" with this long a statement which despite its verbosity makes for little actual sense. #IBAkarachi

Are ‘Flaws In Our Laws’ in Pakistan Promoting The Culture Of Harassment And Rape? Read the full story here:

There is often news of women being harassed, raped or murdered in Pakistan.  These crimes have now escalated to a level where women are not the only victims, young boys and children are now also part of the evil game.  PM Imran Khan has spoken to HBO in an interview about the rising sex crimes in Pakistan. He mentions that the topmost crime in Pakistan was of a sexual nature and the majority of these cases were of child abuse with only” 1% of them being reported. ”

Are ‘Flaws In Our Laws’ in Pakistan Promoting The Culture Of Harassment And Rape?