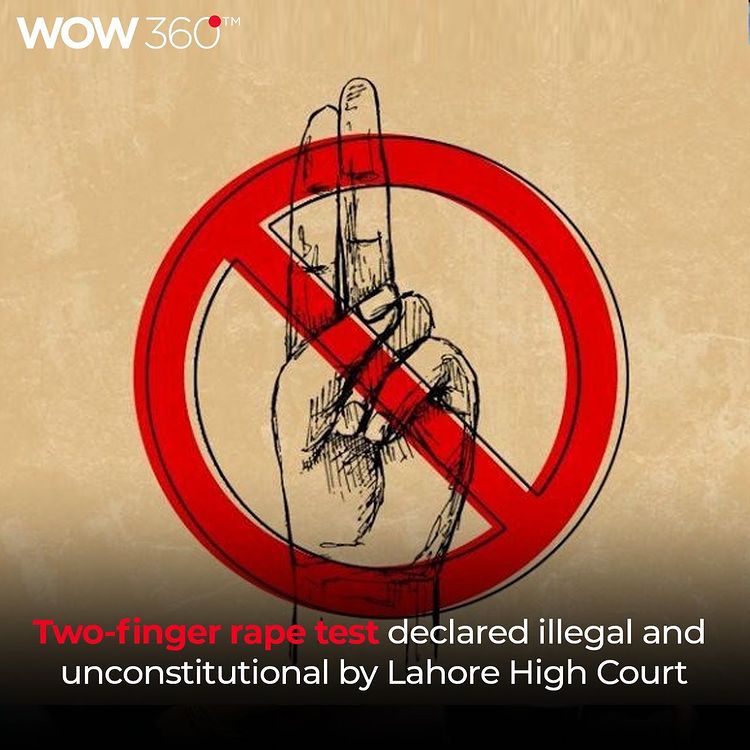 On Monday, The Lahore High Court (LHC) declared virginity tests, including the two-finger test (TFT) “illegal and against the Constitution” for the examination of sexual assault survivors.  These tests hold “no forensic value” in cases of sexual violence.

Justice Ayesha A. Malik, in a 30-page judgment, wrote at length about the virginity test. She said that the test “offends the dignity of the female victim” and conflicted with Article 9 and Article 14 of the Constitution. These articles are related to the security and dignity of a person.

Malik also stated that the tests mentioned above are “discriminatory against the female victim as they are carried out on the basis of their gender [and] therefore offend Article 25 of the Constitution”.

The federal and provincial governments are directed to take imminent measures to “ensure that virginity tests are not carried out in the medico-legal examination of the victims of rape and sexual abuse.

Women in law announced the news in a tweet: “In a historic judgment by LHC, the two-finger test and the hymen test have been declared unscientific, discriminatory, illegal & unconstitutional with direction to provincial govt to devise appropriate medico-legal protocols.”.”

In a historic judgement by LHC the two-finger test and the hymen test have been declared unscientific, discriminatory, illegal & unconstitutional with direction to provincial govt to devise appropriate medico-legal protocols… pic.twitter.com/qpM2I45nsO

welcome decision but earlier the anti-rape ordinance already banned this test and it is applicable across the country. https://t.co/0ytxERjalY

What is a Virginity Test:

1. Examination of the hymen

The hymen is a thin membrane that surrounds the opening of a women’s vagina. The hymen’s examination is conducted to conclude that women who have engaged in sexual activity have torn hymens.

The two-finger test is where two-fingers are inserted inside the vagina of the victim to evaluate the opening to verify penetrability. If the vagina admits two or more fingers, the woman is declared to have been active sexually.

The petition quoted WHO, the United Nations agency responsible for international public health, declaring that these tests are not medically based.

“Neither the size of the vaginal opening, nor the ease with which the fingers can be admitted, or the state of the hymen is medically sound indications of prior sexual activity,” it adds.

Such tests have previously been banned in our neighboring countries India and Bangladesh. We are glad Pakistan took the steps in the right direction. Have something to add? Let us know in the comment section below.