Sunday, June 26 2022
Top Posts
4 Antioxidants That Your Skin Needs if you...
5 Ways to Prevent Ovarian Cysts in Women
3 Lassi Recipes to Beat the Heat in...
3 DIY Hotpot Recipes You Can Make at...
5 Tips to Keep Your Hair Sweat-Free During...
Fawad Khan to Make Debut in Ms Marvel...
“Women Can Accomplish Anything They Set Their Mind...
TikTok Releases First Album of Viral Hits
Mehwish Hayat Makes Her Debut as a Djinn...
‘Girls are No Less Than Boys’ Says Pakistani...
FashionFeatured 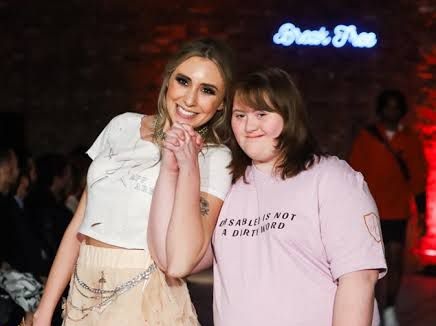 We have witnessed the youngest model with down syndrome walk the runway of New York Fashion Week (NYFW) for the first time, which broke barriers set for ages by the industry.

The fashion show has the press, models, buyers, fashion industry giants, and the general public present as an audience, making it an excellent platform for Emily to walk on the runway and represent people with Down Syndrome.

Sarah captioned the clip on social media, saying that her sister, Emily, has smashed “expectations that lie within the fashion industry.” She was able to showcase with her walk that people on the runway don’t just “look, walk and dress a certain way.”

The clip uploaded on TikTok has since then been viewed by more than 2.2 million people.

What did the Sister duo wear for the Runway?

It was evident that Emily wouldn’t walk in clothes other models wore. She walked down the runway with her sister Sarah wearing a baby pink T-shirt, saying, “Disabled is not a dirty word.” The short was paired with gray leggings and black sneaker. On the other hand, Sarah wore a tulle skirt and a white T-shirt with black heels.

Such representations are great for the morale of other people with the same condition, watching people who break barriers.

Gucci’s latest beauty campaign has won hearts worldwide by roping in an 18-year-old model with Down Syndrome named Ellie Goldstein, who hails from Essex. The adorable 18-year-old has modeled for Gucci’s L’Obscur mascara brand, while the shoot’s done by the famous London-based photographer David PD Hyde. Zebedee Management, which is Ellie’s talent agency, was created to increase the representation of people who have been excluded from the media until now.