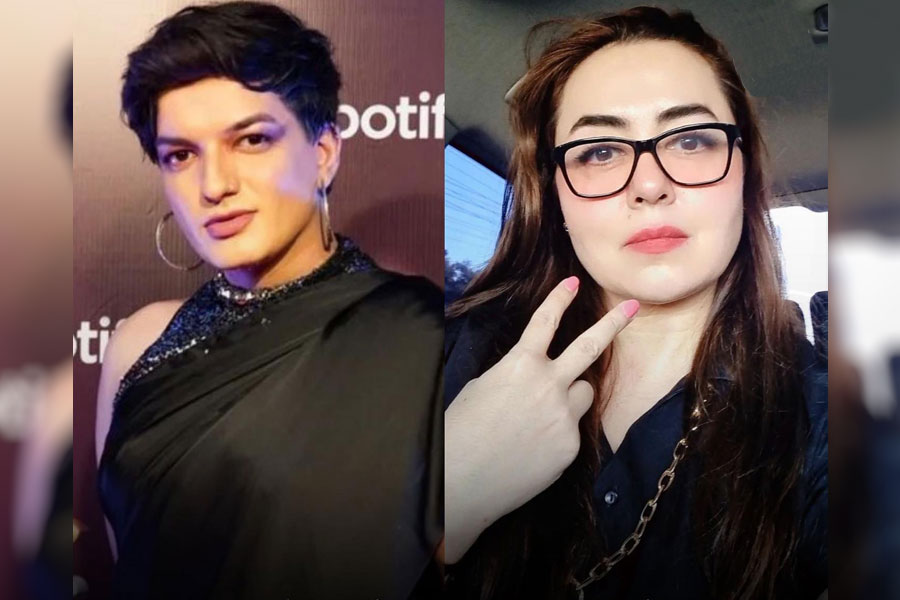 Mehrub Moiz Awan aka Dr. Moiz has always been very proud to call herself a Khawajasira (transgender). She has been vocal about her opinions and has been a role model for many in and out of the community.

However, recently Awan shared a post in which she mentioned that she has been barred from speaking at the TEDxISL platform in Lahore because she is a trans person.

Awan took it to social media to describe the entire incident:

In a meeting to review my draft speech, which according to the ISL admin is absolutely up to the mark of all TEDx regulations, I was informed that I am being removed from the speakers panel because some parents have stated that they can’t allow transgender people to speak to their kids. This is the International School Lahore btw. No objections to the talk, no additional censorship, just flat out refusal because “parents ko aitraaz hai k koi transgender talk day” Their exact words. Verbatim.

Is this even legal? And if it is, is this censorship?
I hope that the other speakers stand in solidarity and walk out of the TEDx because transwomen in Pakistan have stood for all the causes that are being represented by them. My talk wasn’t about me – it was about the racist colonial legacy of transphobia in Pakistan.
I also hope that the media that is covering this asks ISL why was a transgender person removed abjectly for being transgender while nothing about the talk was contrary to any TEDx guidelines.
A part of me tells me that this wasn’t any parents, but someone very senior in the management. that’s because during the meeting it slipped from someone’s tongue k “hum sir sey baat karaingey” and for folks who are from ISL perhaps can verify this guess of mine.

Many men and women took it to social media to share their two cents and support Awan. Oscar-winning filmmaker Sharmeen Obaid Chinoy also tweeted after the incident went viral saying that “That is grounds for their Tedx license to be revoked.”

Dr Awan is not only a well-known activist but also a trained doctor but yet, her credentials were not enough to protect her from feeling discriminated y the organisers of Ted X ISL.

On the other hand, things escalated with Pakistani designer Maria B taking it to her social media to call out Awan, claiming that she is not a member of the trans community but a man who wants to transition into a woman.

Furthermore, Maria shared more screenshots of concerned parents who believe that Mehrub Moiz Awan is not a fit role model for their children as she uses abusive language, dresses inappropriately, and also encourages drugs. 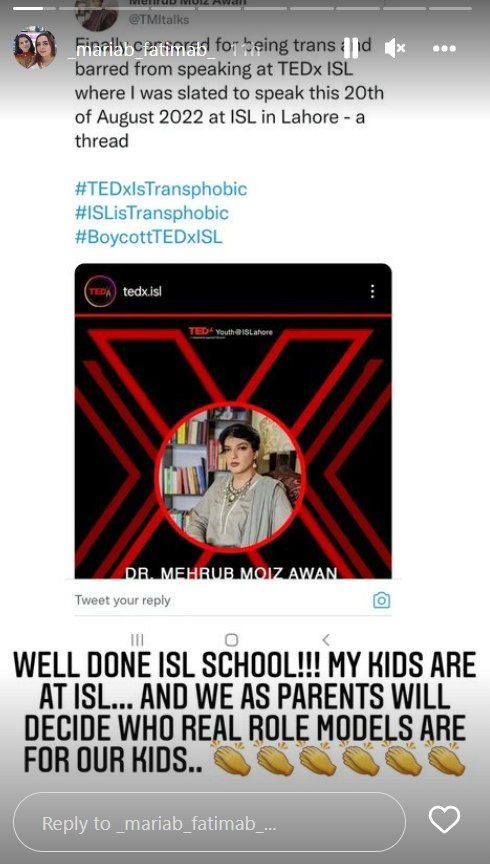 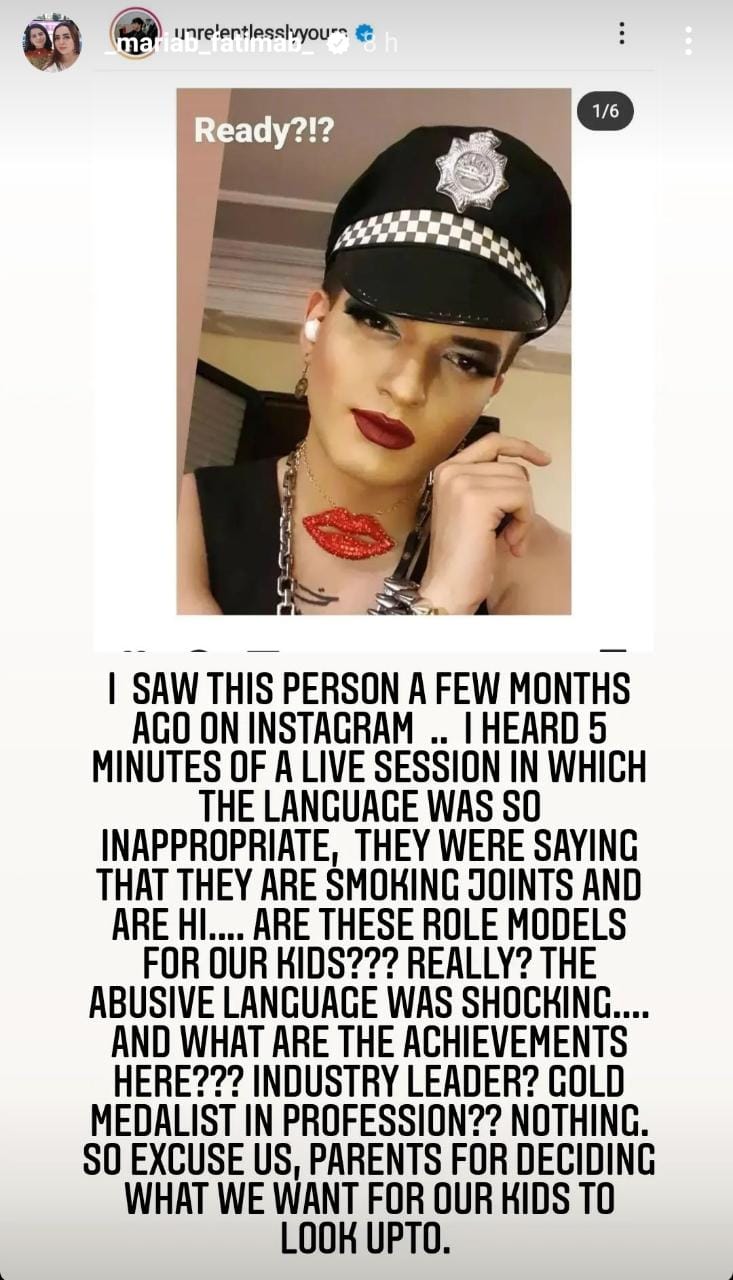 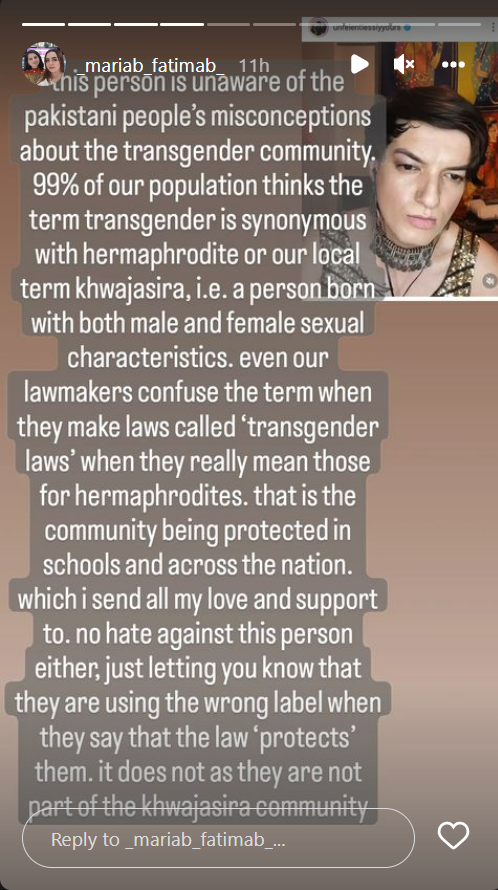 On the other hand, Awan shared that by removing her from the panel, the platform has violated her rights as per the Pakistan Transgender Persons Protection Act 2018 clauses and claimed that Maria is a ‘transphobic’ person. 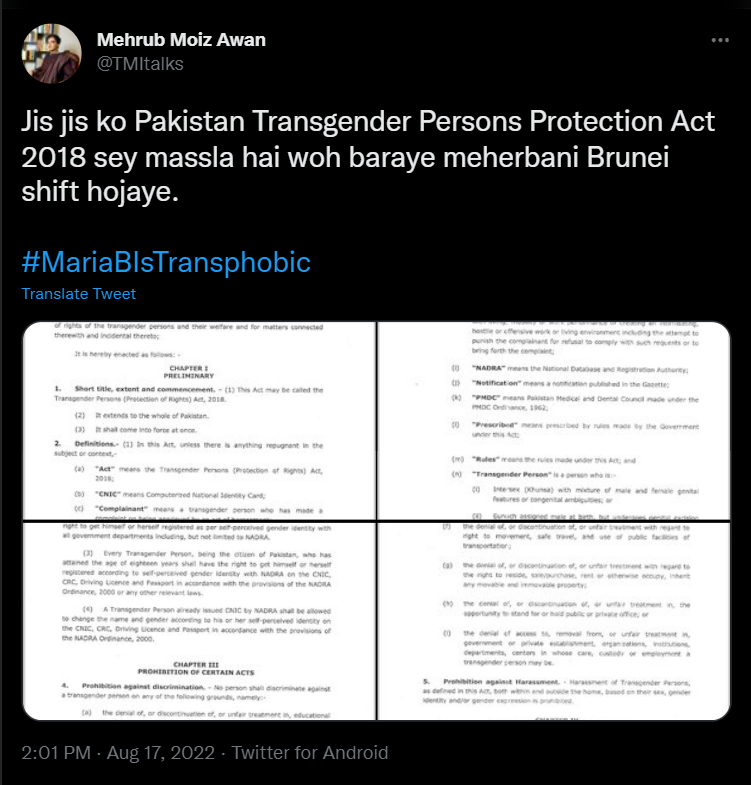 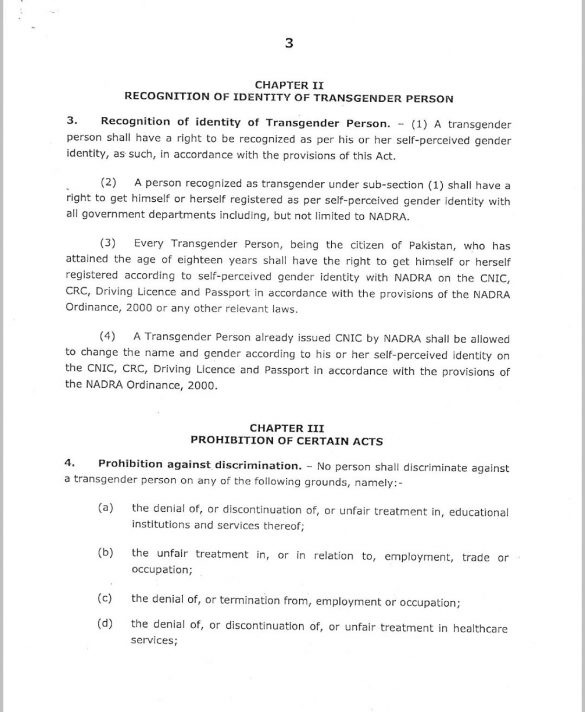 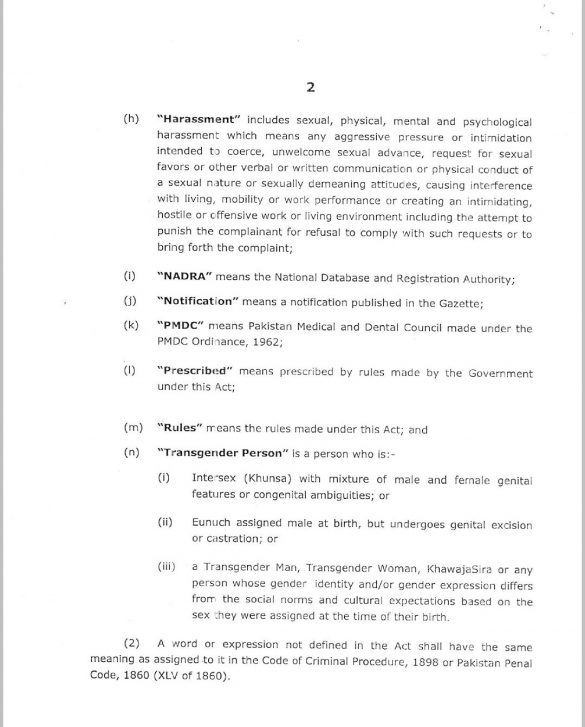 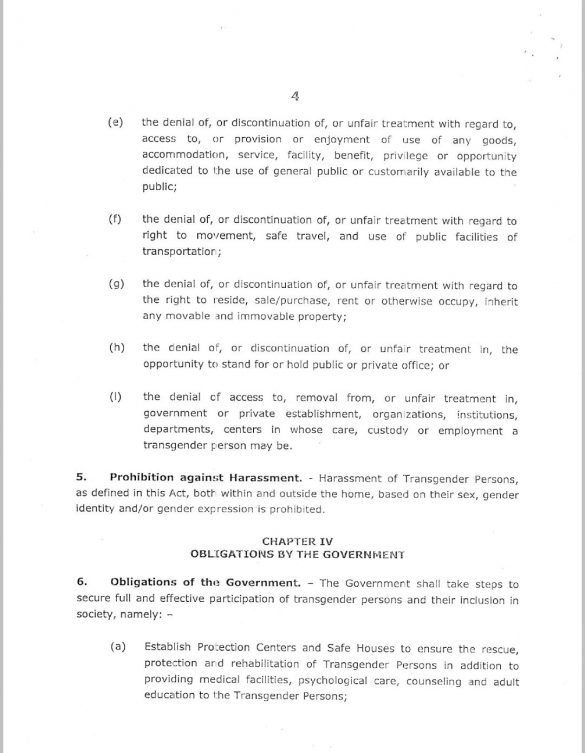 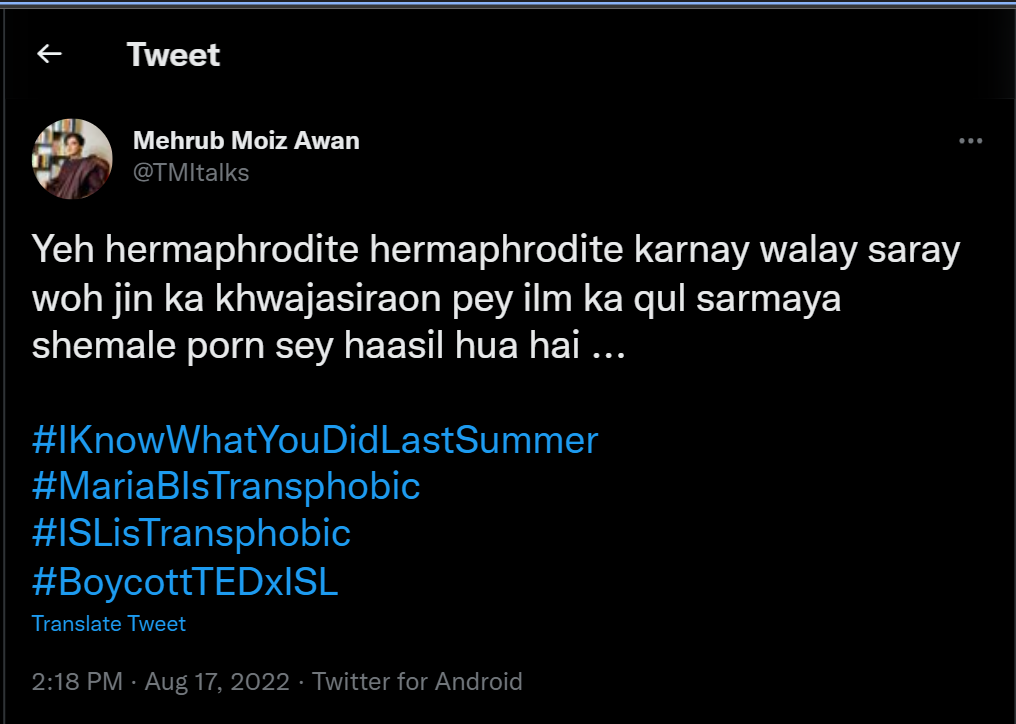 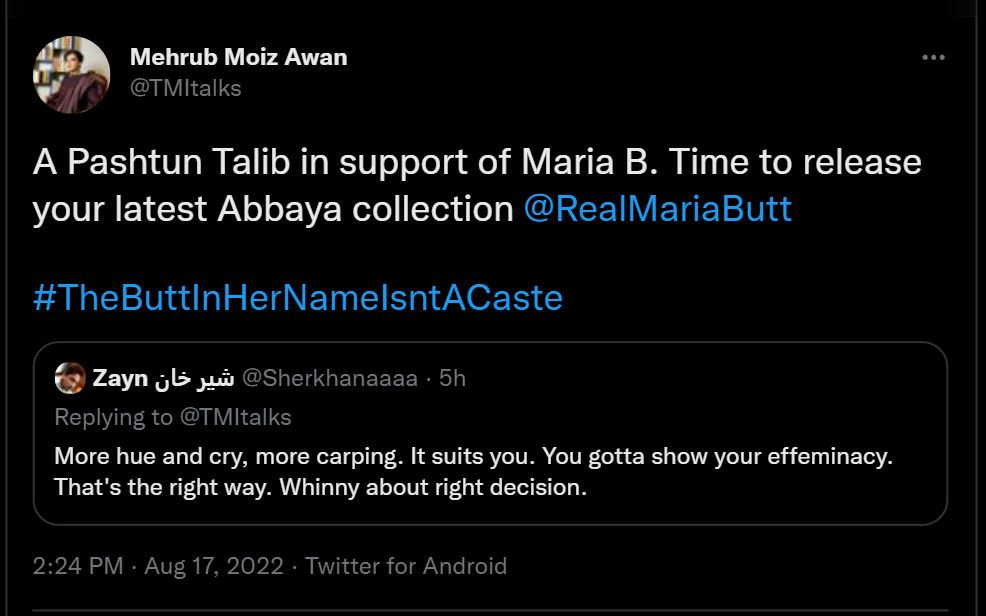 We have yet to see where this banter goes.

Until then stay tuned to WOW360 for more news and updates.