Sunday, June 26 2022
Top Posts
3 DIY Hotpot Recipes You Can Make at...
5 Tips to Keep Your Hair Sweat-Free During...
Fawad Khan to Make Debut in Ms Marvel...
“Women Can Accomplish Anything They Set Their Mind...
TikTok Releases First Album of Viral Hits
Mehwish Hayat Makes Her Debut as a Djinn...
‘Girls are No Less Than Boys’ Says Pakistani...
Punjab Government to Provide Scooties to All Female...
Is Akshay Kumar’s Upcoming Film ‘Raksha Bandhan’ a...
On This World Music Day, Spotify Celebrates K-Pop...
Food 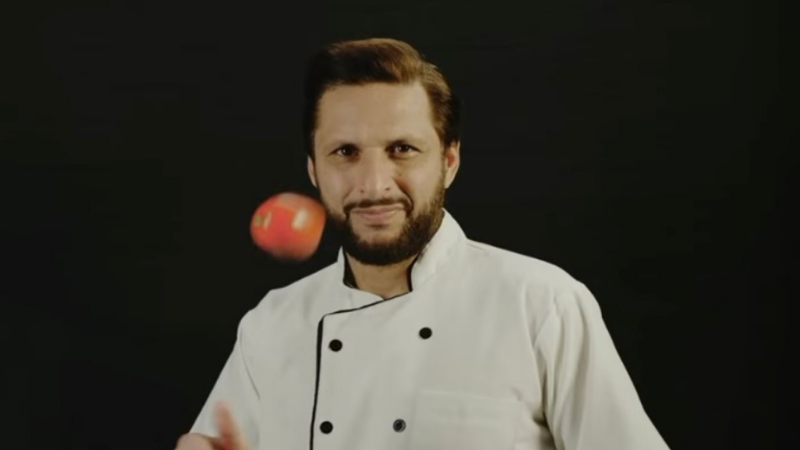 Shahid Afridi is set to launch Lala Darbar, a restaurant in Dubai, named after his famous nickname.

The legendary Pakistani all-rounder hails from the Afridi tribe of Pashtuns. The word Lala is put in front of names as a sign of respect amongst Pathans and other ethnicities often used when referring to an elder brother. Shahid Afridi also known as Boom Boom Afridi is also fondly referred to as ‘Lala,’ so it makes sense why the cricketer chose Lala to name his restaurant.

The former captain announced the good news on Instagram. We see Afridi gearing up for an exciting adventure in a video uploaded on the platform. He proceeds to slice a tomato dressed in a chef’s jacket and finally juggles with another while smiling at his audience.

Looks like Lala has some great plans for his upcoming venture. The restaurant’s logo is then revealed, featuring the signature Afridi pose, which is truly iconic. The video is captioned, “One step closer to the big announcement ~ Revealing Soon.”

He then teases his fan following, “Get ready to give your taste buds a mouth watering triple tarka! – Dubai”

The restaurant promises to offer authentic desi food to the residents of Dubai.  Let’s hope one day, Lala launches his restaurant line locally too. Given his fan following in the country, it might just turn out to be a great success.

Here’s to wishing Lala all the very best for his future endeavors.

The rumor of Shahid Afridi’s daughter, Aqsa Afridi, getting engaged with Pakistani fast bowler Shaheen Afridi, made rounds on social media on the weekend. Fans assumed this might as well be a false rumor because Shahid Afridi’s eldest daughter is not yet old enough. Other than that, the families had made no announcements as yet. Due to false assumptions and news going around on social media, Shahid Afridi cleared the air.