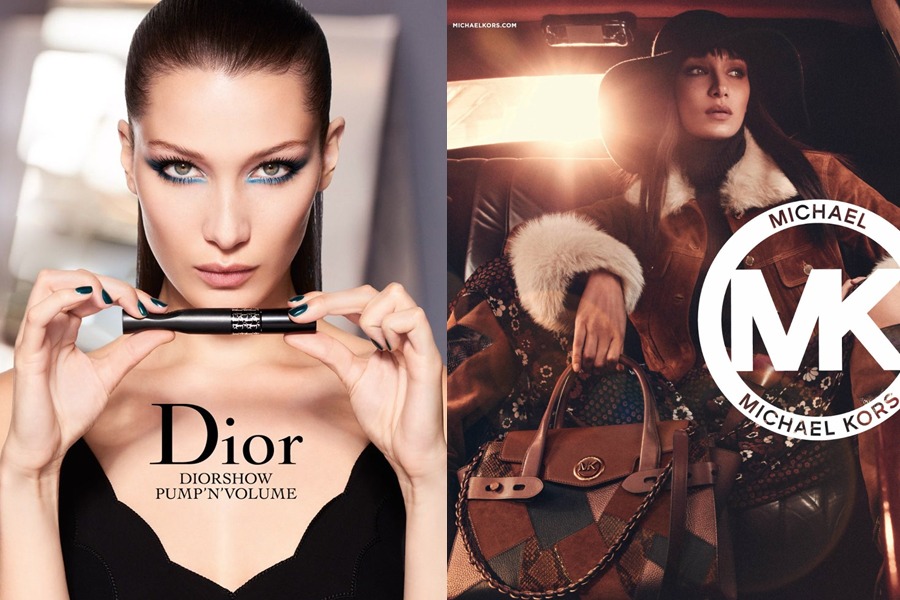 Supermodel Bella Hadid recently participated in a Palestine protest in New York chanting Pro-Palestine slogans. She supported her ancestral country wholeheartedly and wore a keffiyeh — a scarf with the traditional Palestinian print.

As a model and an influencer with a massive following of over 42 million on Instagram, Hadid knew she was risking millions worth of endorsements by showing her support for Palestine but regardless, she went ahead and did what was right even though when this could jeopardize her career by all means.

She’s involved in actively educating people about Israeli atrocities by using her 42 million followers strong Instagram account. It surely is the true loyalty to mankind and her Palestinian roots.

Her actions obviously had consequences, and news of her losing endorsements started rolling in just yesterday. A clip is circulating on social media where Bella Hadid’s poster is removed from a Micheal Kors store. This hints that after all, Hadid’s contracts have been cancelled or likely won’t be renewed for next term.

girl nobody buying from michael kors bella hadid’s campaign was your lifeline 😭 pic.twitter.com/shNB741225

Popular influencer Mia Khalifa said in a tweet that “Dior can burn in Marshall’s” for firing the model based on her political viewpoints.

If Bella Hadid lost a Dior contract for supporting Palestine and standing against apartheid, then Dior can go burn in Marshall’s.

Even though the model or the brands have released no official statements, Hadid’s face is taken off from more and more products of these brands, which proves, this is pretty much happening behind closed doors.

Bella Hadid just lost her dior contract??? for supporting Palestine??? for standing up for human rights??? ok then everyone should boycott Dior. pic.twitter.com/KjjVNVjuO7

The fact that Bella hadid is being silenced, got her brand deals taken away from her including her dior brand and her family’s address is being exposed only because she was protesting for Palestine really got me mad this morning.

bella hadid was banned from dior.
dior is the one who need her lol

Fingers turned to Gal Gadot, who openly supports her country Israel and doesn’t face the music for her political views

Apparently Bella Hadid has been banned from Dior and her address leaked because of her vocal support to Palestine (her family’s country). I did not see the same energy with Gal Gadot when she openly supports her shitty Zionist country.

Guys, we were so loud telling celebrities to be vocal about Palestine. Now that Dior has responded to Bella Hadid by terminating her contract, its our responsibility to boycott them. We can't keep going only halfway.

While some of us have a different perspective altogether

Dior and Micheal Kors are high-end brands, and people from third world countries such as Pakistan don’t even fall under their target market.

i cant even afford dior so this is the easiest boycott i have ever done pic.twitter.com/w6w3Edf0LG

Here’s what you need to see today

She said is a post: The way my heart feels. To be around this many beautiful, smart, respectful, loving, kind and generous Palestinians all in one place… it feels whole! We are a rare breed!!